Four months have passed since Mayor Steve Adler stood on the balcony at City Hall and got serious about Austin music. Businesses are contracting, live music venues are losing the rent war, and the capital’s golden geese – musicians – face extinction in a changing climate of affordability. 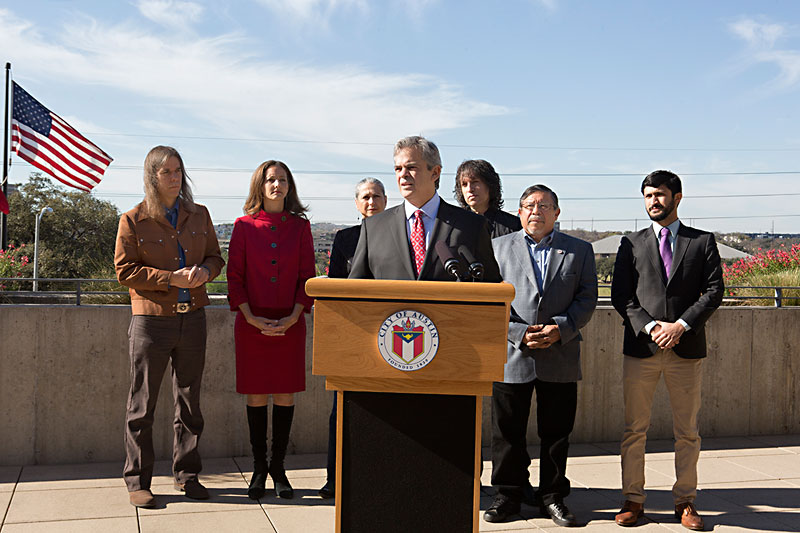 That morning, Adler, flanked by musicians and artists, unveiled his Omnibus Resolution, policy proposals aimed to stimulate the local music and art sectors. The mayor directed city staff to review the Omnibus and return to the City Council Economic Opportunity Committee within 90 days with a plan of action. One hundred and twenty-three days later, the report, titled “Music & Creative Ecosystem Stabilization Recommendations,” has finally been made public.

The document was authored by various municipal employees in the Economic Development Department after Austin’s Music and Arts Commissions weighed in and public hearings for community feedback were held. Those expecting a concise listing of refined proposals will have to contend with a kitchen-sink approach instead. Think of its epic 68 pages of recommendations, analysis, and summary as a guide book for City Council, who can now pick and choose from the dozens of individual recommendations and vote them into action.

That body politic will have plenty of downtime to digest the lengthy report since they recently adjourned for summer break, returning to the dais July 27 for budget discussions. A primer on the report breaks down into 10 “Priority Recommendations,” all chapters consisting of policies, programs, and ideas for specific sectors of the industry. They are: Affordable Space; Agent of Change Principle; Cultural Tourism; Entertainment License; Incentives, Tools & Loans; Land Use Regulations; Music Genre Development; Permitting and Licensing; Professional Development; and Revenue Development.

Each concludes with a breakdown of information that tees it up for Council, citing established models, benefits, an implementation timeline, what departments would take the lead on each initiative and who could be partners, plus – most importantly – an estimated budget. As with the mayor’s Omnibus itself, none of the proposed measures assist musicians or venues directly with city funding. Instead, the “Ecosystem Stabilization Recommendations” offer policies to stimulate industry development and make it easier for creative enterprises to operate.

The full array of recommended music proposals alone is dizzying and in some cases it’s difficult to interpret intent because of governmental gobbledygook, so here are selected aural aspects of the staff report worth fighting for:

This policy means to quell sound disputes between residential buildings and music venues, and places the onus of adaptation on the newer party. If the venue was there first, the condo must adapt, but if a new club opens in earshot of an existing residence, it must adjust accordingly.

The progressive proposal, citing San Francisco and the United Kingdom as successful models, would preserve and protect existing music venues from Austin’s rapid Downtown development of hotels and condos. A bonus: Agent of Change measures can be applied using existing resources and, thus, come at no budget increase.

Austin’s club owners have been outspoken about the need for easier permitting and streamlined regulation for live music venues:

“A live music venue must obtain upwards of 16 different permits to operate. That process involves seven different city departments, including the Economic Development Department, to provide Sound Impact Plans that make recommendations on sound permits,” states the report. “The purpose of creating an entertainment license is to provide a single point of contact for entertainment establishments. It also serves as a mechanism to incentivize venues that value and incubate live music, and encourage non-music venues to consider hosting live music.

“The goal is to raise the standards of how live music venues are run, how artists are treated, and to lower the cost and difficulty of permitting for those venues.”

Complementary to the Entertainment License, the concept of a live music venue practice guide – folded into the Revenue Development Section – lays the groundwork for the city to be able to provide incentives for clubs that meet quality standards in terms of safety and superior treatment of musicians. Such incentives could include:

• Live music venue designation with a plaque or display

Other worthwhile strategies in the report’s Revenue Development section:

The Revenue Development section also calls for the creation of a city-run online radio station that only plays Austin music. While online radio isn’t a highly profitable model in itself, the station could generate royalty payments for local musicians by using their songs as hold music for City of Austin departments, and potentially, in a network of businesses.

While the report attempts to address venue preservation through engaging developers in the Land Use Regulations section, which discusses revising Austin’s land development code and incentivizing builders to include creative spaces in new developments, few solutions are offered that would help culturally important venues from being priced out of their space. Last year’s Hole in the Wall scare illustrated the point.

Still, there are intriguing ideas floating among the minutia in the report.

One independent recommendation calls for the development of an educational campaign to promote patronage of local musicians and venues. In the Cultural Tourism section, another proposal details a plan to create a Walk of Fame for Austin musicians, similar to the Hollywood Walk of Fame. Where deceased local acts have been previously honored with plaques outside the Long Center, the new “Music Walk of Fame” project is planned for the Seaholm District (likely on Cesar Chavez) using funds donated by the owners of the nearby Green Water Development.

“With the need for creative programs to drive tourist traffic to the downtown venues, there’s an opportunity for the celebration of Austin’s musical heritage to receive a transformation,” offers the report.

Anyone who anticipated the completion of the staff report as an end game misunderstood how this sort of municipal process works. This is all still the beginning of a protracted campaign by Austin’s government to try and find a way to sustain the arts among pricey growth. What the Austin City Council and its constituents rally behind in this collection of ideas is the next step in a complicated sequence.

Pour a cup of coffee, get out your reading glasses, and take in the full report here.

Mayor's Omnibus Resolution: Where's the Fire?
How urgent is the plan to aid the music and creative sectors?