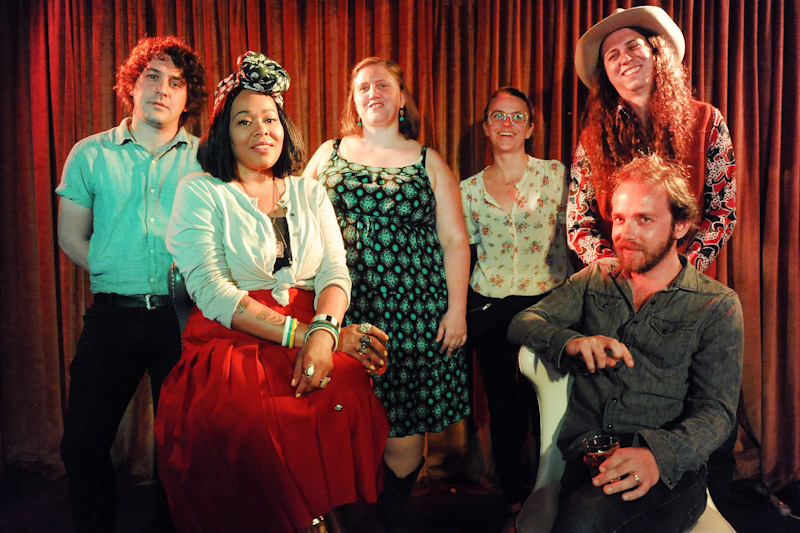 By year’s end, their passports will have amassed new tattoos, far flung audiences will have experienced their music, and they’ll have become a family of sorts – having traveled side by side, backed each other live, and shared a life-changing experience. When the new ATX6 first convened last Monday for a photo shoot at Eastside venue Stay Gold, it felt like the first day of summer camp. Some we’re perfect strangers, some loosely acquainted through the scene, some old friends.

“I was so interested to see who was going to be here, because [organizer] Chris Brecht didn’t tell anyone who else was on this,” beamed Mayeux, the young frontman of swampy tonkers Mayeux & Broussard. “The first person I saw was Elijah Ford and I was like, ‘Awesome!’ We’d run into each other a few months ago on tour in Nashville and became friends. The next person I saw was Beth Chrisman and I was like, ‘Fuck yeah!’

“Everyone else was icing on the cake.”

One by one, the full six-pack arrived:

For all the common ground these artists trod, many never met before last week. They got familiar fast, drinking beer, discussing accompaniment of each other’s sets, and passing cell phones around to get everyone’s number. New friendships had already been struck.

Adventuring for the ATX6 starts in France for Austin Week, Sept. 11-20. They’ll play a handful of shows there, including gigs in Paris and Austin’s sister city, Angers. November 15-20, they gang storm the Great White North for Indie Week in Toronto. Other destinations, likely in the UK and Scandinavia, are yet to be announced.

“The idea is you take six musicians from Austin who are each excelling in their own corner of the music scene with their own bands,” he explains. “We pull them away from their own bands and take them on the road to international music festivals with no idea how they will fare. Sometimes they didn’t know each other beforehand, and often they don’t speak the native language of where they are.

“They’re forced to bond on a level they wouldn’t normally as players in the Austin music scene.”

That makes for good television – another component of the ATX6. While the musicians venture internationally, Brecht employs his handheld camera, filming them playing and documenting their exploits. Each year, their travelogue breaks down into a six-episode series, which will eventually air on KLRU-Q. In the final episode of the first season, a line with hundreds of people forms on the street of the venue they’re playing in Hamburg, Germany, for the Reeperbahn Festival.

Trying to figure out what the commotion is, Dana Falconberry asks someone what’s going on?

The bill of Austinites then played to a sold-out house. After the concert, Jesse Moore describes it as the “most attentive audience any of us have ever played to.”

“Their confidence quadruples in the course of one year,” Brecht says of past ATX6 performers, which continued last year with Jonathan Terrell, Gina Chavez, Elsa Cross, Silas Lowe, Jana Horn, and Brian Kremer. “I think it has a lot to do with being honored. There’s not a lot of times musicians get to feel honored.”

There’s been verifiable success in ATX6’s past iterations. According to Brecht, McHone – after being seen live in action – was booked back to France for a nice music festival payday; Terrell scored a French label to release his solo album (last year’s Past the Lights of Town); and Mrs. Glass and Falconberry earned foreign licensing deals from their exposure.

For Chrisman, who often finds herself in support roles due to her top-notch fiddle and vocal harmony skills, ATX6 is a welcome opportunity to step out as a solo artist.

“I’m excited to get to do something different,” she says. “I’m always part of a band with Carper Family and High Plains Jamboree, so it’s nice to do something as a songwriter – playing guitar and singing my songs instead of being in a full band setting.”

Malano, a pure vocalist who doesn’t play a guitar or piano onstage, looks forward to collaborating with her new musical family and seeing how that reshapes her material.

“I feel like when you work with the same people and do the same thing, you have the same sound,” she offers. “For me, I’m an artist first. I’m just putting what’s in my heart out into the world, but my music is a canvas that changes by who I play with.

“I don’t know how this is going to turn out, but I’m going to make the best of it and hopefully I’ll transition into another place in my career,” Malano continues. “Not necessarily that I’m going to start booking more gigs, or selling more CDs, but it’ll help me grow more as an artist than if I just waited here in Austin hoping for something to happen with my band. So I welcome it.”

“This whole trip is about challenging themselves in a non-generic environment,” he says. “It leads to an experience that these musicians will take with them forever.”