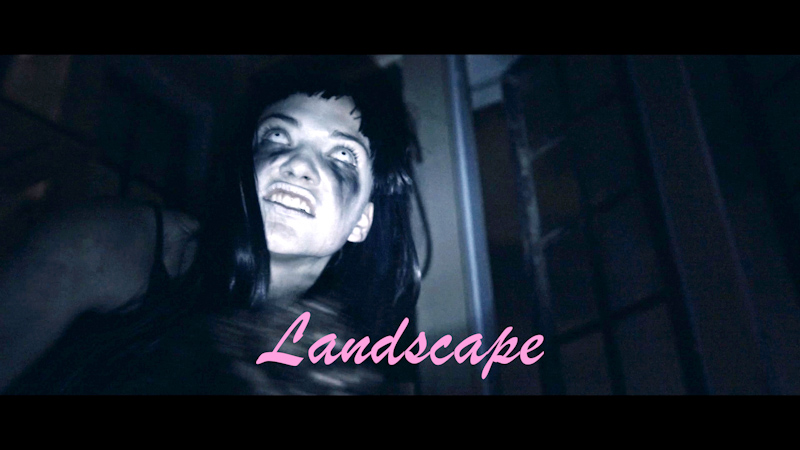 Violett Beane as Ada in "Landscape"

In the chilling new video for Eyelid Kid’s “Landscape,” the Austin electro-pop act’s frontman Paul Grant awakes in an old empty house. Shining a lamp around the vacant estate to discover clawed-up walls and a foreboding basement stairway, he soon realizes he’s not alone.

The story of how the video was made is a daring adventure in its own right.

It began at a house party in Austin’s historic Hyde Park neighborhood, where Grant wandered off the property to find a quiet place to take a phone call from cinematographer Garson Ormiston. As the two discussed music video ideas for Eyelid Kid, Grant found himself in front of a large Victorian-style home that appeared abandoned. He turned the doorknob – unlocked.

Grant returned to the party to share the discovery with his girlfriend Violett Beane, a homegrown actress who plays Jesse Wells on CW drama The Flash. With equal measure of intrigue and trepidation, the two explored the vacant midcentury estate, finding room after room, an out-of-commission elevator, and long, tunnel-like closets connecting a maze of bedrooms in the dusty, rundown relic.

“When we walked in, we said, ‘This has got to be seen by people. We have to make a video,’” recalls Beane, who directed the video. “Then we just sat there in the house and formulated the whole concept. I wanted to try something different than what I’ve been doing, which is playing the good girl, and we thought, ‘Why not a horror music video?’”

Beane spent the next week accumulating wardrobe, makeup, and props to match the dark, gritty aesthetic of their video vision. Ormiston acquired a Sony A7S camera specializing in low-light shoots and duct taped a flashlight to it. Grant printed off bogus location release forms and put them in a professional-looking portfolio with contact information for a fictitious landlord, John Spearman, plus head shots of Beane, and manager agreements.

“I just collected anything official that looked like it could validate this project,” explains Grant.

The run-and-gun-style shoot began at sundown and lasted through the night. Beane, donning black face paint and iris-deleting contact lenses to portray Ada, propelled the action by scurrying inhumanly around the set. Eyelid Kid’s stage dancers, twins Morgan and Mackenzie Taylor, adapted their glitchy dance routines into a paranormal ritual that synchs up with the track’s breaks and drops.

The video’s supernatural beings weren’t the only unwelcome guests that night.

At midnight, the video shoot was interrupted by four police cars racing to the scene. Officers charged up to the house to stop what they thought was a breaking and entering in progress.

“They told us that someone had called and said there are lights on in this house and there isn’t supposed to be. They wanted to know what we were doing,” remembers Beane. “We handed them the portfolio and said, ‘We’re filming a music video. Here are our permits. You can call John Spearman.’”

“They pulled out a flashlight, looked at the form for two seconds, then closed it up and were like, ‘Cool,’” laughs Grant. “They were really serious at first. Then the tone shifted so fast. They started exploring the house saying, ‘This is creepy.’”

It took until 5am, nearly sun-up, to complete shooting. Then they packed out and left the old house standing empty – exactly as they’d found it.

Eyelid Kid releases Hometown on July 29 with a show at Cheer Up Charlies that will feature the Taylor twins dancing and band member Sam Jordan – not featured in the clip – on drums. Beane, who acted, directed, and edited footage for “Landscape” can be seen on The Flash Tuesdays, 7pm CT.

The exact location of the abandoned mansion remains undisclosed.