Deep cuts and musical tributes, but no pink Crustacean

Medicine’s Rod of Asclepius stamped each shoulder, giving way to hemp leaves cascading down the front, back, and sleeves, which at the elbows came stitched with the scales of justice. Legalize medicinal marijuana? Five consecutive years of summer tour warm-ups in Austin during May yielded a first at the Moody Theater Monday: Jimmy Buffett wore a blazer. 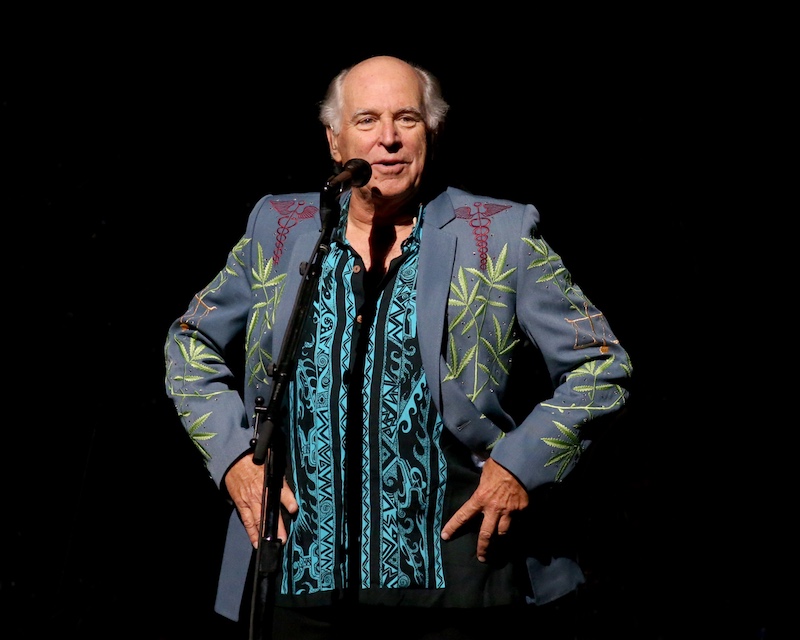 “Manuel’s [American Designs] in Nashville,” announced the cult leader two tunes into a nearly two-hour, 21-song set last night at the home of Austin City Limits, while stroking a lapel. “This was on a mannequin.”

Buffett, 70 this Christmas, later pointed out that Manuel Cuevas’ world famous designs included “Prince’s butt pants,” the first (and slightest) of three musician tributes the Mississippi-born, Austin Studios-rehearsing singer paid in his second appearance at the venue. His now annual Austin pop-up shows began there on May 30, 2012, followed by a pair of appearances at the Circuit of the Americas, May 5, 2013, and May 31, 2014, and last spring’s sardines delight at Stubb’s, May 26, 2015. This most recent visit to “Margaritaville” – the song was partially written in Austin – may have been the most intimate.

For starters, the bandleader of 11 group members began the show with an extended rap about some eight years of tour fine-tuning in the capital city. (Wait, and only five shows!?) Paying tribute to his local mentor Jerry Jeff Walker, who opens his Frisco show on Saturday in the Dallas-Fort Worth metroplex, Willie Nelson’s statue out front (“Since he’s still alive, I wonder how Willie feels about that”), and Austin itself, Buffett uncharacteristically went on at length before ever playing a note.

“What are you drinking?” he said turning to a bandmate. “Who are you going home with?”

In fact, the fiesta got off to a slow start. The frontman explained that this year’s I Don’t Know tour sought to revive songs the traveling tiki carnival hadn’t performed in a decade or more. “Presents to Send You,” “Migration,” “Cowboy in the Jungle”? No such luck. Instead, nostalgia only went back as far as 2009 and 1996 respectively on the one-two of openers “Summerzcool” and “Only Time Will Tell.”

Before long, however, the band was functioning at 80-proof, Floridays’ “Meet Me in Memphis” cruising its namesake’s Beale Street, and tour moniker “I Don’t Know (Spicoli’s Theme)” reviving 1982 teen film yuks Fast Times at Ridgemont High. Who recalls that the first name of Sean Penn’s titular stoner was Jeff? For “Margaritaville,” the host welcomed Hollywood mega-producer Frank Marshall onstage to play guitar and sing harmonies with second lieutenant Mac McAnally.

McAnally’s solo turn on the only song Duane Allman wrote by himself, instrumental “Little Martha,” segued the band out of Caribbean bar band mode – congas, steel drums, trumpet, back-up singers – into a bluegrass cluster at one end of the wide stage. Six string-benders, from mandolin to Temple native Doyle Grisham’s acoustic slide, and one accordionist picked as Buffett sang to the lords of Easter Island (“Delaney Talks to Statues”) and then honored his onetime neighbor Glenn Frey with their co-write “Gypsies in the Palace,” about a friend of theirs who impersonated the the king parrothead in order to stuff a couple of girls into the singer’s Porsche, which ended up in a creek.

Halfway through the house-sitting cautionary, the band launched the Eagles’ “Take It Easy.”

That proved the most raucous moment of the night, the subdued house not at all decked out in its usual Mardi Gras-style dress, nor whooping it up like depraved tequila sexegenarians.

“Is tonight a continuation of this past weekend or warm-up for Memorial Day,” wondered Buffett, perhaps noting the tame audience.

“Barometer Soup” proved a late-set surprise, Buffett’s meticulous vocal melodies imbuing one of his standard three-minute Nashville song sprites with typically seafaring fun and a touch of melancholy. “A Pirate Looks at 40” reminded once again why when Bob Dylan and Joan Baez reunited in 1982 they performed a duet of the song. Dedicated to Guy Clark and Merle Haggard, the sole encore and Buffett’s standard solo acoustic walk-off slot saved the very best for the very last: Jerry Jeff Walker co-write “Railroad Lady” (“South Station on Boston to the stockyards of Austin”) from his 1973 reinvention into future resort magnate, A White Sport Coat and a Pink Crustacean.

Make that a blue Sativa blazer and no Crustacean. 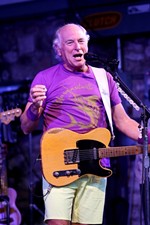