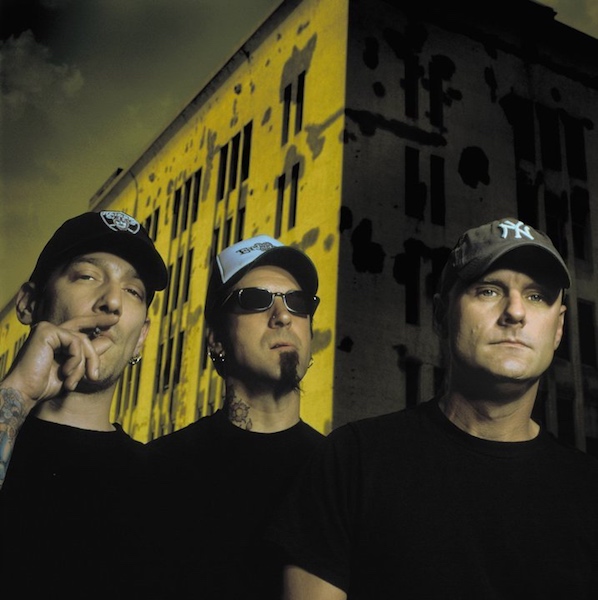 Austin Chronicle: Y’all have indulged other projects the past few years: Cutthroats 9, Celan, UXO, Pigs, A Storm of Light. How do you know when it’s time to reconvene Unsane?

Vinny Signorelli: We always have a good time, and the intensity is true. When you’re playing, you’re feeling that grit. You don’t forget that. When Chris got hurt, I got hurt, so we had to take this hiatus for a while. Eventually the magnet drew us back into orbit.

VS: I’d gotten a torn muscle, abscess, sepsis, misdiagnosed, was dying. I was in the hospital for six months. It took me four years to recover properly. I’m doing fine now. The playing is helping, actually.

CS: It was forever ago. Jumped by a couple of guys in Vienna.

VS: We both have the same scars! [Spencer and Signorelli lift up their shirts.]

AC: Is there gonna be any new music down the pipeline?

DC: Yeah, we hope so. For now, we’re gonna do this tour and if it goes well – and I don’t see why it wouldn’t – sometime in the fall we’ll start writing again.

DC: We’re not gonna do a full U.S. tour until we’ve got a new record. This Europe thing came up around Christmas. We started getting phone calls from festival people, “Would you guys be interested?” About five of ’em – it’d be a fun little run. So we’re doing festivals and some shows in between.

CS: When people are offering you shows, it’s like, “Why not?” Even without the money, you’d have the opportunity to play for that many people. When we first started out, we had to work to get shit together.

DC: There was a lotta 10 months outta the year on tour.

VS: Going to his house, taking his TV and his bong.

VS: The police came and said, “You gotta give it back. It’s a totally different instance. You stole from him. [The show’s] something you did under contract.” We went to his house.

VS: His roommates said, “Take what you want.” They knew he was a dick.

CS: I had nothing to do with this. [Curran chuckles in the background.]

VS: It was us, 7 Year Bitch, and Alice Donut. It was in San Diego or something like that?

VS: He wouldn’t pay us. So we went to his house.

DC: He skipped out on a $100 guarantee or something.

VS: Ninety percent of everybody was trippin’. They were doing donuts in the middle of the street [chuckles].

DC: So to answer your question, yes, we’re likely making a new record.

AC: Is touring easier now? Now that you’re the elder statesmen in a way, do you get a little more respect?

DC: Generally the draw is bigger. We do okay. We don’t sleep on people’s floors next to cat litter boxes anymore. So in that respect, yeah, touring is definitely easier.

VS: Even now, at rehearsals, I feel better about it than when I was younger and crazier. It’s the same thing, but I’m just feeling more direct with it.

CS: I feel less like I’m being forced to do something with a cattle prod [laughs].

VS: The first rehearsal we did, it just came back. 'Cuz I was worried: “I just hope this enthusiasm, magic, whatever the fuck, will come back.” We sat down and played, and it was still there. It felt like we hadn’t played for months, instead of years.

CS: I personally never realized how good the chemistry is with this band. Like, Vinny can just go somewhere on the drums and I somehow know where he’s going right back in – and I haven’t played with them in three years.

DC: It’s the instinct factor. You don’t necessarily worry about the next part or where the next guy’s going. You hit the string and start jammin’.

VS: Generally I’m always about to fuck up a song, so they know. [Laughter] It’s okay. They know I’ll be back. Throw a life preserver in. Save me! [Laughter] You gotta have fun with it. After playing so long, we smile and laugh after the songs. It’s fuckin’ awesome.

AC: Dave, you tour-managed the Melvins. A Melvins/Unsane tour, surely you’ve done that before.

DC: Oh yeah, we’ve done one. But that’s right when Vinny fell ill. It was the day we were leaving. We ended up having one day off before the tour started, because I was actually running sound and tour managing and playing in Unsane. Rehearsal was in San Jose, and we got Vin into the hospital, then told Buzz [Osborne] everything that happened, and he’s like, “Oh, Jesus. Well, you and Chris come down anyway.”

I went to L.A. with those guys to put the vans together, [Spencer] went to San Francisco to pick up our merch, and we were gonna meet up in San Jose. So I had one day to show Dale Crover and Coady Willis our set. They picked it up like that, and the next day we played a show. We did a whole tour with those guys.

DC: The true die-hard metal fans are generally not crazy about us. We’re not fast or technical enough or whatever for the super metal dudes. But yeah, I think that people that like heavy music like it.

CS: We did this thing with Slayer when they did Undisputed Attitude [in 1996]. There were a lotta guys that came out after that – Slayer fans who came to our shows.

VS: There was that guy who came backstage and said, “You can cut off my mullet!” [Laughter]

DC: Yeah, that’s true. I mean, I wouldn’t say all the Slayer fans liked us, but we did garner some new fans on that tour.

VS: But we were Slayer-friendly. We’d get up on stage and say, “We’re gonna play a few songs, and up after us, Slayer!” And all you have to say is the word “Slayer” and they’d freak out.

CS: And then we’d start, and we’d not have any silence until we’re done. We’d make noise and then we’d leave.

DC: The first couple of shows we were stopping to tune, and then we were just like, “Fuck it.”

VS: [In high-pitched voice] “Slayer! Fuckin’ Slayer!” Then we did some shows and it was a three-band bill with Barkmarket. And they’re like, “We’re gonna go on second.” We’re like, “No problem.”

CS: Dave [Sardy, Barkmarket leader, now a producer] was getting really insulting to the Slayer fans. They were heckling him.

DC: There’s a dozen skinheads in the front row going, “Fuck you, get off the stage!” And he’s like, “You’ve got some nice dick-suckin’ lips, son.” And I’m thinking, “Oh my god, somebody’s gonna fuckin’ stab Sardy.”

CS: And then he took mushrooms and jumped into the audience during Slayer. He was really psychotic. [Laughter] That takes some balls, man – do mushrooms, trip, and then jump into a crowd of people who hate you!

VS: So you understand why we let them go on second. That was a fun tour. 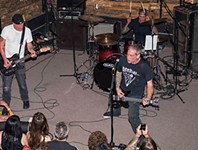