Rihanna, much like Beyoncé or Lady Gaga, boasts an adoring gay fan base, including my three friends who cried at her Frank Erwin Center pop spectacle on Saturday. No question, her show’s humorous and typical, but the power of a modern gay icon with glamour, flamboyance, strength-through-adversity, and androgyny remains a transformative zeitgeist. 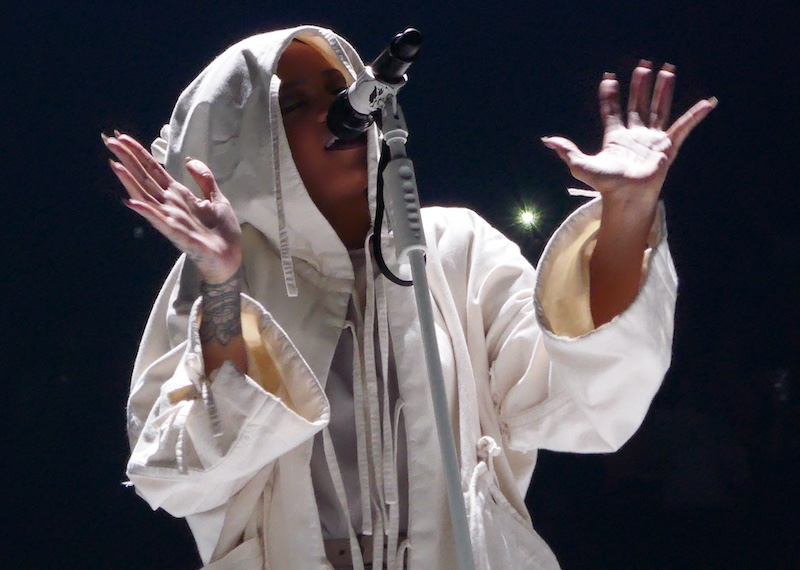 Dressed in a white robe, thigh-high heels, and provocative gray romper, pop’s Antilles-born bad girl looked immaculate, raised high on a platform while singing heartbreaking ballad “Stay.” As the song ended, a floating plexiglass catwalk descended from the ceiling, upon which she strutted and undulated to the jarring industrial synths of “Woo.” Striking and sashaying one hard pose after another, she moved laterally and paused for effect all the while entrancing her faithful followers.

The 90-minute show was arranged thematically, only managing to gloss over her numerous stylistic reinventions since she exploded onto the scene over a decade ago with doe-eyed hit “Pon de Replay.” The 28-year-old singer has been a queer dancehall savant and Billboard Top 100 machine churner since 2007 multi-platinum global smash Good Girl Gone Bad, and continuing through 2012 Grammy-winner Unapologetic, and this year’s multi-dimensional opus Anti.

About an hour into into the concert, Rihanna, now in a glistening black dress, became the ringleader of a dance ball. Giant, ballooned cocoons enveloped the stage as two sequined leotard dancers performed their best vogue poses and death drops during the tom-tom rolled breakdown of somber house joint “Take Care” and the club banger mash-up of “We Found Love” and “How Deep Is Your Love.” A curtain of kaleidoscopic swirls served as the backdrop to the choppy DJ Mustard beat in Anti best “Needed Me.”

Quintessential Rihanna was just as seductive, ricocheting between swooning melodies and aggressive braggadocio with her ultimate kiss-off-to-an-ex swagger: “Didn’t you know that I was a savage? Fuck your white horse and a carriage.” Most fitting with the psychedelic scheme was her rendition of Tame Impala’s “New Person, Same Old Mistakes.” Her timbre wobbled like the neon goo of a lava lamp, flowing between languid and feather-light.

Surprisingly, the latter part of her set didn’t end on her radio-friendly gems, but instead on a smaller note that was more insular and inward-facing. The bombast was dialed down and her voice reigned paramount on the final leg of the show: the campfire-intimate “FourFiveSeconds,” retro-leaning doo-wop of “Love on the Brain, and sexy “Kiss It Better,” redolent of Prince’s pained “Purple Rain.”

Even though Rihanna is a classically carefree modern gal, she has a messy and exhausting past. Anti’s album artwork says it all: Heavy is the head that wears the crown.