An endurance test of both appreciation and relief

Originally scheduled to share the Levitation Tent on Saturday night, Boris, Sunn 0))), and headliner Sleep instead took over a sold-out Mohawk last night for five hours of droning doom.

Neither the club, Levitation, nor Austin audiences are new to Japan’s premier power trio Boris, who strode onstage at the crack of 7pm with easy confidence. 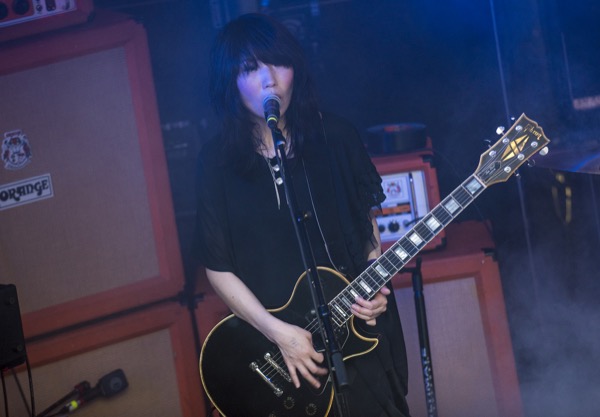 “The Power” flowed out of the ducts first, making a compelling song out of the kind of ambience that would have been an intro for anyone else. Their hourlong set alternated between atmosphere and aggression, from the classically-inclined dreamscape of “Sampo” and ethereal sugar of “Heavy Rain” to the space rock grunge of “Memento Mori” and the stoner punk of “Kilmister,” an ending theme of Japanese anime series Ninja Slayer. The appropriately-titled “Farewell” finished the explosive performance in a sweeping wave of doomgaze power chords and anthemic vocals.

Behind colored lights and billowing smoke, Seattle band Sunn 0)))’s hooded figures stepped in front of a wall of amplifiers for drone so loud it made arm hairs stand on end. Guitars, synth, and a Fender Rhodes keyboard drilled into the depths. There was movement – that of a leaf floating on a swimming pool. 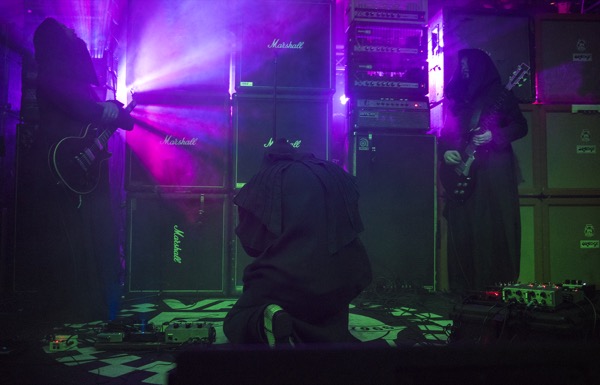 Vocalist Attila Csihar of black metal legends Mayhem eventually arrived, handling an imaginary globe before using his voice as texture instead of a way to convey words. Thirty minutes in, keyboardist/trombonist Steve Moore added recognizable melody. The combination of a wall-o-grunge and minimalist ECM Record-like phrasing clicked surprisingly well. By the time Csihar shrieked and moaned across the stage wearing an outfit made of broken mirror shards, Sunn 0)))’s heaving art-grunge had become hallucinatory.

The endurance test ended after 75 minutes and the crowd went wild in both appreciation and relief. The Seventies blues rock riff of Sleep’s “Dragonaut” sounded like Motörhead after Sunn’s power ooze. Drawing mostly from the doom band’s second album, 1993’s Holy Mountain, and ignoring its 2003 classic Dopesmoker, bassist/vocalist Al Cisneros (Om), guitarist Matt Pike (High On Fire), and newish drummer Jason Roeder (Neurosis) simply varied that same riff. “Aquarian,” “From Beyond,” and new song “The Clarity” all tucked comfortably in the same wheelhouse. Freed from the mic he gargles when in HOF, the shirtless Pike flowered, playing with more versatility and flamboyance than usual.

Though tight in arrangement, the three musicians never seemed to interact with each other. Instead, each man played his part with skill and enthusiasm under the assumption that none would be lost. Ending the 75-minute set with the unrecorded cosmic sludge of “Cultivator/Improve Morris,” Sleep exited in the expected hail of feedback, leaving the audience satiated even if dreams of “Dopesmoker” went unfulfilled. 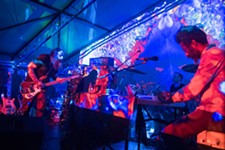