A vibrant lesson in infectious polyrhythms and communal spirit

I’m curled up under the blankets in my crisp Buenos Aires hotel room. It’s unseasonably cold for this time of year, which makes it even more odd to think that only a few days ago we were sweating it out in the Dominican Republic. 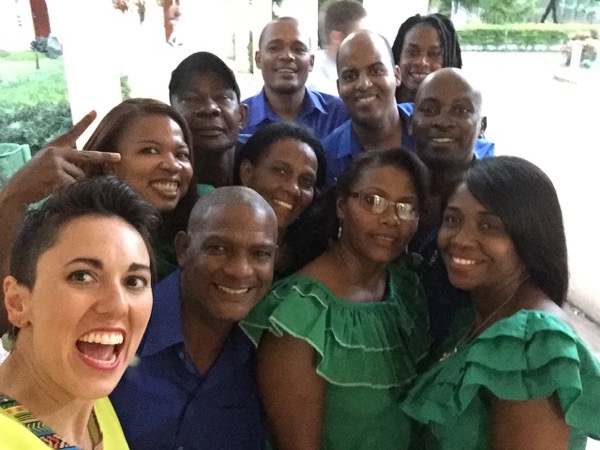 Our journey through the DR began with a vibrant lesson in the infectious polyrhythms and communal spirit of atabales, one of countless Afro-Caribbean styles that give this country such a rich musical history – one we very much respect and want to learn from. Our first concert gifted us the opportunity to collaborate with Raices Folcloricas, a Sainaguá atabales group whose smiles alone made me want to dance. Collaborating with them gave me renewed energy for the week ahead.

They even convinced me to wear a typical Dominican dress for our last few songs together!

During this leg of our tour, I quickly discovered a new love for yuca and plantanos. I mean, who needs gluten when you’ve got these two gems? Arepitas – fried yuca creations with anise – became my food of choice for the trip, with any version of platano (tostaditos, Fritos, maduro) coming in a close second.

In addition to the food, this country’s landscape and fauna are so lush that it’s hard to believe a third of the country lives in poverty. Intersections are filled with people selling anything they can get their hands on – fruit, windshield wipers, bubble-blowing toys, pantyhose, you name it. And Dominicans’ ability to fit up to five people on a small motorcycle is impressive. 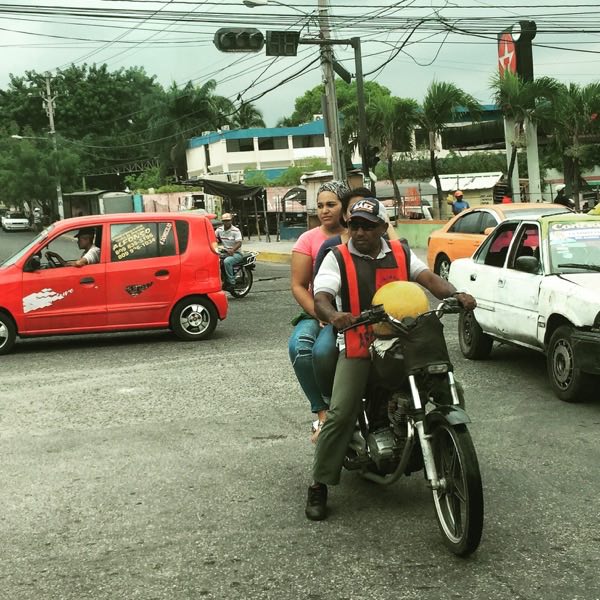 We participated in the art of innovation and spontaneity when the guys and I led the students of Escuela de Artes Hector Acosta in rhythm exercises and a vocal version of Michael Jackson’s “Billie Jean” played by a group of 80 music students. Witnessing the camaraderie, focus, talent, and pure joy in a group that mostly studies classical music was magical.

Our trio was supposed to have another large music class the next day, but ended up with an intimate group of voice and guitar students. I almost lost footing when their petite teacher opened her mouth to release beautiful, full-bodied, operatic tones. She gave us some great tips on yogic breathing and the power of our voices before we lifted ours in another public concert.

Some of our biggest hits with Dominicanos have been our cover songs from Central America – “El Sombrero Azul” from El Salvador and “El Encarguito” from Honduras. And they’ve been gracious in our attempts to cover “Ojala Que Llueva el Cafe” by beloved Dominican artist Juan Luis Guerra. Fortunately, there’s always someone in the audience who can play guira for us! 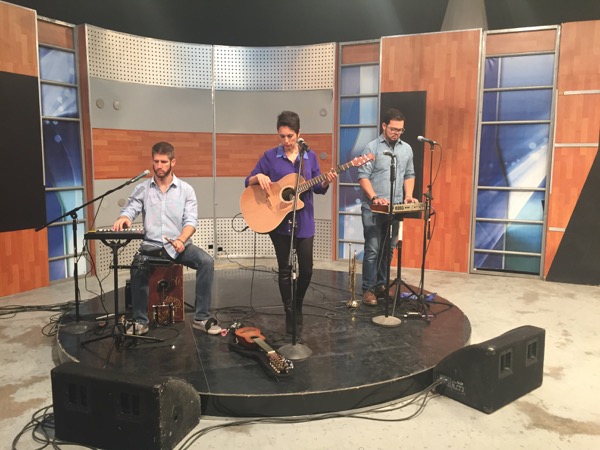 The fourth day started with two early media interviews, during the first of which I tried to knock myself out with my guitar – not something I recommend when you’re live on the most popular morning television show in the country! Fortunately, no facial bruising. The afternoon took us to a beautiful museum and cultural center where kids from the nearby area were bused in for an interactive concert. One student shared his love of the Japanese language, while the girls taught us Dominican slang words that had the crowd laughing.

It’s amazing how restful it is staying in one hotel for a few days in row. Not to mention traveling light. I realized early on in this tour that I’d brought way too much stuff. So I bought a suitcase in Mexico and sent half of my belongings home. My luggage and my heart have been liberated ever since!

Santo Domingo’s Zona Colonial is the oldest permanent European settlement in the New World. It’s odd to me that there’s still pride in Christopher Columbus’ legacy, which we now know is tragic to say the least, but the area boasts a lot of historic “firsts.” After some much anticipated shopping – gotta fill that suitcase again, haha – I went to an intimate mass in a side chapel of Santa Maria la Menor, the first cathedral in the New World, and also took a spin around Calle Las Damas, the New World’s oldest paved street, before catching an Uber back to the hotel with a few gems, including larimar jewelry, which bares a light blue stone only found in the DR.

We capped off our tropical adventures with a show at Green Fest, an Earth Day celebration organized by the U.S. Embassy in Santo Domingo and a slew of Earth-minded partner organizations and artists who grow sustainable foods, create artwork from trash and recyclables, and take great pride in preserving the beauty of a country that deals with some of the harshest environmental conditions in the world. After soundcheck, I strolled through the massive and breathtaking grounds of the Jardin Botanico and the Mariposario (butterfly house) before we took the stage one last time for an eclectic show of collaborations with Mariposa, a group of young female bucket drummers, Dominican songwriter Omar Perez-Then who I met in NYC last year, and multi-instrumentalist and songwriter Luis, who goes by Willy Melody.

A few sweaty selfies later and our DR adventures were complete. Next stop: Argentina, where my journey with Latin music all started 13 years ago! 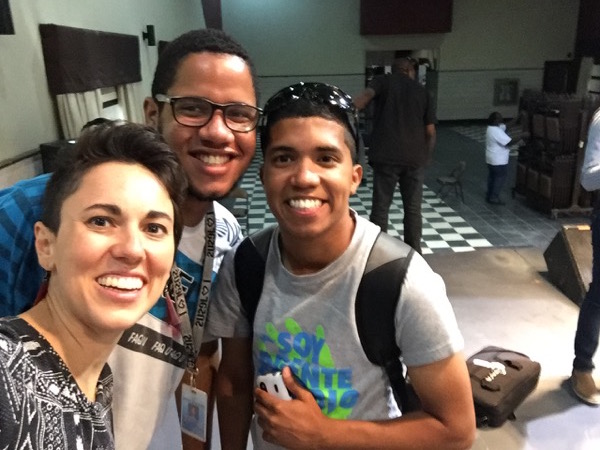 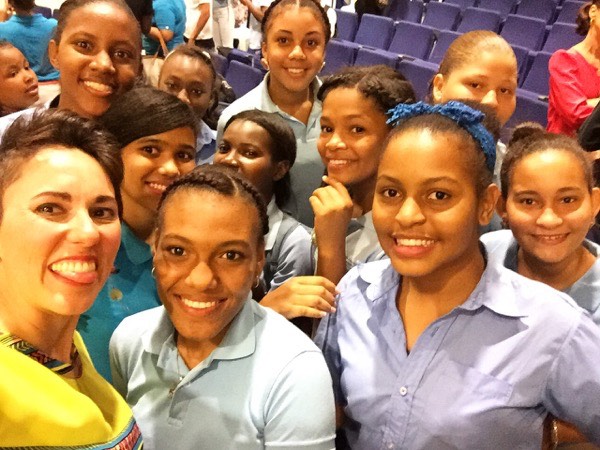 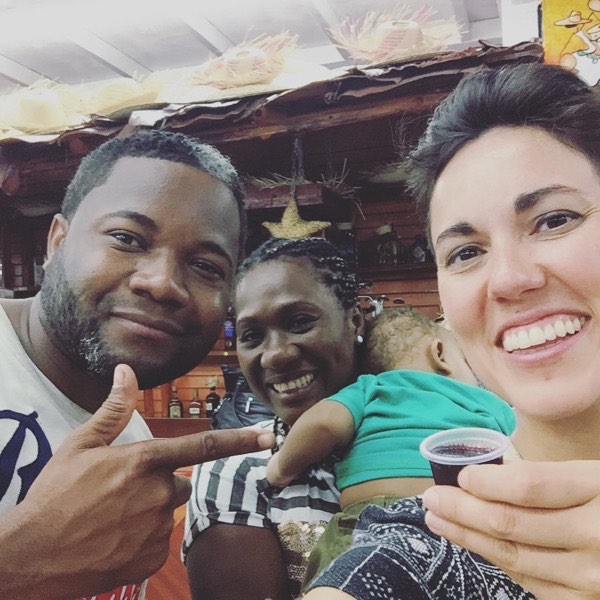