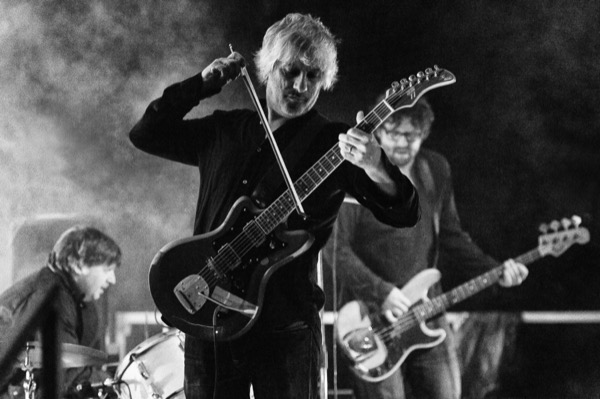 LR: You passed the test! You spoke through the machine, and now ... here I am [laughs].

AC: You’re kicking it old-school with the answering machine.

LR: [Laughs] I am. This is my landline at home. After 9/11, we never ditched it. My family lives really close to the World Trade Center, so we were kind of intimately involved that day. Cell phone towers went down, but the landlines worked. So, we never got rid of ours, kind of superstitiously, I guess. How’s Austin? It was always one of [Sonic Youth’s] favorite cities to visit.

AC: Rainy! Which means, hopefully, skies will clear for Levitation. Speaking of Sonic Youth, you and Thurston Moore were always known for your use of alternate tunings. Is that technique something you’re still employing in your solo work?

LR: It is. I think Thurston’s and my weird tunings lent Sonic Youth a very different sound from the get-go. In the band’s 30 years – aside from covers – there are maybe two or three songs we wrote using traditional tuning. On my new record, I’m using some Nashville, or, “high-strung” tuning, which is basically the upper six strings of a 12-string guitar. It sounds sparkly and bright.

AC: After cooking up your own weird tunings in Sonic Youth, what spurred you to try Nashville tuning? Meaning, a guitar approach that’s still rare, but is common enough to have a proper name.

LR: It’s one of those tunings I’ve heard about for ages and always wanted to try. My friend Matt Sweeney [Chavez, Zwan, Iggy Pop] does this video podcast, Guitar Moves. He interviewed James Williamson, who talked about using Nashville tuning on some Stooges songs – “Gimme Danger” off Raw Power, in particular. You think of that [1973] album as this fierce rock record, yet James is playing this delicate acoustic. It’s incongruous, but so distinct. I watched that episode right as I started work on this new record and suggested we string up one of the guitars like that. It makes your ears perk, that tuning.

AC: I think Keith Richards used high-strung tuning some too, didn’t he?

LR: He did! As did David Crosby, Joni Mitchell, and Lou Reed. That open tuning was in the air, but our using it wasn’t a copycat thing. It was more a technique to make cheap guitars sound better [laughs].

AC: Tell me about your new album.

LR: I just finished mixing it a couple weeks ago with my friend and producer, Raul Fernandez, from Barcelona. Sharon [Van Etten] sings five or six songs, including a duet with me. The album’s a bit more produced than my last ones. I’m excited about it. I’ve just started playing some solo acoustic gigs premiering the material.

AC: So we’ll hear new tunes at your Levitation set?

LR: Actually, no. Tim [Barnes, of Royal Trux] and I will play more of an improv set for Levitation. My solo songs require an indoor, sit-down type situation, so I figured why not cater to the festival atmosphere and do something a little different?

AC: Thurston’s on Saturday’s schedule as well. Any chance for a collaboration?

LR: Actually, our initial idea was to have our sets be one right after the other so I could sit in on his first few songs, but the stages were later switched to better suit what we’re each playing. Now our sets overlap a bit. So, unless our stages are close to one another, it doesn’t seem as easy now.

AC: Bummer. Years ago, you guys played a pair of gigs here for Liberty Lunch’s farewell week. I interviewed Kim Gordon last year, who told me about Sonic Youth’s gear getting stolen that day.

LR: That’s right! We all had to scramble to get new gear at some local music stores. What year was that again?

LR: That’s right. A show we played at Liberty Lunch in 1988 was bootlegged, I guess. Two different LPs were released just a few months back. What an awesome venue that was. One of the coolest anywhere.

AC: It’s still sorely missed here. Are there any Austin haunts you like to frequent nowadays?

LR: Austin always has great eating. And I’m a cyclist, so I like to go on long, 25- to 35-mile bike rides when I’m there. There’s this bike shop I like called Mellow Johnny’s. Sometimes they loan me bikes. And I like to visit art galleries. There’s that mobile art truck there that cruises around town, called Show on the Road. Last year I had some artwork on it.

AC: Eclectic tour hobbies you have!

LR: [Laughs] I eat, bike, and shop for cowboy clothes. The same fun stuff I’ve been doing in Austin since the early Eighties!