Jason Sabala transformed his gymnasium into a lodge. The longtime Emo’s affiliate has torn down the scoreboards and televisions at his alternative sports bar, Midway Field House, and replaced them with rustic logs and taxidermied beasts. Thus ushers the arrival of Austin’s newest event space: Grizzly Hall – opening next month. 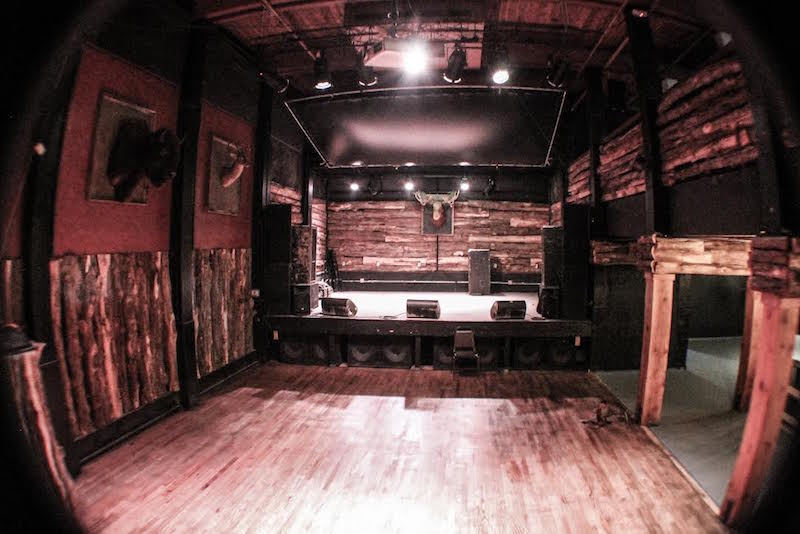 The 500-capacity room at 2015 E. Riverside celebrates an official grand opening on May 28 with Oakland metal trio High on Fire, but doors will open earlier in the month for a variety of musical and non-musical events. Notable concerts on the Grizzly Hall calendar include the lawless triptych of Unsane, Honky, and Fuckemos on May 20, and the other half of British black metal pioneers Venom. The Cronos-led version of the UK trio triumphed at Fun Fun Fun Fest last year, and now core members Mantas and Abaddon encore with Venom Inc. on June 26.

Monday morning, the heavily tattooed businessman sat on the patio of his neighboring coffee shop the Buzz Mill, which shares a lumberjack aesthetic with the new event space, expounding on his vision for Grizzly Hall and reflecting on Emo’s.

Jason Sabala: We finally recognized, begrudgingly, that Austin is a football town. We didn’t get the reaction we wanted from basketball, hockey, and baseball. Football was something that people really came in droves for, rather than a few pockets of transplants taking up corners of the bar watching the White Sox here and Marlins over here.

People ask, “Why not just add music to that?” Well, it’s really hard to book two months out when you don’t know if the team’s going to sweep a series or it’s going to go to seven games! In World Cup, when the U.S.A. didn’t win, that cost us about $15,000. When the Spurs sweep somebody, it costs us money. It’s essentially like gambling. With a Friday night that could be a game six, you don’t book anything, so you can’t have bands on standby.

That was a nightmare.

Also, the cable bill was $4,000 a month! I’d rather pay booking agents and bands. You can’t dabble in both. You have to choose this path or that path. That doesn’t mean that Grizzly Hall can’t show UFC 200. That night, we won’t book a band and we’ll drop down the movie screen to make an event of it.

AC: What else will Grizzly Hall present?

JS: We’re making Grizzly Hall a sister brand of the already successful Buzz Mill. There are things like art shows and big concerts that we can’t do here [at Buzz Mill] based on limited space and weather. We’ve stayed in a pocket of Americana and folk for the most part. Over there, we want to expand. Grizzly Hall can show movie premieres, we can do catered events. The flexibility allows us to do that and sprinkle in a full spectrum of live music.

AC: What’s on the books musically?

JS: May 28 will be the High on Fire show, with [locals] Eagle Claw and Bridge Farmers. May 20, we have the Unsane, Honky, and Fuckemos show, which, for me, those bands were so important to the early years at Emo’s.

AC: Are those acts reflective of Grizzly Hall’s booking slant?

JS: We’re definitely not trying to recapture Nineties Sixth Street. We’ll have some metal shows. We’re working on having a reggae artist who’s playing Coachella. There will also be indie rock – a little bit of everything. We have Tengger Cavalry, the world’s only Mongolian folk metal band. We’re curating multiple types of music, but mostly stuff on the fringes.

AC: It’s difficult in Austin for smaller enterprises to compete with promoters C3 Presents, Transmission Events, and ACL Live. What does it take to succeed in that environment?

JS: It’s a two-prong approach. One, you welcome them, as in, “Do y’all want do something here? Let’s go!” The other part is looking at what they’re not touching. Back in the day, it was simple: C3 wasn’t touching any of the metal and punk rock stuff. Now everyone’s touching everything, so you have to work along the fringes and see stuff that you can create something around. Instead of having a bill where it’s four bands and the three openers sound just like the headliner, I’d rather do something intimate like an art show that’s associated with the band or label. Creative curating is going to be a big part of it.

AC: In 2016 Austin, it sounds more advantageous to be an event space rather than a straight concert venue.

JS: In this town, especially in this South Shore district – with the city growing as fast as it is – there are things that are underserved. I think events are underserved. Whether it’s young Hispanic professionals wanting to do a pingpong tournament or the mayor needing a place to do his acceptance speech, there’s constantly something going on.

I’d call us the poor man’s Marchesa Theatre. We’re flexible. You can come to us with dinner theatre, a comedy show, a movie showing, or a rock show. We can do all of it and, since we’re not in the music district, we can do anything. It’s one-offs and we’re going to be a chameleon. It’s not about a specific scene. You’d have to be very well rounded to be at Grizzly Hall every day of the week.

JS: It’s growing fast. Unfortunately, we’re seeing the Latino community being pushed out past Pleasant Valley. It’s also changing. When we opened a 24-hour coffee place, this neighborhood was sketchy. Now, you can walk from the hike-and-bike-trail to Pleasant Valley and not have anything to worry about. I’d just like to see more Austin brands. I live over here and the only pizza we can get is Dominos, and Mod Pizza is what it is, but if we had East Side Pies, Austin Pizza, and Home Slice, it would destroy!

These property owners are betting on the franchises instead of locally-owned brands, and I’d like to see more local businesses. The condos are still coming and this might be the fastest-growing segment in Austin right now. For us, we have a great property owner who loves our concept and we can stay here as long as we want.

AC: Let’s talk about your history. When did you start working in Austin music?

JS: In 1993, my dad took me down to the Black Cat on Sixth Street. Paul Sessums was a legendary bar owner Downtown. He was a guy that always had an answer for everything. When the health department told him he couldn’t sell hot dogs, he gave them away for free. Leslie was a staple out front – he had his spot. Paul Sessums was like, “If you don’t like it, tough shit.”

AC: Is that an attitude you’ve embraced?

JS: Well, he was always good to me. I worked for him for a year and a half at the Black Cat, and after that is when I hooked up with Craig Merritt [of World Burns to Death] and all the Waco kids. We started hanging out at Emo’s and befriended some people there. One night, I think there was a fight and I dragged some people out and they said, “You want to work security?”

I said, “You’re gonna pay me to fight? This is great!”

So I started on security, busted my ass, and developed a good relationship with Eric “Emo” Hartman, who asked me if I wanted to be the manager. [Butthole Surfers bassist Jeff] Pinkus sold me his shares, and from there I’d save up money and buy shares from Emo’s other partners. Eventually, I owned 49 percent and Emo owned 51 percent, and he gave me a sweetheart deal because he wanted to get out of the business. That’s when I took over sole ownership.

A few years in, I ran into some financial and personal issues and brought [family friend] Frank Hendrix in on Emo’s. Then I took a hiatus and went to Portland, Oregon, and opened a club called Sabala’s. I had called Emo and told him I wanted to do Emo’s there. He said, “Dude, you’ve already established yourself with the bands and people, use your own name!” I said, “You know what? You’re right.”

JS: I went back in with Hendrix, but it was at a weird transition time because, when I was gone, there’d been a falling out between [Emo’s booker] Graham Williams [now an owner of Transmission Events] and Hendrix. We’d hired Graham back in the day and he was family, so to find out there was a falling out was like, “What the fuck do you mean there was a falling out?” There are many stories out there of what happened and they’re all messed up. However it worked it out, we should have never fractured.

Once they fractured, it opened the door for Frank to do the only thing he could and reach out for Charles Attal and C3. So you got yourself in a situation where you just invited the 900-pound gorilla in the room in and he’s gonna book your room. It always broke my heart that that’s how all that went down, because it was a tight-knit family back then.

AC: Where do you see yourself now in Austin – part of the music scene or as a businessman?

JS: I definitely see myself more in the business aspect, because I have this coffee shop and stuff reaching all the way down to San Marcos with Grizzly Grocery. But at the same time, I’m part of this legacy of what’s come out of Emo’s. The best stage manager Emo’s had over the years, Noah Polk, owns East Side Pies. Kevin Crutchfield opened the Longbranch Inn and owned Scoot Inn. Stan Rose opened Yellow Jacket. There’s everything [Barracuda co-owner] Johnny Sarkis is doing, Cody Cowan runs Mohawk, and Graham Williams is crushing it with Transmission.

There are so many more, too. All those guys came out of the Emo’s family tree, and it’s great to see what that tree has blossomed into. That’s the core of it – these people coming from one place and doing their own different things. For me, that next thing is Grizzly Hall. 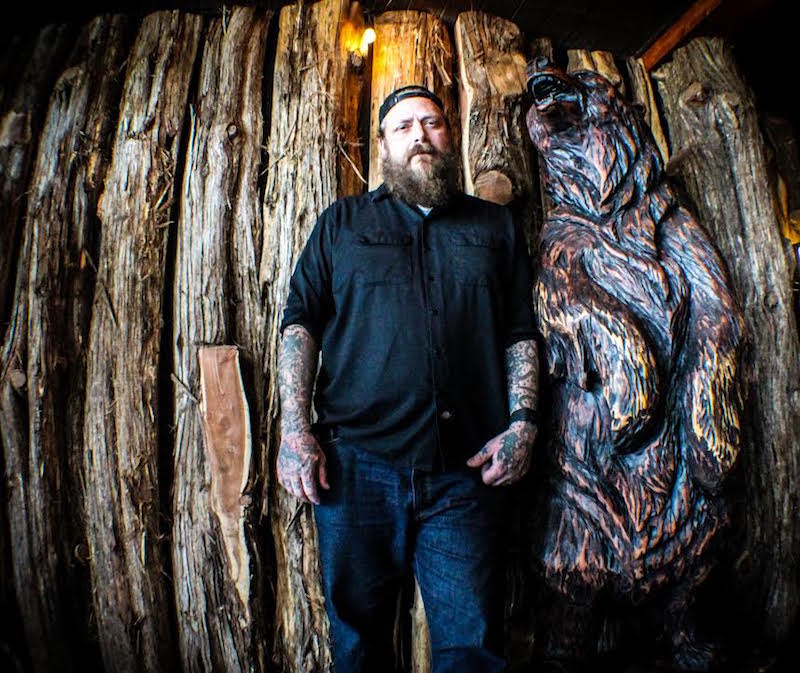