Tony Bennett needs no introduction, but when he gets one, it’s from Frank Sinatra. Before stepping out in a polished gray suit, a voiceover from his late vocal peer promised Bennett would “tear the seats out” with his performance. Turning 90 in August, the singer gave those same seats an obvious workout Sunday night to a near sold-out Bass Concert Hall. 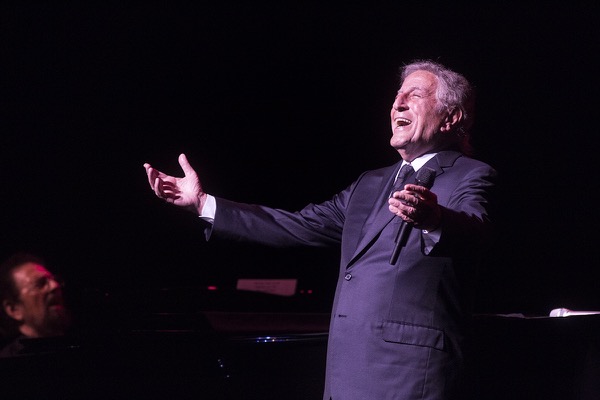 Backed by his quartet – pianist Mike Renzi, guitarist Gray Sargent, drummer Harold Jones, and bassist Marshall Wood – Bennett filled the room with multiple standing ovations and a booming tenor from the moment he stepped onstage. Besides the handful of tweens accompanied by their culture conscious grandparents, the average age didn’t fall below 50. Such an experienced assemblage understood it was witnessing something remarkable every time Renzi rippled the keys and Bennett clutched the mic.

The Grammy Lifetime Achievement recipient eloquently compressed his 66-year career into an hour and 15 minutes, squeezing renditions of his first recording, “Boulevard of Broken Dreams,” as well as “I’m Old Fashioned” and “The Way You Look Tonight” from his latest, The Silver Lining: The Songs of Jerome Kern. The most memorable moment, his microphone-less closing with “Fly Me to the Moon,” sprouted more than a few tears alongside the elation.

Bennett was solo on the bill, but not on the bandstand. His crisp quartet filled the void when the headliner needed a break, instrumental solos embedded in the set creating an all-encompassing experience for jazzbos and newbies alike. Buttery soft grooves evened out Bennett’s shakiness at the beginning.

Though the years have inevitably affected his singing, they haven’t made a dent on the brilliance of his lyric storytelling. The lifelong New Yorker barely moved around the stage, with the exception of a quick dance break during “The Shadow of Your Smile,” but he didn’t have to. His face gave expression to what he was singing, making a large concert hall feel intimate.

As the scent of his cologne hung above the first few rows, Bennett serenaded all sides of Bass equally, his charm effortless. After each big belt, house lights would go up as he bowed to the audience, recognized his band, and took it all in with a smile on his face. Tony Bennett remains in the prime of his life. 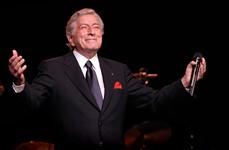 Secrets to Tony Bennett’s Success
What keeps the crooner going? Loving his job, and painting