Third installment stretches from Rancho Texas to the Andes

The sun is setting over Mexico City. It feels so good to breathe in the view and let my body slow to the rhythm of the moment. We’ve been here a couple days, but that tale will have to wait a week. I gotta catch you up on our adventures in Venezuela!

We arrived in Caracas in the middle of the night and got a ride in a bulletproof U.S. Embassy van. The vast economic instability means the streets are dangerously quiet after the sun goes down; no nightlife, and our instructions were to not leave the hotel unless escorted in an embassy vehicle with a red license plate and the number 25. The city smells like it’s on fire. Apparently El Niño has sucked all of the moisture from the land, so the surrounding hills light up and blow smoke into the city below.

The money situation is complicated to say the least. Basically there’s an “official” exchange rate that’s baloney and there’s the real (i.e., black market) rate of 1,000 Bolivares to $1 USD. The embassy offered to exchange $100 USD for each of us so we could get the better rate, but none of us were prepared for the bag of cash we got – 100,000 Bolivares!

The word “inflation” is no longer a mere term from my economics textbook. The next morning we loaded up the van for a six-hour road trip west to Barquisimeto. After a bumpy ride with a fabulously random pit stop at “Rancho Texas,” an arepera with dogs, monkeys, ostriches, and a pig in a pink dress, we arrive in Barquisimeto with enough time to stop at the workshop of Amado Lopez, a famous cuatro luthier. The Venezuelan cuatro is similar to a ukulele, though larger and with much different playing techniques, and Michael ended up buying a beauty. In town, we found a gem of an eatery – Restaurant Oscar y Teresita – where our waiter, Oscar Jr., nearly wept when we left him the equivalent of a $2 tip. He was sure we’d made a mistake and the look on his face when we told him he’d earned it is one I’ll never forget.

With that in our hearts, we arrived at the UCLA for a workshop with the university music students. When an ensemble of professors “opened” for us, it became apparent that we were the ones who’d be learning. From that first workshop – which both moved me to tears and drenched me in sweat – to our concerts in Barquisimeto and Merida, I was astounded at the level of musicianship and humility that we experienced with every note played by Venezuelan musicians we met, including Mafer Bandola.

I’m truly tempted to go back and take a few classes so I can learn how to make music! 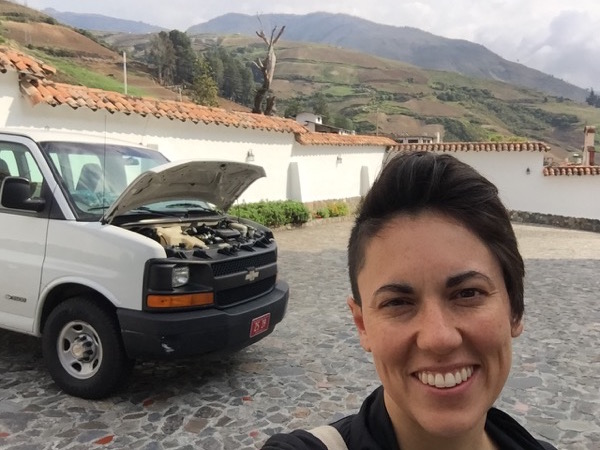 Venezuela gifted us a few travel memories, too. At night, on our way up the Andes to another musically rich town, Merida, the van stopped on us. By the grace of God, it started up after cooling down and had enough juice to backtrack down the mountain to the town of Santo Domingo where we found rooms at La Trucha Azul resort. Once parked, the van gave up the ghost!

The embassy staff worked their magic to arrange morning travel to Merida and we were gifted a jaw-dropping ride through the Andes the next day.

That’s when one of us lost our passport!

Tune in next week.