I grew up here in Austin – raised on breakfast tacos, Zilker Park, and Lyle Lovett. My parents still live in the same house I grew up in, with Shoal Creek as our backyard. That doesn’t mean we stayed put. 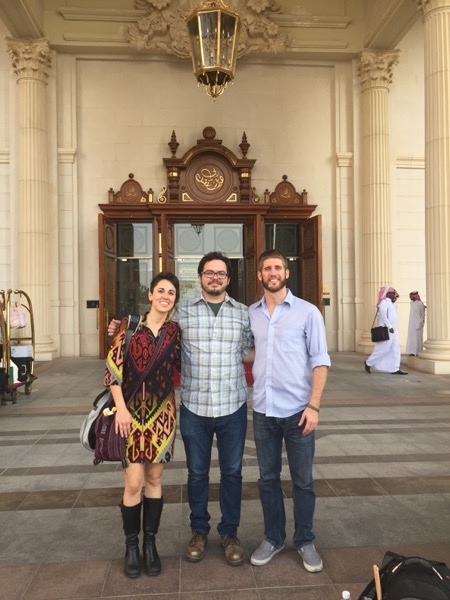 My favorite bedtime stories were tales from my parents’ adventures through Europe in a Volkswagen bus during the Seventies. And war stories from my grandfather’s 35 missions as a WWII bombardier. We spent weekends on the road visiting family and summers creating our own VW camper bus memories with trips to Canada, and Arches National Park in Utah, pilgrimages to Disneyland and Disneyworld, and visits to the Grand Canyon and Florida Keys.

You could say travel is as much a part of me as my Mexican and Swiss-German blood.

Still, I can honestly say I never thought my career would open the doors to so many far off lands. I mean, sure, musicians tour, but I’ve been blessed to have performed in some unique places quite early in my career. Places like Japan, where many musicians only dream of touring, and others, like Saudi Arabia where it’s actually illegal to perform live music.

It feels sacrilegious to even say that in Austin.

Last year, my trio – the party-in-a-box version of our sixpiece – was chosen as one of 10 acts nationwide to serve as cultural ambassadors with the U.S. State Department’s American Music Abroad program. Our mission is to carry the torch first held by the great jazz ambassadors Louis Armstrong and Dizzy Gillespie in 1968, and connect with people in nations that don’t often have access to American artists.

Over the next month, my talented bandmates, Michael Romero (trumpet, synth, guitar, vocals) and Sammy Foster (keyboard bass, cajon, percussion – all at the same time), and myself have our work cut out for us. We’ll perform free public concerts, teach workshops, lead master classes, collaborate with local musicians, and speak a ton of Spanish as we tour five countries in Latin America: Guatemala, Venezuela, Mexico, the Dominican Republic, and Argentina.

Right now, it still feels surreal. This week was full of conference calls with embassies, tying up loose ends at our jobs, packing for our longest tour, and rehearsing popular songs from each country. Presently we’re in D.C. for a short training before we take off on an incredible journey through what I consider segunda patria (second homeland): Latin America. While I’m pretty freaked about giving entire workshops in Spanish without sounding like an idiot (ayudame!), I know the best we have to offer is ourselves.

We’re passionate about connecting with people and the power of rhythm and melody to bridge the chasms that divide. Plus, American foreign policy aside, I’m proud that we get to serve our country with songs, not bombs! Pretty sweet gig if you ask me.

The only thing that would make it sweeter is if you came along for the ride. I’ll be updating you weekly here for the next five Fridays. Stayed tuned for Episode 1: Guatemala! 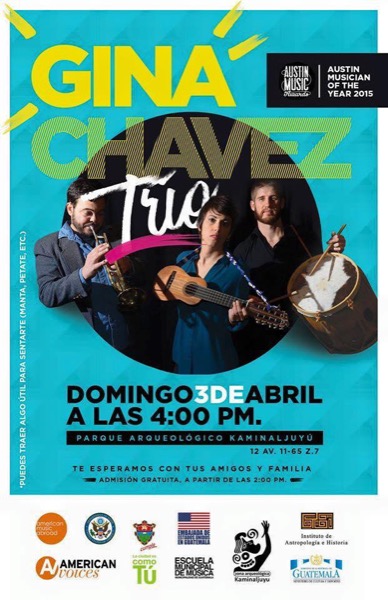 The show in Guatemala is at Kaminaljuyu, a sacred site of the Maya.