They don’t make ’em like the queen of country music

BBC Radio took over Stubb’s on Thursday night, opening with 83-year-old American treasure Loretta Lynn. Queen of country music for half a century, she’s promoting new LP Full Circle, her 40th to hit Billboard’s Top 10 Country chart. Consider the booking another case of a long-standing UK tradition: selling our indigenous music back to us. 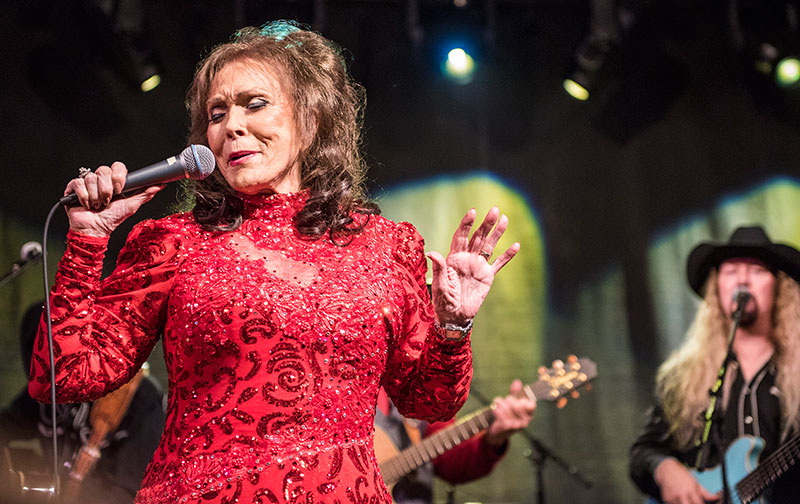 By nature, a festival format isn’t to Lynn’s liking. Given to chatty, off-the-cuff performances, she spent the bulk of her hour-long set taking requests and sticking to classics. The yield rose from her Butcher Hollow, Kentucky, origins and rang across the decades: “They Don’t Make ’Em Like My Daddy,” “I Wanna Be Free,” “Fist City,” and debut single “I'm A Honky Tonk Girl.”

Midway through, she and her band, led by son Ernest Ray, openly disagreed on song selection. They attempted steering her towards Full Circle’s “Everything It Takes.” She wasn’t having it.

“Y’all better listen to me, or you’re gonna be playing for someone else next week!” she warned comically.

That meant the gospel-flavored “Everybody Wants to Go to Heaven.” Ray then brought out his sister Patsy Lynn, to “help you remember the words” to “Everything It Takes.”

“I wrote this damn song and I don’t know it!” lamented their mother.

Shaking off some initial elderly frogginess, the main attraction achieved ever more clarity as she progressed. The throng ate it up. Lynn knew it, and frowned upon SXSW time constraints as the band launched into its standard set closer, “Coal Miner’s Daughter.”

“They’re mean to me!” she exclaimed.