Now you see her, now you don’t

Commendable, what the sound guys did – setting up a full band for a headlining set by R&B singer/energy beam Erykah Badu that lasted all of 25 minutes. When technical issues happen early in a showcase, you end up with no time while trying to give the people what they want anyway. Such was the case at the House of Vans’ Wednesday night Mohawk shindig. 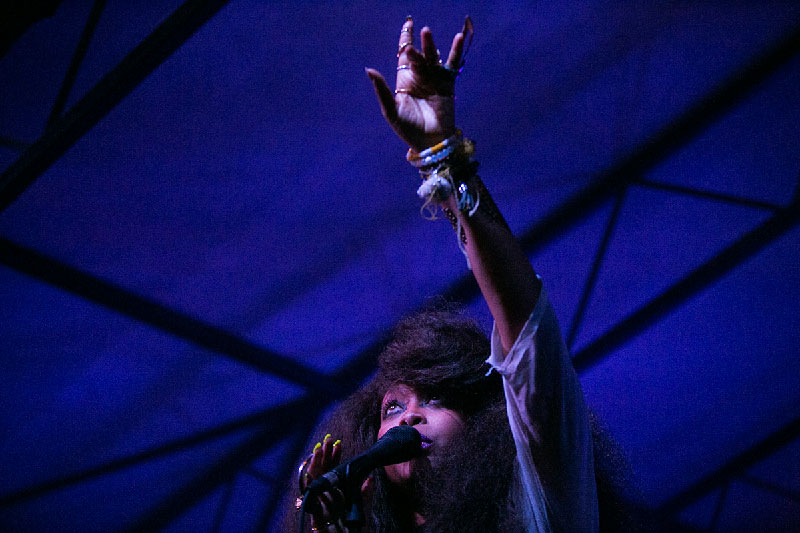 As a breeze gave chill to the night, the Dallas native strolled out with a thermos of tea in tow, blowing Afro preceding her. The band had been playing for 10 minutes prior, mostly Dilla-related jams like “Anti-American Graffiti,” from his singular Donuts LP.

She hustled from a shortened, yet towering take of “20 Feet Tall” into a jazz lounge rendition of “Out My Mind, Just In Time.” Classic call and response opportunity, “On and On” flips into something else entirely on the back end, where shades of Chaka Khan emerge. Badu paid tribute to Aaliyah via use of her last hit, the wavy “Rock the Boat,” which interpolated into “Love of My Life.”

Of course, all things must come to an end – very abrupt ends that include soliloquies about documentaries on Mexican occupation resistance. Actually, it was the tolling of Austin’s noise ordinance bell that brought the evening to a close. With a silent gong, much to Badu’s clear and vocalized perturbation, microphones, and input signals were cut one by one.

There goes Erykah Badu, like the brightest comets, passing through and leaving before you had a chance to comprehend what happened.