Another “Dan band” delivers at the post office via Samsung

Dan Auerbach looked every bit the neo-psychedelic warlord Friday night in his patterned button-up shirt, necklace of triangle medallions, and Vox teardrop guitar. More so, he also looked just plain small. The Black Keys frontman has come down from the stadium rock cloud to slouch amongst mortals on small stages. A side project will do that to you.

Plus, a corporate-sponsored gig during SXSW Interactive means that stage may be in the basement of a decommissioned post office and with a crowd distinguished by a type of cell phone they own rather than their taste in music. 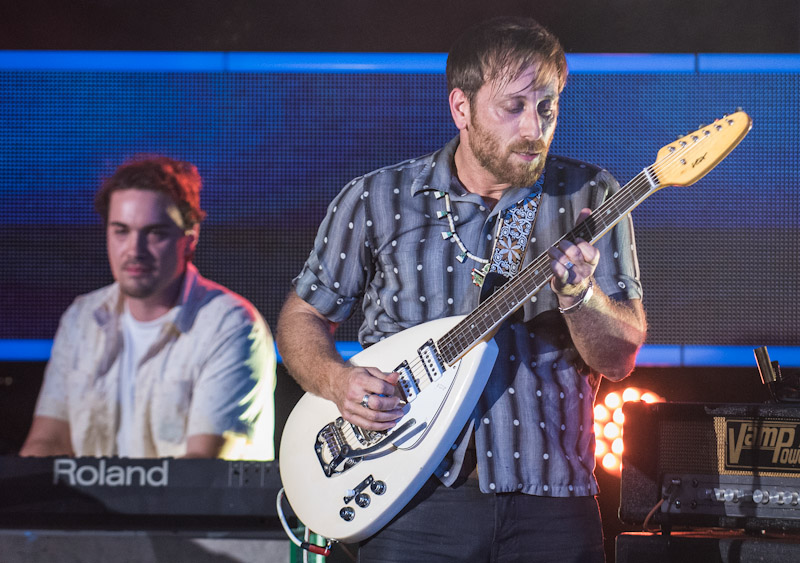 Thus, the setting and scene preceding the Arcs’ first Austin appearance – opening for the Strokes at the annual Samsung Galaxy Life event, held beneath the old post office on W. Sixth and Guadalupe – proved an ill-fitting vibe to Auerbach’s new project, made up of longtime collaborators and Black Keys backing musicians. Long lines led to a room with light-up floors, where videographers hovered and a DJ spun bizarre mash-ups (Papa Roach and sissy bounce?) while begging audience members to wave their phones in the air and Snapchat this or that.

That atmosphere melted away once Auerbach’s fivepiece took the stage with decidedly unflashy, workmanlike energy at 9:30pm. Worshipping the gods of reverb and vintage R&B, the 10-month-old project rallied behind its frontman’s bluesy moan and death-grip guitar, and stamped out a psych/soul sound bearing little resemblance to the blues-rock fuzz factory of the singer’s better-known band. Their tools: two drum kits, thump bass, an organ fit for Ray Manzarek, guitars, and vocals – the last two soaked in echo effects.

Letting out with “Stay in My Corner,” a cooing ode reminiscent of John Lennon’s “Jealous Guy,” the Arcs set the pace for the 50-minute set: slow and low. As the band demonstrated diversity with instrument exchanges, and burly drummer/multi-instrumentalist Richard Swift repeatedly threatened to steal the show with his falsetto, Auerbach remained the rock, singing from his gut and adding extracurricular guitar work and a dollop of garage to the tracks pulled from last fall’s Yours, Dreamily. As the set progressed, his guitar flare-ups became more and more a rallying point for some 300 in attendance. His voice, ever a second fiddle, eventually found glory with familiar closer “Out of My Mind,” the album’s charting single – found in local rotation on KUTX.

Even if Auerbach appeared half the rock star he’s become, his smile showed off a musician having twice the fun. And that’s it for “the new Dan band” at SXSW – no official showcase. After a mini-tour including a performance at Coachella, the Arcs return to Austin on April 29 for Levitation Fest – where his gaudy necklace and reverb pedals will fit right in.