Starting its second month today, Bowie Year continues proving – in wave after seismic wave (tune in to the Grammys Monday) – that while the Rock & Roll Hall of Fame singer’s influence never went undervalued, it also wasn’t fully understood until his death Jan. 10. One imprint occurred locally decades ago with a CD of homegrown acts upending the Star man. 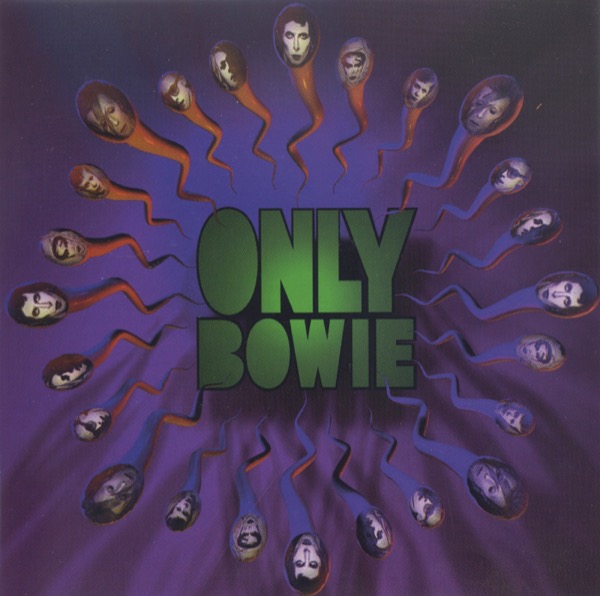 “Jeff Smith’s Only Boy Records presents here not just a cheap pun on its own name, but a testosterone-charged look (by mostly Austin bands) at a man who may have worn makeup and flaunted a feminine persona, but whose music nonetheless had no shortage of balls.”

So reads an excerpt from the Chronicle review of 1995’s Only Bowie, miraculously uncovered in our online archives. Although the paper dates back to 1981, our library only blips digitally that same year and remains hit-and-miss at best. Only Bowie was a “Bonus Track” review to a page of national tributes.

Equally remarkable, I managed to locate my copy of the CD. Lo and beholden, our punk (scribe) Tim Stegall wrote the liner notes, an affecting essay of the sort that will be shared again and again and again moving forward on our now post-Bowie planet. Where once everyone believed the Thin White Duke gave freaks permission to not only exist but thrive, it should now be obvious that Bowie, in fact, spoke to the outsider facet inherent to our entire species. 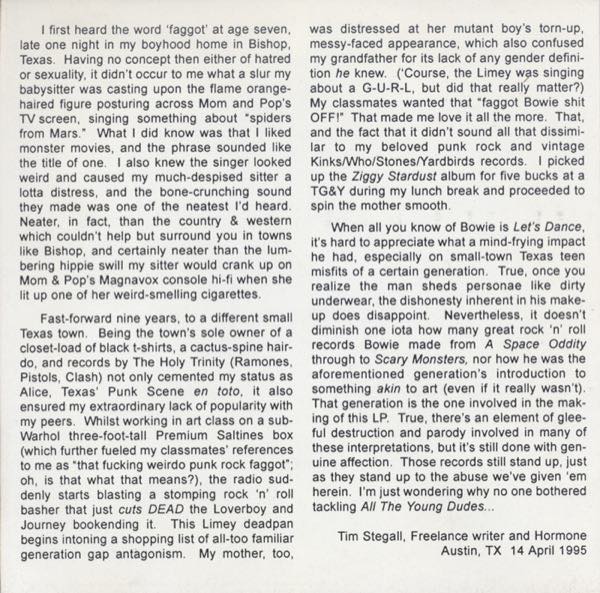 Pinged about his contributions to this Austin artifact, Stegall shot right back with the universal takeaway (“He was our license to be the misfits we are”), but also rightly refocused the conversation: The Music. His group the Hormones contributes one of Only Bowie’s best tracks, “John, I’m Only Dancing.” That’s high praise, because as our review points out, “There’s not a runt in the litter.”

“I’m proud of what we did with that track,” writes Stegall. “We were irreverent-but-loving, and made it sound like a Sex Pistols outtake!

“I made a rather crude video for that track and posted it on YouTube a few years back, mixing Hormones and Napalm Stars performance footage with the then-freshly discovered performance of ‘Jean Genie’ from Top of the Pops mixed in.”

The disc itself mirrors both the Hormones’ verve and their subject’s originality. Last year, Hickoids guitarist Davy Jones – a local hero beginning in the late Seventies – passed after a brutal bought with cancer, destroying those that knew him. Jones opens the chronological covers run of Only Bowie, an unlikely coincidence given that the musician being paid fealty was also named David Jones.

The Fuckemos’ deliciously half-speed codeine glower on “Fame” is worth its weight in sizzurp. 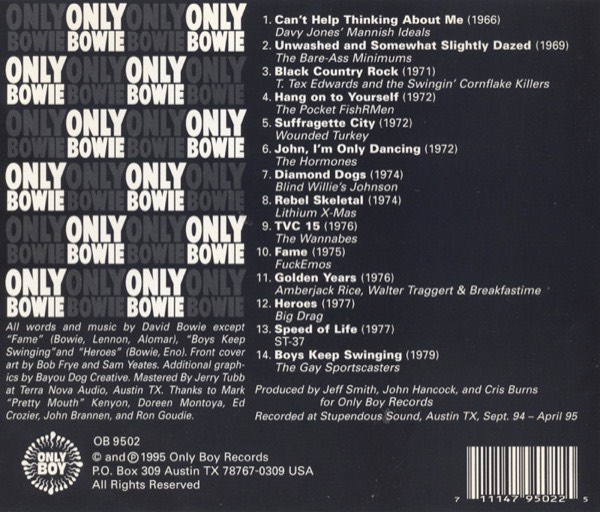 Though most of the acts have also passed, their principals still populate the scene, chief among them Hickoids ringleader Jeff Smith, who produced Only Bowie. Now living in his native San Antonio and running the ever lively and prolific Saustex Records, Smith’s sturm und drang hammers down on both the aforementioned track by Wounded Turkey (“That’s my Native American handle,” he writes) and the closing cut by his Gay Sportscasters, “Boys Keep Swinging.” The latter motors both Austin and Bowie past weird into super freak territory.

Better still, when contacted about Only Bowie, Smith had just discovered an entire box of them in his warehouse (“garage”). Informed of this flashback, he’s made the last remaining copies available for sale. More over, he created an audio sampler for it:

Smith shared a Bowie anecdote he posted on Facebook recently. Again, a license to freak is granted. Only Bowie remains that soundtrack:

“Hickoids and Loco Gringos were playing together in the fall of ’89 on the prophetically titled Fiasco Magnifico Tour. We were staying at Texacala Jones’ place in Hollywood. We’d all been partying pretty hard for about two and a half or three weeks by this time. Texacala had given me a pair of flared, sparkly purple spandex pants as I had left Texas in only jeans and shoes for a three-month tour, refusing to pack any clothes while drunk. I was wearing them without shirt or shoes, unshaven (and probably unbathed for several days).

“Tom ‘Pepe’ Foote, myself, and I believe one of the other Gringos had gone to the ‘Rock & Roll’ Ralph’s on Sunset Blvd. about 8am on a beer run. We’re trying to find the beer section and Pepe points over towards the check out line. In his best Abilene drawl, he says, ‘Look! It’s Dave Bowie!’ I’m like, ‘No way. You’re putting me on,’ but I glance over and it’s undoubtedly the man.

“So, I go up and awkwardly introduce myself, something like, ‘Hey, I’m Jeff. You and Iggy are my heroes.’ I didn’t want to blow hard on him and suddenly became very self-conscious about my appearance (for the first time in years) as he was dapper as usual in a white linen suit and $200 shirt. He was very cordial, asked us what we were doing, and, I think what band we were in and where we were from.

“Anyway, we skedaddle on off to find our case of generic beer (for real) to get the day rolling and are behind him in the checkout line. He’s buying wine and cheese with a model-looking type (not Iman) and they leave. We’re walking out the front of the grocery store and he rolls by in an expensive-ass-looking white European convertible and gives us a big wave and smile as if to say ‘Cheerio Boys!’”

Do Me Baby! Austin Does Prince
Only Bowie may have prompted era peer the following year