Vermont wailer strikes out on her own with firmly-rooted pop

Change is hard. Grace Potter knows now after disbanding the Nocturnals (b. 2002) to make her first solo album, Midnight. Saturday, the Vermont rocker with a platinum wail debuts her new act at the Moody Theater. 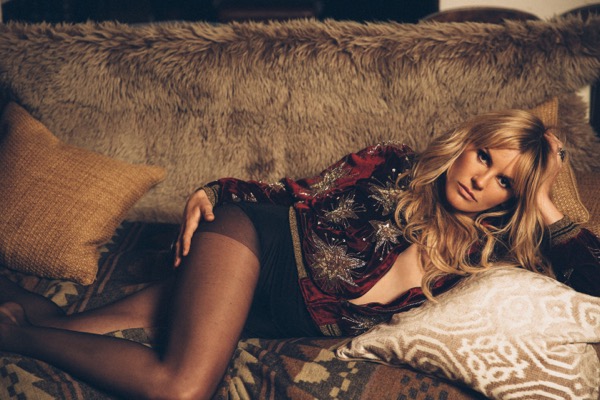 Austin Chronicle: How’s the tour been so far?

Grace Potter: It’s been amazing. It’s one of the most cathartic and visceral experiences of my life because I finally figured it out. I cracked the code and figured out why a show is what it is for me. I always thought it was the festival scene, or the energy and the crowd combined with a lot of drinking. But there’s a very specific connectivity I’ve been exploring with the audience. I mean the energy is insane. It’s really electrifying.

AC: This is the first time where it’s just you. It’s not Grace Potter & the Nocturnals.

GP: Yeah, and it took me a long time to adjust. Even the context of putting out a solo record, I thought, “Look, I’ve been doing solo stuff forever, with Kenny Chesney or Flaming Lips or Love for Levon or whoever as special guest vocals onstage or in a song,” but this is really me as a person and I’m not just accompanying somebody else. This is me doing my own thing.

At first, I had this feeling that it wasn’t going to be that big of a transition. It was just me stepping into the next realm. But things began to prove otherwise really quickly. Like I learned that fans especially are really sensitive to who’s in the band and what’s going on, and I created that atmosphere. I care about my band mates and I care about the Nocturnals, and I care about the legacy that I built.

So to suddenly not have that all be there, I didn’t know how that was going to feel until I actually did it. It was definitely not something you could predict. You had to be there.

AC: Were you nervous doing that?

GP: Well, at the end of it – toward the record coming out – it was more of a release than fear. The risk was mine, so I knew I was going to stick my neck out there and definitely be exposed at the jugular, so to speak. But I think at that point, it was a crazy record to make and was worth it.

At first, it started out at as a Nocturnals record, and over the course of a year and a half making it, things just shook loose from under me and I had to hold myself accountable for that and take responsibility. That’s why it was actually pretty easy by the time the record was coming out. It was pretty easy to recognize that, “I freaked out, the music sounds different, now I’m solo, and where the fuck did the band go?”

I’m actually okay with all of these things and I’m really excited to jump in with both feet, but the world is going to have a hard time catching up. So that definitely happened and it took a few months for people to actually wrap their heads around it. I enjoyed being controversial for the first time.

AC: I once read your favorite artists are Madonna and David Bowie. They certainly shook up their careers at most points.

GP: Yes, yes, and that’s important to me as a person too. When I was a little girl, one day I’d dress as a man and another I’d dress up as a ballerina. The next I’d be Rainbow Brite. I never wanted to settle into a look.

Fashion was always very important to me and still is because I was born legally blind. I had to wear glasses all the time. So when I learned that accessories were always going to be a part of my life, they just became a part of my character. I’ve always had this feeling that I have nine lives to live in this one life kind of thing, and I wound up in one of those lives way longer than I thought I would.

The Nocturnals were wonderful and they were my best friends, and it was a real, true family. And I thought music would be a perfect opportunity to hang out with my friends, tour everywhere, perform, and it would be so fun. It was the absolute best of times, and it’s great that those 13 years of that band happened for a little girl who thought she was going to live nine lives.

I feel like this whole year was a year where change was so palpable.

It was one of those years where everything felt like it was a volcano exploding from under you, but I feel like that tectonic shift is important in life. When you ask me about Bowie and Madonna, I think what those guys did throughout their lives was the catalyst for those tectonic shifts. Instead of being the majority and being the person having the rug pulled from you, those are the guys pulling the rug.

AC: Sex plays a huge part on Midnight, and obviously Madonna was a sex icon.

GP: In my life, I had the opportunity to be very open. I grew up with a very warm and wonderful hippie family. There were so many amazing teachers, friends, spiritual people, and artists. In the community I grew up in, sex wasn’t at all taboo. It wasn’t like, “Oh don’t do this, don’t do that.” It was a very open community, and I was very lucky because if I had any questions, feelings, or confusion, they would answer it. They would answer very honestly and be straight-forward.

I was also raised to never be ashamed of my body. I wasn’t raised to feel ashamed of those sexual questions you have when you’re young and confused. Like if I had a question of, “What do I do if I just don’t want to have clothes on,” they would answer along the lines of, “Well, first you probably should wear clothes, but if you don’t, then those people would be called nudists.”

Like in the rock & roll revolution, you would see Mick Jagger and Robert Plant wearing tight women’s clothing and playing up the androgyny. That became the entire next decade of hair metal. That femininity in a man and mixing that femininity onstage is incredible. It’s not only almost like an aphrodisiac, but it’s also visually an illusion that creates all these fireworks in your brain that makes you listen harder and pay closer attention.

That, to me, is very powerful. At the end of the day, we are all sexual creatures and I think music is one of those beautiful visceral experiences that is based around the beat in a very sexual way.

AC: Is that why you had strippers in the studio once?

GP: [Laughs] So I was in the studio a few weeks ago with Mark Batson, who produced our self-titled album in 2010. He was actually having a hard time inspiring us in the studio. We were trying to write a part of a song, but it had no juice. We kept playing it, but it wasn’t exciting enough and we kept asking him, “Is that it?” and he was like, “No.”

So he picks up the phone and starts calling people, and suddenly there was a bunch of beautiful women in the studio. They may or may not have actually been women, and it went great. Like there was this one belly dancer who started doing these moves in the studio while we were playing. She had a box over to the side in the corner, and I was thinking, “Okay, cool. She’s probably going to do something with it.”

Midway through her performance, she goes to the box, opens it, and then pulls out a 12-foot snake. It was probably one of those albino boas and it was beautiful performance. I can’t take full credit for [how the song turned out], because it was facilitated by Mark Batson. It was awesome.

AC: Your new album’s very pop. It’s definitely not the British Invasion sound of the Nocturnals.

GP: I think again it comes from my influences that hadn’t quite had an opportunity to leap out of the landscape of the Nocturnals’ sound. It was always in there, it just needed to take fruition. It’s not like I suddenly turned on the radio and wanted to make a pop record or anything. I don’t want to take part of the radio or even understand it. Music is so beautiful that we don’t have to choose a certain style. Like with my life, and my fashion, I don’t want to choose.

I had a real epiphany. My mom used to make me these amazing mixtapes when I would go out to summer camp. And really, what they were there for was to inspire me to want to clean the house, because she needed me to do chores, but she wanted to make it fun. On the mixtapes, she would put the Talking Heads, Al Green, Donna Summer and just wonderful, vivacious, and empowering bands. They were all some of my favorite artists growing up.

Like I was born in ’83, so when I was 4, I practically knew every word to every song that Annie Lennox sang and I would sing all the harmonies. Not only her, but Michael Jackson, the B-52’s – really pop-based music. Yet I feel that really didn’t have any room in the Nocturnals. The Nocturnals was a band that was created on a style of music that I love and feel devoted to being rock & roller.

AC: Even in a poppier mode, you’re still very lively onstage – just as you were with the Nocturnals.

GP: That brings it right back to the beginning of our conversation, right? Bottom line, I really don’t know how it happens and it’s so strange. Part of it is that I feel it’s not really about me when I’m performing. It’s always about the visceral reaction between the audience and the performer. I live for that.