“We gave ourselves space,” proclaims Paul Waclawsky, tracing Casual Strangers’ palpable evolution from experimental rockers to ambient instrumentalists. “Space from each other, from a recording studio, from the instruments we normally play in our live show.” The Strangers’ second movement, a rose-colored cassette called Pink Panther, forgoes the skin-melting psychedelia and cheeky art-rock lyrics of the quartet’s eponymous 2014 debut in favor of meandering synth compositions and uncharted atmospheric jams. Credit the methodology: The bulk of the album resulted from analog home recording experiments in which tracks were constructed via round-robin improvisation on unusual instruments like a Farfisa synthesizer and 12-string guitar.

“It was like a game of telephone,” offers Waclawsky of Pink Panther’s minimalist rhapsodies. “This is what I hear, and this is what I put on the track.”

Another thread on the album draws from live sessions in which the entire band – Boxing Lesson alumni Waclawsky (guitars), Jaylinn Davidson (synths), and Jake Mitchell (percussion), plus ringer Katey Gunn (lap steel, synths) – embarks in off-the-cuff musical voyages in their loud, live band setup. Lead single “Holocene Dream,” the soundtrack to this oceanic color-trip video, draws from those recordings. Pink Panther, named after a potent formula of LSD, takes an instrumental spirit quest, and like all trips, the feeling lingers and informs everything thereafter.

“Perhaps this has been a detour so extreme it’s become a new direction,” allows Gunn. “We hope to incorporate this relaxed sound into our future projects.” 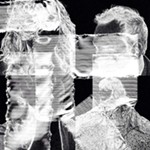 Casual Strangers Administer Turing Test
Who or what created the universe – woman, robot, or God?