Alejandro Escovedo on a Wire

Catching a beloved rock & roller fresh from his mother’s memorial service does’t exactly constitute good timing, but in inimitable fashion, Alejandro Escovedo proved warm and gracious – gentlemanly. Now an Austin expatriate, he was also prepping his annual birthday show at the Moody Theater on Saturday, this one conceived as a tribute to Leonard Cohen. 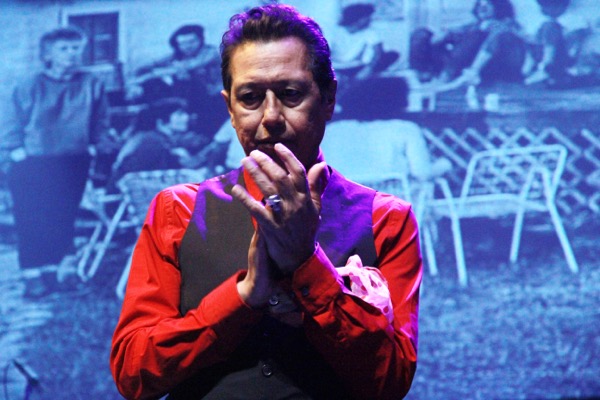 Alejandro Escovedo at the Moody Theater in 2013 for his epic history of Austin music birthday concert. (Photo by Todd V. Wolfson)

Austin Chronicle: My condolences on the loss of your mother on Dec. 12. How old was she?

Alejandro Escovedo: Ninety-four, Cleo Evita Escovedo. She was a very interesting woman. She worked at the Pentagon during the war. She was a secretary to the Chief of Staff. She went there from San Marcos, Texas.

AC: You yourself recently relocated. This will be your first ACL Moody show as an ex-Austin resident.

AE: I’ve been living in Dallas for two or three months now. We still have a place in Austin, but we’re really looking to relocate somewhere. We’re not sure. We’ve got so much family here, it’s hard to leave the state.

But Austin has become, as we all know. ... I wrote a song about it: “Austin's changed, it’s true/ Please show me what happened.” That’s the first line of the song, called “The Bottom of the World.”

A lot of things have happened, some of it personal. There’s a lot of strong memories there, good and bad, a lot of great support there over the years. I thought of Austin as a place I would always land softly. I didn’t think I’d ever leave. And then, a lot of things changed after the hurricane. My life changed, my needs changed. Everything kinda scaled down. I don’t have a band anymore, really. I play with different musicians, I do duets, solo stuff.

Everything was changing: My daughter had a baby. She’s been staying at the house in Austin, but she’s getting ready to live out in Lakewood. The kids have gotten older, obviously. They’re on their own, and I don’t see them as often. I’m always up for adventure, always have been. We still love Baja, always will. We just won’t go there August/September/October [laughs].

But, I dunno. My wife, Nancy, got a job on a movie up here, and we decided we’d live here. Through the generosity of some really beautiful people, we’re at the Belmont Hotel in Oak Cliff. Do you know Savannah Welch? She’s Kevin Welch’s daughter. Her husband, Jeff, is a hotelier, so we have this beautiful apartment at the Belmont. We’ve been living here, and it’s so amazing. They’ve treated us so well. Been very kind and generous to us, and we feel very much at home.

The move is a kind of multifaceted decision. There’s a lot of factors that play into it. Where we end up is still up in the air. We had an opportunity to get another apartment in Austin in a very beautiful spot Downtown, down by all of our favorite things. But then we’d dive right back into the belly of the beast again. I’m not so sure that’s where we wanna go. We’re really playing it by ear right now, working our way through this next chapter.

AC: Do you still consider yourself an Austin artist?

AE: Well, sure. I could. I could consider myself a Dallas artist. I used to be a New York artist, a San Francisco artist, a Hollywood artist.

AE: Well, it’s Church on Monday with Mitch Watkins on guitar, who played with Leonard Cohen the last few years, I believe. Then we got John Giddngs on keyboards, Elias Hanslanger on tenor sax, Daniel Durham on upright bass, and Scott Laningham on drums. Then we have Julie Christensen and Carla Van Duren singing backup. We have a nine-piece, all-female choir, ranging in ages from 5 to 16, I think. Then we have two cellists, Matt Fish and Brian Standefer.

The show is called “A Thousand Kisses Deep: The Influence of Leonard Cohen.” It’s a combination of songs sung by myself and Julie, songs that are mine, songs that are hers that have been influenced by Leonard. Then I’d say we have about 10 or 15 Leonard songs we’re doing. We also have Robert Patrick, the actor, coming in to read some of Leonard’s poetry. And Rafael Childress, the actor, reading a piece of a play I wrote called By the Hand of the Father.

AE: I love Leonard Cohen. That’s kind of a silly question, in my opinion. I know other people have done it before, but this is not just a full-on tribute. This is more about the effect that he had as a writer, as a man of poetry and novels, and as an award-winning poet in Canada. He never dreamed of becoming a pop singer.

That’s what I think he has brought more than anyone. I can’t think of anyone who has done what he’s done. What’s so attractive for me is his romanticism, his sensuality. And obviously his poetry and his stance, and his style. It’s just a very unique kinda presentation. No one else does that.

AC: Ever met him?

AC: Definitely an Austin connection there.

AE: Part of it, too, was that Leonard’s band in the Eighties had been a band called Passenger, a kind of jazz fusion band from Austin that he met and picked up. That’s where Roscoe hooked up with him. And Billy Ginn, who played piano on my first solo album, was also Leonard’s musical director back in those days.

So, we have a really strong connection to Leonard and Austin right there. And Julie too, of course. She and I go back to Divine Horsemen and Slash Records, all that stuff.