Guitarist starts at Jimmy Reed and ends up in New Orleans

Native Austinite Eve Monsees, 32, relishes running Antone’s Record Shop. “I used to go there when I was first starting to play. I learned so much just by setting foot in the door, and it really is an honor to keep it going.” The co-owner and her band squeeze in among the racks Sunday, 3pm, to promote their new disc, You Know She Did.

The new disc arcs from Chess Records to Third Man Records, so who better to ask for a blues lesson than Monsees? She says begin in the city where the former imprint flourished – Chicago.

“The place to start is with Muddy Waters and Howlin’ Wolf on Chess, and Jimmy Reed on VeeJay. 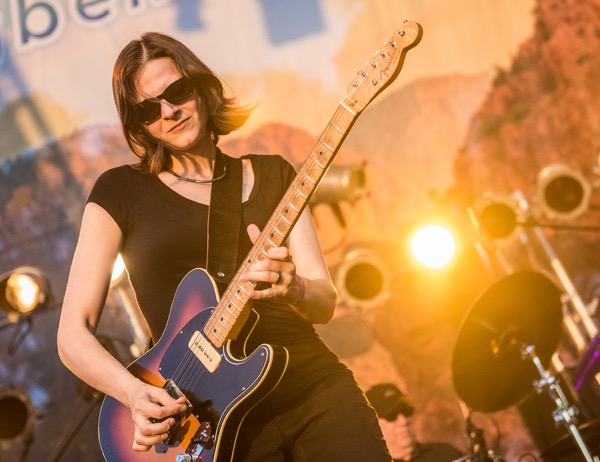 Eve Monsees onstage this summer in Zilker Park for KGSR’s Blues on the Green and the Antone’s 40th Anniversary. (Photo by David Brendan Hall)

“I remember Clifford Antone saying Bobby Blue Bland’s Two Steps From the Blues was the greatest album ever, and it’s pretty hard to argue with that. Every song is great and even the cover art is iconic.

“Going back before YouTube and the Internet, you can really tell a difference. All of the blues cities – Chicago, New York, Detroit, Kansas City, and the Mississippi Delta – had a unique sound they developed. There’s still some of that, but because everything is so accessible now, you don’t see it as much.”

Magic Sam remains her first blues idol, someone the guitarist wishes she could have jammed with. She explains that blues is secular. It’s all about a feeling.

“More about emotion than sorrow,” she says. “Sometimes it’s sorrow, but I don’t think it’s exclusive to that. The blues is a universal language. You can get up and play with people you’ve never even met. You’re able to share this music together and this feeling.”

These days her favorite guitar to play is a Telecaster. She loves it so much she now ponders why it took her so long to own one. She bends strings on a Silvertone “that’s tuned open and sounds pretty wicked.”

Over the years, her style’s changed.

“When I was first playing the blues, Gary Clark Jr. and I would study that stuff, and I’m glad it gave us both a solid foundation. I love blues, but there’s so much else out there, and I’ve tried to incorporate that in what I do now. Playing with the Bluebonnets and the LeRoi Brothers has certainly helped.

“Both of those bands are pure rock & roll, and they’ve given me a good kick in the ass. I’ve been fortunate to get to play with a lot of great people over the years, and I’ve learned so much from that. It’s made me a better player and more versatile.”

If she could time travel, Monsees would go see all of the music she prizes from the Fifties and Sixties live and in person. Maybe jump onstage with Buddy Holly & the Crickets. She reminisces about being in high school with Gary Clark Jr. and the true source of their education.

“We’d go to Antone’s to see people like Jimmie Vaughan, Denny Freeman, and Derek O’Brien. We looked up to those guys so much. They’re great players, but also so good at backing up other people.

“Now being asked to play that same role as a house guitar player for various artists is a huge honor,” she continues. “Mike [Buck, her husband and another Antone’s co-owner] and I just played in New Orleans last month as one of the house bands for the Ponderosa Stomp. We backed up Billy Boy Arnold, P.F. Sloan, Augie Meyers, Lenny Kaye, and Roy Head.

“I’m proud to be asked to play with people I look up to.”