”In the spirit of experimentation, I did a whole bunch of DMT earlier this year – around 35 times over eight weeks,” explains Devin James Fry over the buzz of a grinder perched on his truck’s tailgate as he carefully sharpens a cleaver.

The mystical-minded singer moonlights as a mobile knife sharpener and today he’s servicing the cutlery of an upscale Eastside eatery while recalling the psychedelic explorations that inspired his heady new single, “I Touch My Face in Hyperspace Oh Yeah.”

“I wanted to see what it was like to have a really immersed experience. So one night I did it, then did it again, then I did it again. I came out with a notebook full of phrases, lines, and half-sentences,” he outlines.

DMT is a hallucinogenic compound that, when smoked, evokes a short burst of strong visuals and a mental state that can only be described as “consciousness upheaval.”

“As soon as I could open my eyes, I’d write so it proceeded automatically from that place,” continues Fry. “I wrote it while I was there and organized later. That’s the song. It came out pretty descriptive of the experience.”

He pulls a long kitchen knife away from the grinder and inspects his work. Perfect. Fry ceased his DMT journeys shortly after writing the song, but maintains that the particular night of heavy experimentation yielded experiential virtues.

“It’s like seeing the source code of the universe: a river of vibrating mandalas, geometric shapes shifting and moving. That night I became it. There wasn’t a separation anymore – I was part of that. I was certain that consciousness is a non-local event.

“It’s more like we’re antennas beaming something in for the duration of our time in these bodies. I remember being so certain of that, but the farther you get away from that – it’s almost like waking up. Was that really true?

“You start to doubt it or disbelieve it.”

In the moment, that sense of existential illumination often compels the subject to touch their face just to confirm they still have a body. Hence the song’s titular line, which is delivered in surging baritone incantations over down-tuned acoustic guitar and tumbling rhythms. Filmmaker and animator David Nast Cole approached Fry about making a video to accompany the track, but like documenting a dream, recreating the reality-shattering visuals of DMT journeys proved a challenge.

“You can’t recreate that world, not with our budget – which was essentially nothing,” allows Fry. “So we tried to come up with visuals that gestured in that direction: a honeycomb represents the mind-blowing shapes and the three creatures. They’re like the spirits you meet in the DMT space.”

“I Touch My Face in Hyperspace Oh Yeah,” is available on Devin James Fry & the Name Sayers’ recent EP Four Dreams. Fry, former leader of gothic desert rockers Salesman, now fronts an eponymous trio that can be seen Nov. 30 at Stay Gold, and loud quartet the Name Sayers, who appear at the Hole in the Wall on Dec. 3. 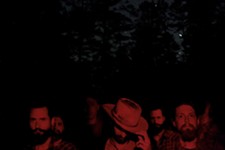 Fishing With the Heron King
Name Sayers take us to river