As the third-to-last booking and final rock show before its demise, the Austin Music Hall couldn’t have asked for a better epitaph than this Southern metal trifecta. The building’s sound skullduggery also put its looming demolition into stark relief. Once kings of Eighties punk/metal crossover, North Carolina’s Corrosion of Conformity – including frontman Pepper Keenan after a long absence – arrived in familiar guise: perpetually stuck on the undercard but delivering the goods. Newly signed to Nuclear Blast, the re-energized quartet slammed into opener “Heaven’s Not Overflowing,” bassist Mike Dean attacking his bass with happy ferocity, guitarist Woody Weatherman grinning maniacally, and Keenan’s burly rumble having lost nothing from disuse while serving in Down. The full house’s top-volume accompaniment to closing trio “Vote With a Bullet,” “Albatross,” and “Clean My Wounds” ended with everyone chanting “COC! COC!” Once upon a time, Clutch singer Neil Fallon scowled and barely moved. Now he waves his arms like a crazed choir director and barks his distinctive lyrics with barely contained mania. The Maryland vets blasted the title track of their Austin-recorded new LP, Psychic Warfare, an instant classic of roiling riffs, charged swing, and batshit libretto. From newies “Firebirds” and “A Quick Death in Texas” to standards “Crucial Velocity” and “Texan Book of the Dead” (guest-starring Mastodon’s Bill Kelliher), Clutch never downshifted.

Guitarist Tim Sult also never lifted his gaze from his fretboard, and bassist Dan Maines held down the bottom with little fanfare. That left Fallon and nimble groove-monster Jean Paul Gaster to rivet the audience’s gaze. By the time Clutch ended with the one-two punch of “Noble Savage” and “The Wolfman Kindly Requests…,” headliners Mastodon had their work cut out for them. Enjoying a new career peak thanks to the Top 10 success of 2014’s Once More ‘Round the Sun, Mastodon upped the ante on its second Austin show in a year with lasers, a smart set list, and the zest of musicians that know their material inside out and still enjoy playing it. Leading with Sun opener “Tread Lightly,” the Atlanta quartet cannonaded recent hits “High Road” and “The Motherload,” plus fan favorites “Oblivion” and “Crystal Skull.” Delving heavier roots, the band reached back to its masterpiece Leviathan for a thrashing “Aqua Dementia” and titanic “Blood and Thunder,” Clutch’s Neil Fallon reprising his vocal cameo from the LP.

Unfortunately, the Music Hall’s notoriously bad acoustics messed with Mastodon’s set. Hard. While Clutch and COC relied on brute force to power through, Mastodon’s intricate arrangements and knotty lyrics require sonic delicacy to fully appreciate, a clarity denied by the mud poured all over the sound. 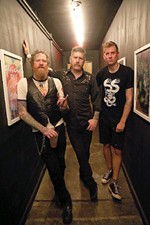