They recently celebrated 27 years of marriage. He spent eight years touring with Bob Dylan. She’s sung with Emmylou Harris and Bonnie Bramlett. Together, they’ve been members of Little Feat, Hot Tuna, and Phil Lest & Friends. Most famously, they were members of the Levon Helm Band, working with the onetime Band drummer and singer until his death in 2012. 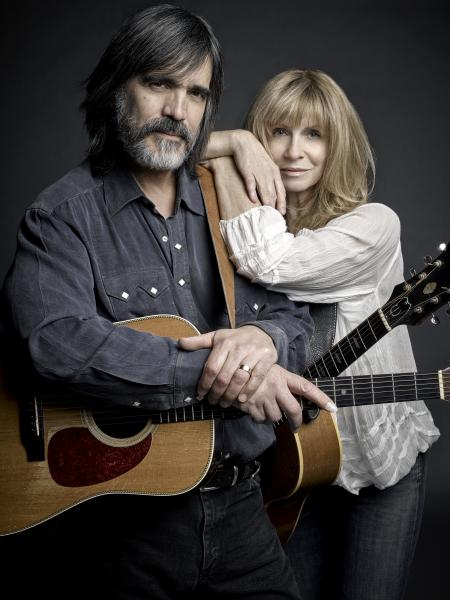 Now, Larry Campbell and Teresa Williams are out on the road with Jackson Browne. They serve as both the acclaimed SoCal troubadour’s opening act and as members of his band. Browne appears locally tonight at Bass Concert Hall.

Earlier this year, Campbell and Williams released a self-titled duo album. Given their musical pedigree, it’s filled with a rangy brand of folk and roots music. Original compositions nestle alongside well-chosen covers from the Rev. Gary Davis, Grateful Dead, and Louvin Brothers.

“I was never really drawn to center stage,” says Campbell. “I just wanted to be the guitar player, the musician, or the guy in the studio. After eight years on the road with Bob Dylan and eight years of Teresa doing her own thing, we hooked up with Levon. That’s where we organically started doing our duo thing.

“It was kind of self-protection,” Williams chimes in. “The pressure wasn’t only on him.”

“It was the ideal musical situation for all of us,” Campbell continues. “Everything was being done for the right reason and with the right amount of enthusiasm. This also led to all sorts of opportunities: Phil Lesh, Hot Tuna, Little Feat. They were bands that we respected.

Toward the end of his life, Helm’s legacy became the Midnight Rambles held on Saturdays at his studio in Woodstock. Campbell and Williams met Browne at one such event. When the latter was assembling a band for this tour, he approached Campbell to see if he was interested.

The guitarist explained he was part of a duo now.

“[Browne] called the next day with the idea that we open the show, then I play in his band and Teresa could come out and sing some songs with him,” says Campbell with a chuckle. “My reaction was, ’Wait a minute. What’s wrong with this?’”

“He sent us some Christmas cookies and then he called,” adds Williams. “He did a Ramble. That’s how I first met him. He really saw the heart of what was going on there and loved that.”

To this day, local musicians Carolyn Wonderland and Shelley King talk about their participation in a Ramble. They say it changed their perspective on making music.

“The Ramble was the most soul satisfying thing you could do as a musician,” affirms Campbell.

There’s a bittersweet version of the Dead’s “Attics of My Life” that closes out the couple’s new disc. Consider it something of a companion piece to Helm’s recording of the Robert Hunter/Jerry Garcia ode “Tennessee Jed” that opened his last album, 2009’s Electric Dirt.

“We’ve worked with [dead bassist] Phil [Lesh] a lot,” Williams explains. “He’s almost like family. We toured with him quite a bit and we go out to his place in California, Terrapin Crossroads, and perform. He sang ‘Attics’ with us at Larry’s mother’s memorial.

“We would do did it with Amy [Helm, Levon’s daughter] at the Ramble and Levon loved it. He loved that kind of cross pollination.”