Choosing happiness – even when going out of business

Trailer Space clears out on October 31 to make room for an East Side Pies expansion. With its exit, Austin loses a unique asset: an all-in-one record store, music venue, and clubhouse.

Last Thursday, as he prepared to enter a new chapter in his life, Trailer Space owner Spot Long obliged in an exit interview. He discussed the history, booking methods, and philosophy behind his “personality-driven” business, and pondered his next move. Spot Long: We were on Cesar Chavez for 10 months, but I never got around some city ordinances. Parking variance was ultimately the undoing of it. I threw a party for Gerard [Cosloy, Matador Records co-owner and the man behind local imprint 12XU Records] on New Year’s and got a zoning warning. So I moved, but I never took the sign down because it took three ladders – the really tall ones.

So I left it and it became free advertising. We never opened there officially. I threw a party, I did a lot of work. It was an adventure and probably a little ahead of its time in some ways to open a 7,000-square-foot event center on the Eastside and have shows there. Chalk it up to being like that Tesla fella. I’m just like Tesla.

AC: When did Trailer Space open on Rosewood?

SL: We opened in 2008. I signed the lease in fall 2007 and opened the next South by Southwest. Fucked Up played the first show. It was put on by Timmy Hefner.

SL: It’s always been the same. When we opened, I didn’t have any money for advertising and I’m a strong personality not everyone enjoys. I thought a good way to get people I didn’t know here was to get bands I didn’t know to play here.

During the course of that, I slowly realized how important the clubhouse part of the shop was – the inclusive aspect that I’ve always wanted. I’ve spent my whole life around people who are supposed to be cool and they’re usually not as cool as they could or should be. But if you give everyone a chance to be cool, then most people will be cool. Just like most people are good inside if you give them a chance to be. And that’s all this place is – a place for people to feel like they can belong.

Everyone wants to be Norm, but not everyone can be Norm. You’re lucky to be Cliff in reality. I’m talking about Cheers.

AC: But Norm was the fat drunk guy.

SL: But everyone says “Hey Norm!” when he walks in. No one’s that excited to be Cliff. He’s just the postman. You see what I’m getting at?

AC: Wouldn’t everyone rather be Sam, Ted Danson’s character?

SL: You’re missing the larger picture here. He works there. You can’t be him.

With the band thing, it’s like open mic night. You just have to call and give us the band names. You go to the website and see what dates are open, and you call and ask to play. Where else are these kids gonna play now? [He motions to a band setting up in the store to almost no crowd.] Where else are these dorks from Houston gonna get a show in Austin?

AC: Does that mean there will be less entry points for new bands to start playing live once Trailer Space closes?

SL: You’d have to ask someone else that question.

AC: Did you try to fill that role as a venue?

SL: No, not intentionally. I mostly opened it, like everything in my life, as a vehicle for my own pleasure. If anyone gets mad at me, they’re not paying attention. It’s all about my fun. I’m not malicious, but I am very mischievous. Over time I saw how important it was. I watch a lot of bands every night. I don’t hate them. They’re totally cool when they play, but when they load in and tune up I hate them.

SL: Cheater Slicks. They've played here a few times. I’m proud of so many bands playing here. A lot of them are my friends. I’ve always believed that the best music comes from someone you know. I don’t play in bands, so it’s interesting to me. When I worked at Waterloo Records, people would ask about a record and I’d say, “Oh yeah, they’re local. They work right over here.” As soon as you say “local,” the customer would either get excited or set it back down, like, “You’re not a big rock star, you have a job, you’re a real person.”

I get that, but I’ve always thought everyone’s the same. People can say what they want, but everyone gets treated exactly the same here.

AC: And how is that?

AC: I’d say I’ve never been bored by the customer service at Trailer Space. How many shows do you try to have every week?

SL: Four or five. I never call anyone to play. They call us. Look at these kids over here [points to a group of young kids sitting outside]. They all go to high school at McCallum. They were here the night the stabbing happened. Or what about bands like the Grundles, who’ve played here a lot for like three years? Where are they gonna play? Some of them might have fake IDs, but there aren’t many all-ages places in Austin.

AC: When did you find out that East Side Pies was expanding into your building?

SL: They always wanted to. When I moved in, they had made an offer to Gene [Mays, the landlord] and he scoffed at them and rented it out to me because it pissed them off. So they’ve always wanted to have pizza in here. That’s great. That’s their dream.

And Gene, he’s been great to me. He’s selling his place and he’s getting paid and that’s awesome. It’s always been a handshake deal. When I was in a tough situation, he paid me to work at his bar for a few months.

SL: Yeah. Gene’s a solid fucking dude. He’s an old school dude who believes that a deal is a deal. When Gene sold the property to East Side Pies, he gave me an extension ’til next May. Then I realized that maybe I’m a little tired – weary perhaps. I’ve been doing this every day for eight or nine years.

AC: What is the last day for Trailer Space?

SL: The end of the month, the 31st. I’m going to close early to trick-or-treat with my kids.

AC: Is there going to be a closing sale?

SL: No man, those fuckers never bought anything from me anyway. They can pay the same price. But my records are cheap. Anyway, we’re a personality-driven business.

AC: Is Trailer Space booked for the rest of the month?

SL: Yeah. We had to cancel some future shows. Not all of them have officially found out. They’ll find out when you put out this article. I think two weeks is about how long I can take of people telling me how cool we are and how much they love this place.

AC: What will Spot be doing with his life after this?

SL: I don’t know. I haven’t thought about that too much.

AC: How old are you?

AC: How come you look so young?

SL: I don’t beat myself up for who I am. Choosing happiness, that’s the hardest thing to do in the world, because everyone will tell you you’re wrong. How the fuck would they know?

SL: My wife says I’m extremely employable, but not hireable. I don’t know what that means. Trailer Space was never about the money. I’m rich in so many ways beyond cash. I have street cred. If you get two free beers and an appetizer and a movie, that’s pretty good, but that’s all you get with street cred.

I’m rich beyond belief in life. Trailer Space isn’t about money. Maybe it should have been. I’m not gonna struggle to keep it open just to close it. I decided not to do that. I lost that eye of the tiger, so to speak, but I had a lot of fun and I’m going out on my own terms. To me, that’s success. I’m not going to make that much more money keeping it open for a half a year.

I might be okay not doing anything but playing ball with the kid. Then again, I chose this. It’s my choice. We probably would have closed a year ago had J.J. [Ruiz] not put money into it.

AC: Who are the people who’ve been essential to Trailer Space’s survival?

SL: J.J., Nay Nay from the Golden Boys, Graham from A Giant Dog, Evan Hendrix from a bunch of bands, Ish from Coma in Algiers, Phillip Sambol, Carlos “Mex-Mode.” All those people have worked for free because they believed in the shop or they love me, or whatever. Maybe both.

That’s another aspect of being rich in life. 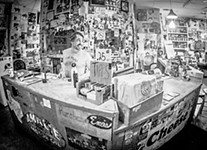 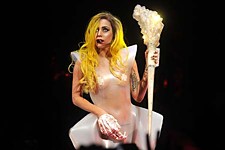