Ohio pop foursome Walk the Moon is just the right blend of a boy band and cult. Their set, or dance party, vigorously awakened the afternoon drag of the immense crowd at the Miller Lite stage. The diverse group of all ages knew where to find a good time. 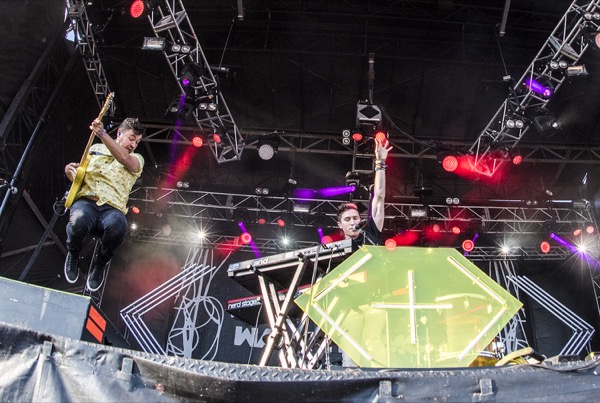 From Sean Waugaman’s neon orange drumsticks to singer Nicholas Petricca’s red mohawk and Ziggy Stardust-like face paint, everything onstage vibrated. The intense energy of the group extended beyond the stage, and it never reeled back in during the hourlong set. Even when the foursome showed a hint of slowing down during “Portugal,” a ballad about life and loss, the mass of sweaty bodies bounced along, falling prey to their charm.

Walk the Moon landed a Top 10 hit in the contagious “Shut Up and Dance,” but the crowd seemed to be stalking the band itself – not just the chart-toppers. Despite a few sound issues with the vocals and a keyboard malfunction in the middle of the set, there wasn’t a stagnant person in sight. They sang along to every word of every song, hit or not.

Confined behind a keyboard most of the time, Petricca never stopped marching in place or swaying his hips. Guitarist Eli Maiman rarely took his eyes off the crowd, singing and connecting with them in a way that made the wait in the sweltering heat worth it. Overall, the magnetism of the performance and exquisite harmonies made for an experience unmatched anywhere else at ACL Fest.