Is This It, new again perennially

Julian Casablancas still sports the same home-barbered shag as the days his New Yorkers’ 2001 bow Is This It burned up radio, opening playlists and programmers to garage-punk-influenced hipster music. In fact, on Sunday at ACL (weekend one only), the Strokes came off perfectly preserved in that moment they strutted across the Lower East Side like kings. 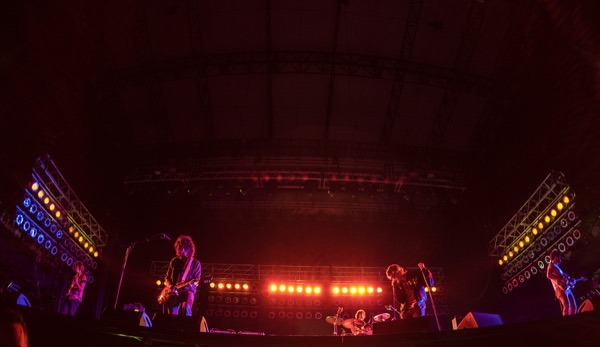 Hard to believe a decade-and-a-half has passed. The Strokes are now all in their 30s, have pursued solo projects and individual tangents, then regrouped refreshed. Newer material still resembles that we’re-almost-Television manner they seemingly patented.

Some prog influences have crept in, as can happen in punk bands whose musicianship improves over time. If the audience responded with less warmth to newer songs, it was mostly due to unfamiliarity. The new material fit in with the old.

The throngs gathered before the Samsung Galaxy stage at the close of Sunday, for the most part, were likely in middle school when Is This It was released. Hence, the Strokes wisely concentrated on their earliest sound. Grimy New Wave bouncers “Someday” and “Last Night” rocked as hard as ever.