Nostalgia, sure, but evolution as well

As the Decemberists ease midway into a second decade, the question is whether the Portland, Ore., troupe has a second act or are banking on nostalgia to carry their offbeat pop. The latter held true at ACL Fest on Sunday, but the focus on and popularity of this year’s What a Terrible World, What a Beautiful World suggested a rising contemporary appeal. 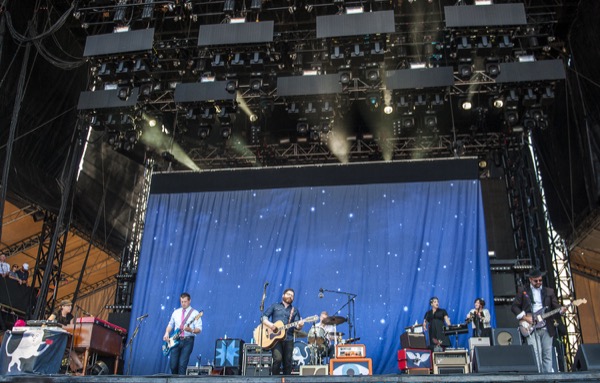 Opening aptly with “A Beginning Song,” Colin Meloy strumming amid a wash of feedback, and the horn-blasted “Calvary Captain,” the quintet (plus a pair of backup singers including longtime Neko Case backer Kelly Hogan) asserted new material before the cheerfully apocalyptic “Calamity Song” from 2011’s The King is Dead. “Anti-Summersong” returned to Beautiful World with banjo licks, while “Why Would I Now?” pulled from upcoming EP Florasongs, Meloy winding through characteristically literate lyrics in easy pop melodies.

“Make You Better” brought an instant roar of recognition usually reserved for older material, but only after Meloy turned solo for the Appalachian-inflected “Carolina Low” did the band reach deeper into their extensive catalog. “The Rake’s Song,” driven by a percussion pummel with a full four members drumming, and “Down by the Water” set up the anthemic “O Valencia!” from The Crane Wife.

By the band’s close, a 10-minute “The Mariner’s Revenge Song,” the west side of Zilker Park bloomed to full participation. The Decemberists proved they’re still moving forward while preserving their original theatricality.

Long Live the King!
The Decemberists' Nate Query talks about their new CD