The elder statesman of Americana makes a comeback

Thursday night’s Austin City Limits taping with James Taylor was as surprise-filled as any I’ve ever witnessed. He concentrated on tunes from his first collection of new material in 13 years, Before This World, but those songs fit snugly next to his better-known hits. They’re as varied in tempo and style as any in his repertoire. 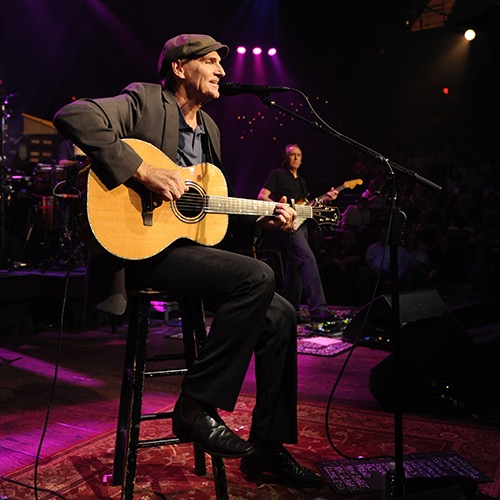 His intent was to please fans no matter what era of Taylor they favored: serene singer-songwriter, a composer remaking pop hits, or elder statesman of Americana. While appearing ageless, the 67-year-old singer’s vocal delivery, onstage demeanor, and the way he led a star-filled 11-piece band was all enacted with the loose yet exacting manner of an old pro.

New songs highlighted Taylor’s ability to capture moments with utmost gravity and smooth melodies. The acoustic country of “Today Today Today,” about getting signed to the Beatles’ Apple Records in 1968, featured Nashville stalwart Andrea Zonn on fiddle. “Angels Of Fenway” described his range of emotions when the Red Sox finally won the World Series to break “the curse of the Bambino, Babe Ruth.”

“My first, last, and only song about baseball,” the Massachusetts native assured the Moody Theater throng.

Universal is the love for 1970’s Sweet Baby James, which originally grabbed people’s ears with the sentimental “You and I Again,” about love over a lifetime, a musical envelope recreated live by Walt Fowler’s flugelhorn, Lou Marini’s clarinet, and Zonn’s fiddle. The rendition of Buddy Holly's “Everyday,” a song Taylor recorded in 1985, was the definition of yacht rock, drummer supreme Steve Gadd leading the way and the two-man horn section oozing melted cheese.

Some were surely disappointed Taylor never got to “Fire and Rain,” but there was a beautiful duet rendition of “You Can Close Your Eyes” with Austinite Shawn Colvin, a seriously dirty “Steamroller,” and a set-closing bag of hits: “You’ve Got A Friend,” “Sweet Baby James,” and “How Sweet It Is (To Be Loved By You),” a song he’s taken over – improbably but true – from Marvin Gaye.

Two encores seemed unplanned or at least disorganized. Taylor conferring with band members as to which direction to go, an unusual move for a TV taping. They came up with crowd pleasers “Mexico,” given a mariachi horn break, and “Your Smiling Face,” so happy it evoked another TV show, Saturday Night Live.

After 90 minutes of music, no one – performer or audience member – went home any less than supremely satisfied.