Don’t call it a comeback. Consider it redemption. 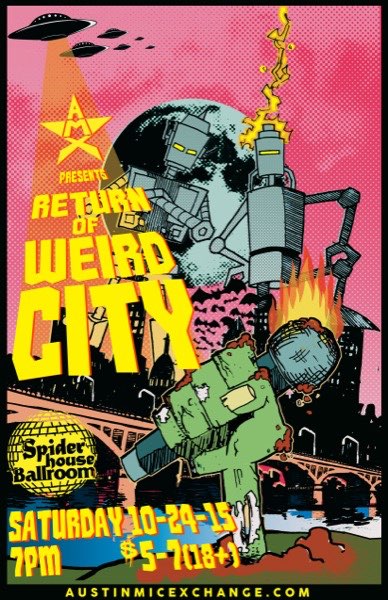 Austin’s only dedicated hip-hop festival floundered this month when poor pre-sales and headliner scheduling conflicts caused organizers to cancel the event. The washout was a gut punch, both for Weird City founders Austin Mic Exchange, who are now tasked with restoring confidence in their festival brand, and also for the city’s greater hip-hop scene, the viability of which has been repeatedly called into question.

“When people saw the festival was canceled, it was easy to point at it and say, ‘Does this mean that hip-hop isn’t sustainable in Austin?’ No,” contends Adam Protextor, whose AMX split with co-promoters Heard Entertainment after this year’s fest disappeared. “One particular event, as it was designed, wasn’t sustainable, but hip-hop is absolutely on the rise in Austin.

“Now we’re trying to prove that. So here’s a show where you can party with us and see all the local acts you could have seen at Weird City – witness the level of quality.”

Protextor just confirmed the lineup for the Return of Weird City, a makeup event slotted for Spider House Ballroom on Oct. 24 and featuring a purely local lineup of 27 acts including LNS Crew, Magna Carda, Dat Boy Supa, and KB the Boo Bonic.

“We needed to do this event, and it wasn’t ever really a question if we’d do it or not,” continues Protextor, who will also perform. “As soon as the festival was canceled, we knew there’d be something else. We don’t have the headliners because our budget is much lower, so instead we’re making a huge party that celebrates Austin hip-hop.”

There’s no Danny Brown, no Jay Electronica, no Freddie Gibbs – none of the pricey headliners with whom Weird City 2 flew too close to the sun and melted its wings. Nevertheless, every act slated for the Return of Weird City was originally confirmed for what would have been last weekend’s festival.

“We can throw a show repping only Austin artists because the quality and variety is there,” says Protextor. “Austin is a city of really diverse hip-hop. I think of that as a strength even though people say the city doesn’t have a sound.

“The demographic we’re hitting goes from your jazzy bands, to your conscious MCs, to your party/club MCs and everything in between. The whole idea is that it can all be together because they’re all good at what they’re doing, even if they're not all doing the same thing.”

Consider this party Weird City 1.5, because owners plan to come back with Weird City 2 in 2016.

“We’re absolutely sure that there will be a Weird City next year,” promises Protextor. “Where we’re at now is essentially looking at the model that we had for this year and last year, comparing and doing our pros and cons of the infrastructure of how the fest was run to see what worked and what didn’t. It’s a big brainstorming session about different ways to do the event.”