Tallest Man on Earth and In the Room

Kristian Matsson burst onto the Moody Theater stage Sunday night with a mid-air spin. Strange move for the Swede, who’s crafted his persona as the Tallest Man On Earth, a demure folksinger more likely to shuffle out with an “aw shucks.” That bit of acrobatics wasn’t the only change. 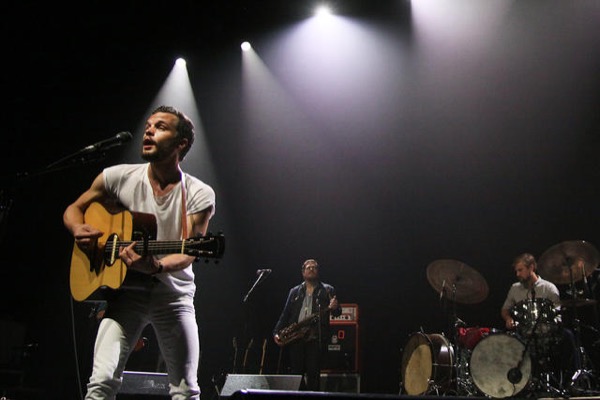 Matsson, who usually arrives accompanied only by a guitar, brought a fourpiece in following up May’s Dark Bird is Home. From the first notes of LP and show opener “Fields of Our Home,” it was obvious why. A performance just shy of two hours proved how crucial a band is to the new material.

The Tallest Man On Earth’s fourth album sounds, well, taller, with sax and pedal steel. Some of us are still wrapping our heads around how brass fits so well in a folk act, but the nuance it gave new songs like “Sagres” proved the point. A lovely garnish of violin brought new tune “Timothy” to life, clearly demonstrating the flexibility of a band.

The group also brought depth to previous material with varying degrees of success. “1904” came across as weirdly poppy, while “The Wild Hunt” benefited from the “big-band” treatment. Fan favorite “King of Spain” didn’t quite flower under the weight of added instrumentation. A song that usually leaves people exclaiming “whoa” only evoked “meh” last night.

The one-two punch of “Love Is All” and “The Gardner,” delivered solo by Matsson, demonstrated what configuration remains most comfortable to him. Despite band show boating at the beginning of the set, the Swede still prefers the kind of stillness he’s been able to affect in rooms like Antone’s and the Paramount. When fans tried to clap along to the stark solo songs, he dead-faced the area until they were shushed into submission.