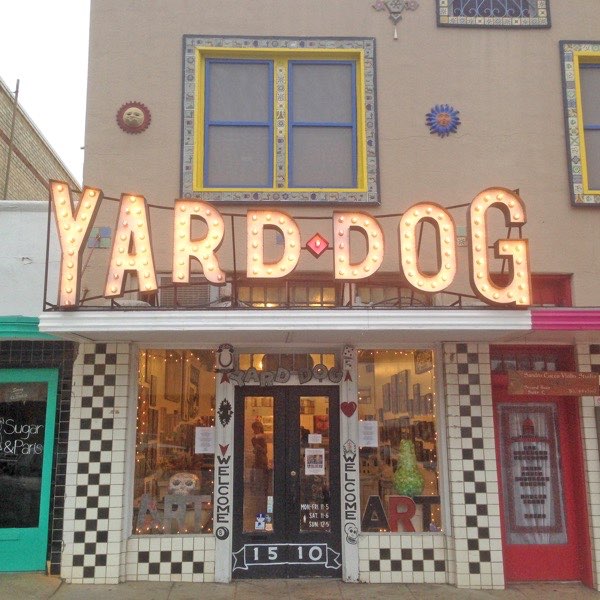 From the start, Franklin sought out artists.

“I pick artists with my eyes, first and foremost,” he says. “Then I ask myself, ’Do I love it? Do I think I could sell it? Does it fit in with what we’re already showing?’ We try to always have art on hand and on the wall by every artist we work with.”

Yard Dog was inspired by Baskett. She became interested in folk art while living in New York City and visiting the Hand-mad gallery in Hoboken, owned by famed Maxwell’s club owner Steve Fallon. A graphic designer, Baskett specializes in branding and identity at her company Foxtrot Bravo Alpha.

Franklin, then, is Yard Dog’s “day-to-day guy.” He grew up in Midland and El Paso. In 1974, the guitarist moved to Austin.

“The music scene brought me to Austin, places like the Armadillo, Doug Sahm, Willie’s Picnic. I got a job bussing tables at the old Saxon Pub, which was at I-35 and 38th Street. All the hippie cowboy acts played there: Jerry Jeff [Walker], Townes Van Zandt, Ray Willie Hubbard, and Michael Murphy.

“Townes and a buddy wanted another drink but we’re out of money. $7 bought them a couple of mixed drinks. It was a ’64 Buick hearse, green, with a ‘Z’ spray painted on the driver’s door. He said they’d been driving it through the Hill Country all day trying to blow up the engine but had only managed to blow out one cylinder.

“It ran for a few days until it didn’t.”

Franklin plays with Mike Hall in the Wild Seeds, alongside Larry Seaman in Why Not Satellite, and in Jon Langford’s band when the UK icon visits town. Franklin met the Welsh poet, punk rocker, and painter in 1996 during the Gallery’s first South by Southwest. Yard Dog and Langford now go hand in hand.

“I have a large cast, but Langford is my leading man,” affirms Franklin.

Yard Dog has hosted renowned SXSW day parties since they opened. Langford’s almost always present, often with his marauding cowpunks the Waco Brothers. Chicago label hub Bloodshot Records, long home to Langford, has staged many an alt.country blowout in the back patio behind the store. 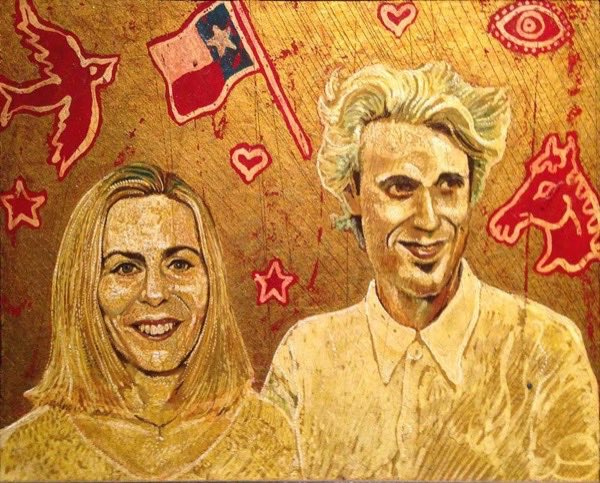 Jan Baskett and Randy Franklin as interpreted by Jon Langford

Franklin met his spouse in 1990 during SXSW when she worked for Details magazine. Two years later, she moved to town and the couple soon married. Yard Dog is their collision of art and music.

“I came out of the indie rock scene, and I think we’ve strived to create a gallery full of art that’s made in the same spirit as indie rock,” explains Franklin.

In that sense, he’s a good talent scout both musically and visually.

“You have to have a reasonably good knowledge of the history of art, an understanding of what’s come before and what’s possible – a sense of self. I don’t think one could do this without having a strong sense of purpose.

“I get a ton of submissions from artists whose work looks like it was done by the same committee of twentysomethings. In other words, their work is over-informed by their culture. Culture influences and informs art, but what makes an artist special comes from inside that artist.

“That’s the kind of artist I’m interested in,” muses Franklin.

Now 62, he says he’s as happy as a man can be between his family, Yard Dog, and still playing music. His son is on the verge of teenhood.

“Fatherhood has changed me in every way. I feel like I’ve been given a great gift,” he says. “I try to deserve it.”

Andrea Heimer: "Folk and Dagger"
In these narrative paintings, the complex human interactions of suburbia depicted are so strange and yet so familiar