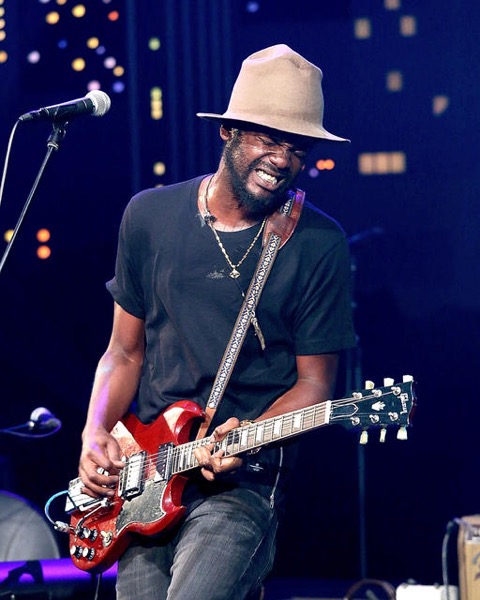 At stadium volume inside the Moody Theater, Clark debuted nine of the album’s 13 tracks. Soulful, plaintive burners, live they arrived engulfed by a war zone of guitars and drums. After warming up on showstoppers “Bright Lights,” “Ain’t Messin ’Round,” and “When My Train Pulls In,” blazing from chunky to muddy to Robin Trower on the latter – which recalled Jimi Hendrix’s “Machine Gun” by embodying its title (in this case a roaring locomotive) – falsettos began introducing the new material.

“First time it’s all coming together,” said the bluesman.

The ensuing “Hold On” didn’t, switching gears several times too many while being drowned out by bass and drums. Three different songs with two clashing solos. “Our Love” again led with Clark’s secret weapon – falsetto – but as before, the instrumental quartet’s low-end boomed like a moving van rolling down your street at 3am.

Austin’s Hard Proof horns elbowed out some sonic space, but if the two backup singers up front with Clark sang a note it never sounded. The hard Seventies soul of “BYOB,” Detroit and Philly tag-team New York City, bagged the best rhythmic cradle of the upcoming tunes, but the ladies in wailing could’ve been miming. “Church,” pared down to Clark, the drummer, and the harmonizers, proved the sole moment of true vulnerability, even more so than the effective lyric to “Wings,” which found the singer at the electric piano as his infant son was being cradled by his mother in said wings just offstage.

“Grinder” lived up to its title as well, and “The Healing” scrubbed away some of the grandiloquence that preceded it. Throughout the set, Clark’s six-string mastery dominated, and despite his obvious desire for another guitarist to play off, the band’s second gun – dressed here for ZZ Top’s Deguello – remains superfluous if not a distraction from the main event. Clark’s raw, visceral fearlessness as a soloist yields little spotlight to anyone else onstage.