“The grand master waved his magical wand for the last time” 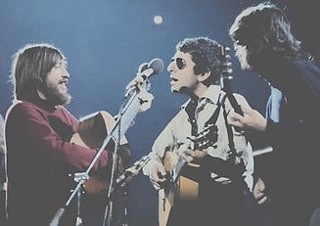 Johnston lent his singular talents, both personal and technical, to a myriad of music in the American canon over the course of his nearly 50-year career. As a staff producer at Columbia Records, he’s credited with Johnny Cash’s 1968 breakthrough At Folsom Prison and its 1969 follow-up, At San Quentin, plus Simon & Garfunkel’s Sounds of Silence and Parsley, Sage, Rosemary & Thyme, Leonard Cohen’s Songs of Love and Hate, and a number of records for Flatt & Scruggs. A sampling of his production discography reveals an A-Z who’s who of recording legends: Hoyt Axton, the Byrds, Jimmy Cliff, Moby Grape, Marty Robbins, Pete Seeger, the Waterboys.

His Lone Star landmarks begin with two seminal long-players that helped spark the cosmic cowboy movement, Michael Murphey twofer Geronimo’s Cadillac and Cosmic Cowboy Souvenir, both from 1983, and are bookended by Willie Nelson and The IRS Tapes: Who’ll Buy My Memories? (1992). Both sandwich Joe Ely’s Down on the Drag (1979).

Though he spent much of his life in New York City and the Tennessee capital, his Texas roots ran deep. His mother Diane penned “Miles and Miles of Texas.” He’s immortalized by his most famous client, Dylan, at the start of Nashville Skyline’s “To Be Alone with You,” when the singer-songwriter of all singer-songwriters asks his producer, “Is it rolling, Bob?”

“[He’s] one of the quieter legends in the music business,” writes Black in his introduction. “Reluctant to blow his own horn, he’s just as determinedly always undermined anyone else’s attempts to do the same ....

“Johnston brought the technical brilliances needed for the sound the artist wanted, recruited the ideal musicians to capture it, and during the recording offered unending enthusiasm, support, expertise, and encouragement,” continues Black. “He championed unique projects even when most other company executives were skeptical and continued to look after the albums even when they were finished and released.”

Friends of Johnston tell the Chronicle that he was in hospice for much of the past week.

“Swinging, swaying, and waving around his hands, telling stories out loud, entertaining and consuming all those that saw and heard him,” one wrote. “Bob’s wife told me he pass[ed] away peacefully. The grand master waved his magical wand for the last time, then disappeared off into the night.” 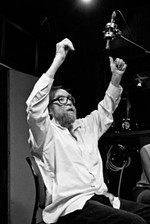 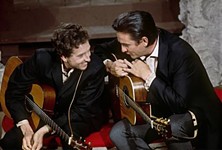