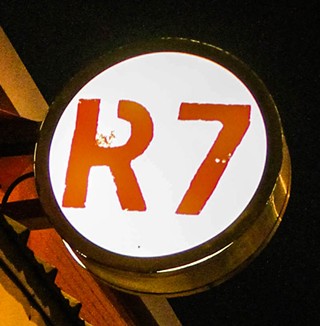 Fourteen days. That’s how long you have to say goodbye to Red 7.

Red 7 co-owner Tyson Swindell confirmed today that the prominent downtown music venue will close on Aug. 28 – a month before its lease expires. The following day sees the early launch of Sidewinder, a new club occupying the Red Eyed Fly building and run by a merger of Red 7 and Red Eyed Fly owners. The final show at Red 7 will be Friday, Aug. 28, featuring locals Riverboat Gamblers and Feral Future, plus Valiant Thor and Nashville Pussy.

“The last night of Red 7 will be triumphant,” predicts Swindell. “Some of the guys in Riverboat Gamblers helped us literally build Red 7 and Valiant Thor are longtime friends of the club.”

As for the decision to shut down the venture a month earlier than previously announced, Swindell sighed.

“There are three groups of people on the leases at Red 7 and this boils down to the dynamics between those groups because, unfortunately, none of them really get along,” he acknowledged. “So everyone’s determined last minute that to make sure everyone gets their bases covered, we need the maximum amount of time to move out.

“We’re worried about the state of the building, because even though we’ve dumped thousands upon thousands of dollars into it and it’s ultimately much better than when we took over, the landlord hasn’t acknowledged that at all.”

In other words, it’s no different than someone moving out of a rental house and trying to get their security deposit back.

“Yeah, except we have a really fucking big one,” says Swindell. “Not only do we want the security deposit, we just don’t want any more lawsuits from this guy. He’s been threatening the subletters and the subletters have been threatening to sue us. It’s been ongoing for two years and we’re just done with it. We looked at the calendar, saw we could move a lot of the shows, and just went for it.”

Swindell says that “90%” of the programming from Red 7 is moving to Sidewinder. A few shows were unable to fit size-wise and have been relocated. None are being cancelled, and all tickets are being honored. Look for a Transmission Events announcement with more details on Wednesday.

Swindell expects Sidewinder to have a sign ready for its accelerated grand opening. He didn’t have any information about which act would be the inaugural headliner there, but it stands to reason – based on Red 7’s calendar – that it could well be Gothic country showstoppers Slim Cessna’s Auto Club.

Until then, Red 7 has a lot of meat left on the bone. Canadian scuzz punks Metz play tomorrow, Saturday, hardcore Aussie melodics Royal Headache load in on Monday night, and proto heavies Death arrive on Thursday. Next Saturday, Swindell plays his own stage for the last time as his band Town Hall Devils opens for East Cameron Folkcore.

For Swindell and Red 7 partner Jared Cannon, who’ll be management at Sidewinder, the hurried transition between venues means they’ll be busting ass for the next two weeks.

“I don’t suggest that people do this,” laughed Swindell. “This is not healthy. It started being crazy two days ago. I’ve been glued to my computer or, if not, my phone is in my hand.

“Other than that, I’m at one of the venues or, occasionally, sleeping. It’s not an easy thing and pushing forward a month has been tough, but we’re going to make it.” 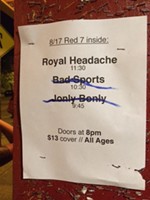