Year-long reissue campaign ranges over the hills and far away

Cornered on a junior high school bus and menaced by suburban thugs, I the Rolling Stones lifer refused pledging ultimate fealty to Led Zeppelin. When John Bonham died soon after, my Zeppelin IV and Houses of the Holy LPs still paid that debt in neglect. By college, during a second British Invasion, Zeppelin and Rush blared exclusively in my cave.

On loop, really. I’d ping-pong between the catalogs, spending days, weeks on any single album before cycling backwards and forwards through the oeuvre in a conscious memorization of each canon. The Smiths, Echo & the Bunnymen, U2 – missed it all. Houses of the Unholy: Each Zeppelin deluxe remaster color reversed its original art – this one again by Hipgnosis – for the bonus CD’s alternate album mix.

Inclusion of a period live performance on the initial reissue promised far greater glories than those ultimately delivered. Paris 1969 comes on like a good audience bootleg of the world’s heaviest garage band, who, minus all the overdubbed studio guitar, bludgeons the blues sans swing and at epic lengths. Into the void: “Dazed and Confused” (15 minutes), “You Shook Me” (12), “How Many More Times” (11), “Moby Dick” (9), and now no longer a Coda bonus and thus otherwise absent from the reissues, instrumental stepping stone and BBC bauble “White Summer/Black Mountain Side.”

Conversely, a scant 32 minutes of barely alternate mixes from an LP whose opener all but spawned its own genre more so than even Cream or Iron Butterfly, telegraphs an ugly, alternate truth about the ensuing bonus caches: barrel scrapings goosing another catalog cash-in. A last scrap, “La La (Intro/Outro Rough Mix)” anticipates the electro/acoustic rave-ups to follow on Led Zeppelin III.

Once a runt of the litter, time thundered Led Zeppelin III past dark horse straight to black beauty. A tremulous acoustic guitar/harp jam on “Key to the Highway/Trouble in Mind” joins the library anew, but an electric workout of “Bron-Y-Aur Stomp,” provincially titled here for Robert Plant’s farm in the Seventies, graduates to the grown-ups table as a keeper. A backing track for “Friends,” rough mix of “That’s the Way” out-polishing the original version, and an early mix of legitimate blues legend “Since I’ve Been Loving You” wallow joyously in the guts of a folk-rock disc like no other.

Raw, as if someone offed the Dolby feature on a Seventies home stereo (once an electronic system for external home amplification), the shadow version of Zeppelin’s holy grail hasn’t yet sanded off all of the rough edges. That nearly imperceptible grit distinguishes it from the mothership. After a shrill tweak to “Black Dog,” mandolin/guitar mixes for “The Battle of Evermore” and “Going to California” prove the umbilical chord connecting III and IV.

See above on Led Zeppelin II. “The Song Remains the Same (Guitars Overdub Reference Mix)” confirms than neither a vocal nor lyric was ever needed on the Houses of the Holy launch song, but “The Rain Song (Mix Minus Piano),” not so much. Where, for instance, is the fabled “The Rain Song (Minus Nimbus Mix)”? Outtakes from the album package by Hipgnosis (Pink Floyd, Peter Gabriel, UFO) might have covered for the fact that all of the album’s outtakes ended up on the ensuing Physical Graffiti.

Key bonus track: “Everybody Makes It Through (In the Light) (Early Version/In Transit)”

Fattest disc – a double CD/LP – yields thinest booty. Since Physical Graffiti paired fresh crunge with gourmet leftovers from the first five discs (“Houses of the Holy”), it’s little wonder nothing’s left here but scraps. Bones to gnaw on include unfinished mixes for “Sick Again” and “In My Time of Dying,” but an even hippier, dippier version of “In the Light” stands head and shoulders above the vacuum by default thanks to its virtual improvement on the original.

Recorded and mixed over 18 days in Munich – with Plant in a wheelchair after a car wreck in Greece – Presence shakes down a temple bearing not one single, solitary frill. As with Physical Graffiti, then, there’s zero session antimatter after the fact. A rougher mix charges up the already volcanic “Achilles Last Stand,” and an almost seven-minute instrumental led by piano, “10 Ribs & All/Carrot Pod Pod (Pod),” thumps along like a lounge act at your local Hyatt.

And who laid down the alternate vocal on “Royal Orleans,” Bonzo? I actually know a local who owns one of the vintage promotional “objects” central to Hipgnosis’ album art concept.

Revisit the (non) surpluses of Led Zeppelin II, Houses of the Holy, Physical Graffiti, and Presence to experience the paucity herein. Hammer of the Gods now reduced to lambs limping toward the slaughter, the UK quartet’s final studio LP constitutes a merciful last gasp. Plant’s 5-year-old son had died suddenly while the singer was on tour two years earlier, Page succumbed to addiction, and 13 months later, Bonham followed AC/DC’s Bon Scott to the barroom down below (Sept. 1980 and Feb. 1980, respectively).

John Paul Jones thus takes up the reins on his new synthesizer, hence a less mulchy mix of epic filler “Carouselambra” – whose working title was indeed “The Epic.” An atmospheric mix to “In the Evening,” its vocal suddenly somewhat intelligible, jacks its snarling-cat guitars higher in the mix. Hipgnosis’ paper bag wrapping of the Grammy-nominated LP for packaging returns to house the new Digipak, just as the reissues also recreate the pinwheel for Zeppelin III and cut-outs on Physical Graffiti.

Both bonus discs to one of the great compendiums in rock – a posthumous contractual obligation spanning Zeppelin’s career – could fit on a single CD, but the riches herein relegate that to a quibble. “If It Keeps on Raining (Rough Mix)” spins like a modern remix of IV’s “When the Levee Breaks,” tighter, lighter, more ghosts in the machine. Led Zeppelin outtake “Sugar Mama” comes sprinkled with the same sense of discovery as previous vault revelations, BBC live cuts “Travelling Riverside Blues” and “Baby Come on Home,” both appended to Coda on Zeppelin’s 1993 catalog box set.

A jam from Led Zeppelin III, which liquifies like a John Frusciante-led Red Hot Chili Peppers jam far in the future, “St. Tristan’s Sword” takes “Whole Lotta Love” as its leaping off point and heads over the hills and far away. A clattering mix of “The Wanton Song” from Physical Graffiti and corrosive “Bring It On Home” are crowned by Page & Plant previewing their 1999 Walking Into Clarksdale reunion three decades earlier in India with the Bombay Orchestra on “Four Sticks” and folk fave “Friends.”

Coda Deluxe Edition – 33 years after the fact, and at thrice the closure. 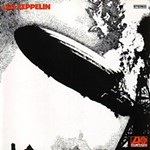