Sharks in the Water

This week, American Sharks shove off on a national tour. Since releasing their eponymous LP in 2013, Austin’s speed-sludge trio has toured under the wicked wings of Gwar, Clutch, Red Fang, and the Sword, but this August run represents a greater test for the Sharks. It’s their first bid as a headliner. 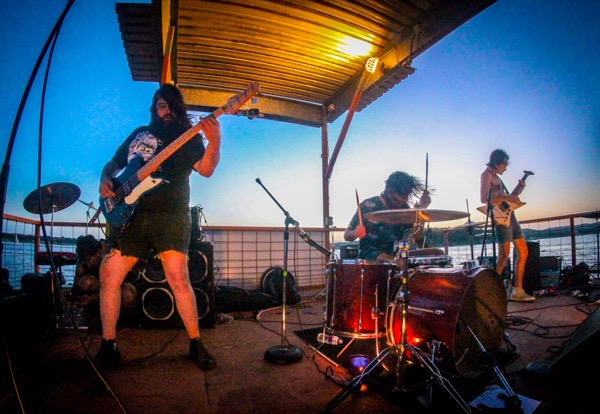 As such, a tour kickoff show was imminent. Hotel Vegas would’ve been expected. Outside at the Mohawk would’ve been manageable. Instead, the American Sharks began their tour on a boat.

They slotted into the annual summer boat party for Pau Wau Records, the stepping stone label operated by Shark’s drummer Nick Cornetti, a clever businessman once described by a musician on his roster as “the stoner Steve Jobs.” As he has several times before, Cornetti secured a party barge on Lake Travis, stocked it with bands, booze, and food, and sold it out.

The two-story vessel and its 140 passengers launched from the shores of Lago Vista on Saturday afternoon, motoring over Lake Travis and docking on an unpopulated island. As guests cannon-balled off the barge’s top deck into warm waters where ice-cold beers were tossed into their eager hands, Borzoi made waves.

The young trio, whose vision of post-punk is lively, wiry, and grunge-stained, played tight and defied all logic in becoming a fun-in-the-sun soundtrack. Having formed in 2013 and self-releasing an EP last year, Borzoi’s the latest addition to Pau Wau’s roster with a 7-inch single arriving this month. The platter, previewed on Saturday, spins magic in the skinny overdrive and golden vocals of guitarist Zach Wood on A-side “Pinnacle,” while the flip side flies on the rugged beats and urgent vocals of Rhys Woodruff.

Having gotten properly waterlogged, much of the crowd reclaimed the top deck to absorb Hundred Visions’ catchy fuzz bombs. With the rhythm section of Eric Loftis and Wes Turner exhorting extra volume out of guitarist/vocalist Ben Maddox, who wore an influence-exhibiting Meat Puppets T-shirt, the local trio proved to be the boat’s loudest band as they bashed out “Thanks for Nothing,” off last year’s Pau Wau release Spite, with power and precision.

”Hundred Visions is the best band in the world,” shouted American Sharks bassist/vocalist Mike Hardin. “We’re going on tour together and we have to play after them every night, which fucking sucks because they’re so good.”

Hours earlier, the captain explained that if you got too wasted, you’d have to remain on the boat wearing an orange life jacket. By that logic, Hardin should’ve been wearing it while the American Sharks played. His sassed, satanic baritone was slurred, and his usually clever between-song banter was relegated to semi-coherent ramblings about buttholes.

Cornetti had promised me hours before, “This is going to be a very drunk Sharks show.”

So was the audience, and it was nothing short of beautiful watching the group throw down an uninhibited performance with the sun setting behind them and the island growing smaller as the barge headed back to Lago. After a string of new songs, the audience demanded “Cocaine” and the Sharks acquiesced with guitarist Will Ellis floating buoyant riffage over Cornetti’s earthquake drums and Hardin roaring, “We are the angels of fire!”

”We’ve got one more song,” Hardin announced to resounding boos. “Okay fine, we have 50 more songs.” Will Ellis (l) and Nick Cornetti reacting to a visit from the Travis County Sheriff. (Photo by Kevin Curtin)

As the Sharks continued, a Travis County Sheriff boat with three officers pulled up alongside the barge and one of them jumped on board. He watched the band play for a moment and then signaled down to the officers in the boat by making the heavy metal horns and banging his head. When the band noticed the police boat, they stopped and Cornetti and Ellis walked over to the rail to communicate with them.

“One more?” Cornetti asked, holding his index finger in the air.

The officer gestured back: "Two more!"

The crowd went nuts and the Sharks closed it out with muscular versions of aggro-anthem “XVI” and mystical rocker “Indian Man.” Then it was land-ho and van-go because the end of one trip is always the beginning of another.