The new members of Austin’s Music Commission convened for the first time Monday evening. The inaugural meeting was akin to a band’s first rehearsal. How does the song go? Who’s taking the leads? What’s our message? 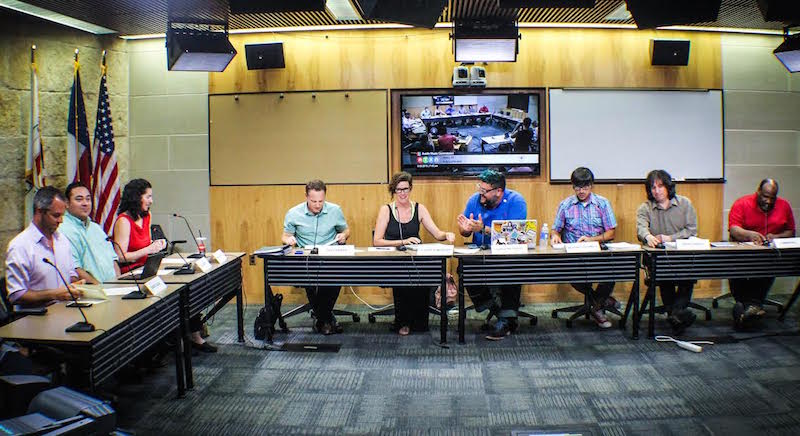 Both were unanimously voted in.

Compared to the previous Commission, a leaner group complete with an influential industry figure in South by Southwest’s Brad Spies, this year’s appointees are relatively green. Only Reynoso, tapped by Mayor Pro Tem Kathie Tovo, returns from the previous iteration, and Garcia, who served on the Commission two decades ago, has the second most experience. This larger Commission stands as a result of Austin’s 10-1 council shift. Each council member has appointed one representative for their district.

“At first I wasn’t very excited about [the 10-1] format,” admitted Reynoso after the meeting. “I was kind of bummed because we had a great Commission, but now I think it gives us a really good opportunity to say, ‘This is what’s happening in my area,’ and actually zero in on some of the communities that haven’t been given the attention they need.”

During the “Citizen Communication” portion of the gathering, Austinites have three minutes to convey their own concerns to the Commission. Vulcan Gas Company co-owner Susan Espinoza revealed that rampant alleyway loitering and the subsequent odor of urine behind Sixth Street is negatively impacting their ability to rent to large clients. Austin Music People Executive Director Jennifer Houlihan urged the Commission to support Fun Fun Fun Fest in its pursuit to use portions of Auditorium Shore’s dog park in their festival footprint. Entrepreneur Chris Bush discussed his new band tipping app Tipcow.

And former Music Commission member and Austin Music Foundation head Brad Stein informed the new group of their key purpose: “To get feedback from the music community and give that to Council.”

“Permitting is a big one – the entertainment license would be really helpful to venues,” said Reynoso about a proposal to create a singular venue license instead of the plethora of permits currently required to lawfully operate. “I personally believe that the permitting system in Austin is essentially counterproductive to musicians and venues, because if they venues are suffering, then we’re suffering as musicians.

Another Commission goal is increasing diversity and representing the underserved cultures in Austin music.

“Austin is a portrait of inequality and music is part of that portrait,” stated Garcia. “There are underserved communities and in my 40 years of music experience it’s been hip-hop, urban, Latin, and Asian music that have been forever marginalized in Austin. We need to strive for more inclusion. If we gain the advantage of uniting the community through cultural arts and music, then I think City Council will expedite a lot of what we ask for them if they see people of color at the table.”

As well as each appointee being a conduit for the concerns of their district, Reynoso says that information gathered by the recent Austin Music Census will help them formulate specific resolutions that have a chance of influencing civic policy.”

”Data is everything right now,” he said. “City Council members are new pretty much and we’re all new, so we really need data to understand how and where musicians are working and which issues are important. It’s key to how we move forward."