There was no prelude to Death Grips’ Saturday night stranglehold at Mohawk. The Red River mainstay had been stuffed since shortly after 8pm, but no opening act, no DJ, no prerecorded music set the mood. Just hundreds of hot, restless bodies anticipating a kinetic experience. 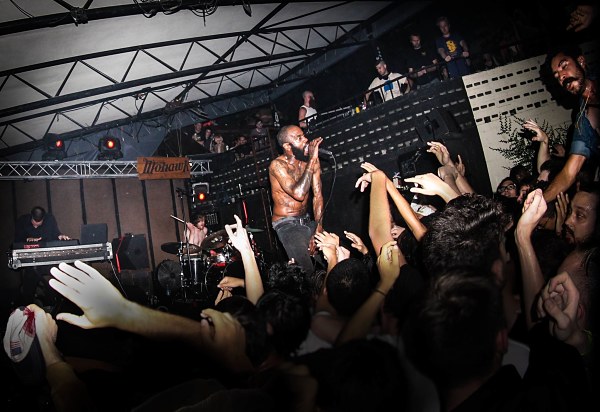 Those spectators were rightfully concerned that any opportunity to witness the unpredictable Sacramento, Calif., noise-rap trio could be their last. As such, the house surged towards them at 9:40pm, when drummer Zach Hill, MC Ride, and key-pusher Andy Morin took the stage under minimalist production. What else do you call three stationary red lights and a smoke machine?

Without introduction, Hill and Morin broke into “Runway E,” a cataclysmic instrumental from January’s surprise release Fashion Week. Then they edged into early catalog aggressor “Takyon (Death Yon).” Ride, with his chiseled, tattooed physique and Iggy Pop wardrobe (black jeans, no shirt), flexed in front of the churning mess of human bodies, unconcerned.

The aggro rapper, real name Stefan Burnett, brought his blunt prosody to an early high with the echoed, down-tempo “Intimate Sensation” off March comeback LP The Powers That B. The pit was 200 degrees Fahrenheit by the time Ride ushered a sing-along to the skipping hook of Money Store favorite “Get Got,” doing a heroin jig to the fluttering beat, then becoming physically possessed by the warping tempo changes.

Death Grip’s long-awaited return to Austin after a pulverizing warehouse set at South By Southwest 2013 follows two cancelled performances at Fun Fun Fun Fest, booked by Saturday’s promoters Transmission Events. The Northern California experimental troupe had similarly bummed out fans by breaking up in July 2014, only to reform this March with a new album and the announcement of a lengthy tour. At Mohawk, they made amends with a show that pushed the boundaries of physical endurance – no rest, no banter, just song after song of crazy beat aggression.

As the set began its second hour, the trio’s energy stoked fan fervor hotter and hotter.

Link Wray’s distortion-inventing “Rumble” got repurposed for “Spread Eagle Cross the Block” from 2011’s Exmilitary mixtape. By then, Hill had eclipsed Ride as the star of Death Grips, with power drumming informed equally by jazz and experimental rock. His precision snare roll unfolded into “Lock Your Doors,” a menacing track from controversially leaked LP No Love Deep Web, during which Ride, raging autobiographically, tanked his upper body forward and backward like his torso was an accordion:

Shortly after making heads roll with crowd favorite “Guillotine,” Death Grips vacated Mohawk in haste. While a looped sample persisted, the three members scurried off stage right, out the alleyway exit, and into a black Cadillac Escalade. MC Ride rode shotgun, while Hill and Morin jumped into the back.

Those on the venue’s top balcony watched the SUV pull a hard 180-degree turn and speed off north on Red River – out of sight in seconds. Meanwhile, those in the venue’s lower level cheered for an encore.