The Inevitability of Dawes

“There was never a point I said, ‘What am I going to do with my life?’”

Los Angeles’ Goldsmith brothers, Taylor and Griffin, lead indie folk-pop quartet Dawes, performing tonight at Stubb’s. The group, which released its fourth studio LP All Your Favorite Bands earlier this month, is known for raw and real live sets. Frontman Taylor Goldsmith took time out to chat by phone from a tour stopover in Houston. 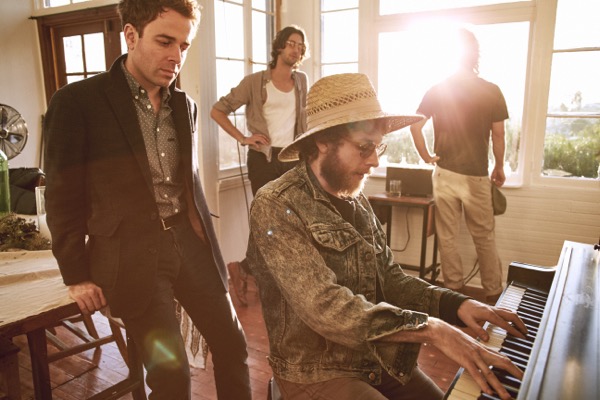 “The first record [2009’s North Hills] was recorded live because we didn’t have any money,” begins Goldsmith. “We only had a couple of weeks to record, so we had to do it all at once, pretty much. We were very green.”

North Hills was soulful, full of harmonies, winning over critics and fans from the get-go. New disc All Your Favorite Bands remains faithful to that initial vision. As with the rest of Dawes’ discography, it beckons the early-Seventies Laurel Canyon vibe of Joni Mitchell with the grit of a toned down Jim Morrison.

“Then we did our second and third records,” continues Goldsmith, “which I really loved, but I think there was always an element of, ‘How do we bring what we’re doing onstage onto these records?’ So with this new record I said, ‘Let me just sing the songs and play the solos with the band. Let’s just all be in the same room together, take off our headphones, and look at each other.’

The Goldsmiths grew up all over the Los Angeles area. Taylor played in various bands, and once his younger brother Griffin took up drums, their musical collaboration was sealed.

“Griffin and I always knew we were going to play together, so once he got close to graduating high school, we both started taking it a little more seriously. We went right into touring and playing shows together straight out of high school.

“It’s been great playing with Griffin. It’s one of the true joys of my life. We get along really well. We see music the same way, and we know how to get behind each other in terms of what the other is seeing or wanting to do. He’s always the first guy I talk something out with or that I show a new song to.

“We grew up singing with our dad, learning to play piano and learning to play guitar. There was never a point that I said, ‘What am I going to do with my life?’ I just always said, ‘I’m a musician.’ It was always an inevitability situation.

“And I’m not trying to sound all New Age saying, ‘I had to do this’ or ‘I was meant to do this.’ It was just something that always appealed to me. Something I always connected with.”

Nothing is Wrong is Right
Dawes stops into La Zona Rosa