“We’re not fucking around! This is serious!”

The New Media Art & Sound Summit this past weekend sustained an unrelenting barrage of experimental artists. No sooner had one act moved off the Salvage Vanguard Theater stage than another played 10 minutes later. From KORG-powered faux jazz to abstract films about squares it might have all bled together save for the fact each set sounded uniquely weird. 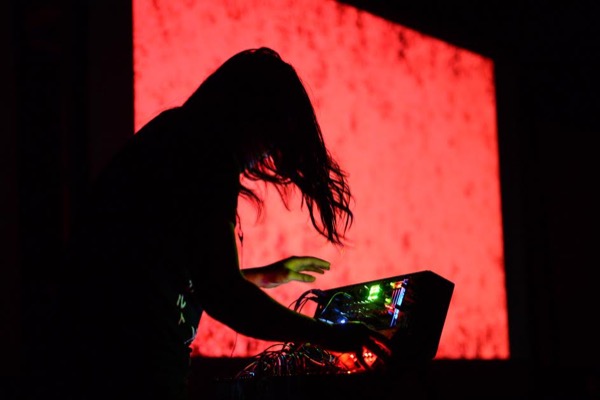 The whole festival could be summed by the performance of Daphane Park and Raquel Bell, who put on a ritual healing of the Earth through screaming, dancing in polyester rags, and a synthesizer rendition of Funkadelic’s Maggot Brain. The act ends with the two holding each other very close, almost to a kiss. George Pasterk, one of the summit’s curators, stood up and shouted.

“We’re not fucking around! This is serious!”

The audience paused for a second before laughing, unsure of his sincerity.

Pasterk belongs to the Church of the Friendly Ghost, an arts collective that promotes adventurous music in Austin year-round. This annual festival distills that spirit into a single weekend. NMASS grows in attendance and performers every spring, and in its fifth year invited more than 75 individual musicians and artists to represent a spectrum of genres and styles ranging from the insane to the tranquil. Headliners balanced the two.

On the completely maddening side, Richard Devine once again proved the most creative modular synth performer anywhere. Each beat to every measure sounded like a sample from a completely different, but equally frantic, song. And the strobe light live stream of himself – projected on himself – added an extra dimension to the spectacle.

Kid Millions & Jim Sauter’s blistering and chaotic jazz/drums set distilled PCP in sonic form, clocking in at just 17 minutes. The rapid-fire percussion and mad sax blasted with improvised ramblings always falling in the pocket. Kid Millions gave an especially impressive performance, both accompanied in this set and later as solo act Man Forever. His characteristically energetic and precise style remains best described by Boredoms drummer Yoshimi P-We: “A very special way of playing drums, as if he were guzzling something very tasty.”

At a experimental mashup like NMASS, skipping the side acts constitutes criminal neglect. David J. Simon broke the mold of the typical theremin act at a molecular level. Far from making simple and spooky ghost sounds, he used his instrument to sample sounds and sights from popular culture, speeding them up, slowing them down, whirling them up in a Brechtian blender, and spitting them back out as parody.

In “Occupational Therapy,” a recurring clip of a man with a chainsaw falling into a shark tank plays solemnly in slow-motion, followed immediately by a high-speed video of a woman slapping someone. “Snapoutofit,” she says repeatedly. These and other segments played over and over in various layers and speeds, gaining new meaning with each iteration.

No less stunning, the Andrew Weathers Ensemble utilized a whole arsenal of Country & Western weapons to wage a new drone war. Slide guitars, banjos, fiddles, lyrics about “The Lord” and being lonesome – it could’ve sounded like Bill Callahan except the sounds all buzzed together in a thick twang.

And although less polished (this marked their debut), the Tucker A&M Perry Coalition put forth some of the more relatively traditional dance grooves in the summit. In this case, traditional means they still use retro KORGs to play self-described “scary jazz.” The funk in the room was palpable, to say the least.

Outside the music sets, NMASS crammed aesthetics into every square inch of the Salvage Vanguard Theater. At least six different interactive art installations entertained guests in the main room. Its comparative intimacy – maybe the size of a small fast-food dining room – only added to the overall efficacy of most acts.

Hanging lights sounded small chimes when pulled. A camera projected a strange, distorted live stream of the room onto a wall. Everything was curious, wonderful, and I suspect absolutely meaningless.