Everybody wins at the Braun brothers’ celebrity softball jam 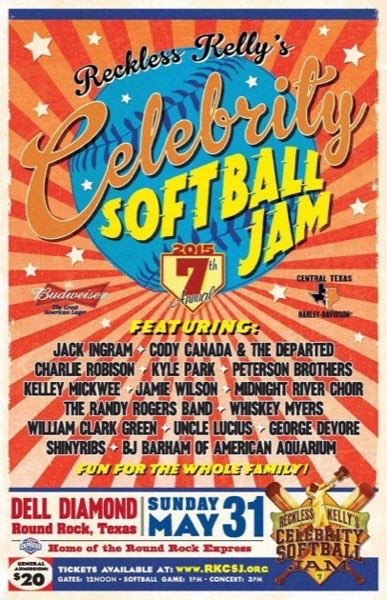 I met up with Reckless Kelly’s co-frontman Cody Braun, vocals/fiddle/mandolin/harmonica, at the Downs-Mabson Field on E. 12th Street. Tuesday was baseball drill night in anticipation of this weekend. The locale is one of the sandlots RK’s seventh annual fundraiser supports.

“When the recession hit, the city cut back on funding the little league parks,” explains Braun. “A lot of these older parks are getting run down and unsafe. We do little things like rebuild the bleachers.”

“[The Downs-Mabson] neighborhood is 80 percent single family,” says Braun. “RBI goes into underprivileged neighborhoods and helps get kids into baseball by mentoring them. They encourage the players into high school and offer scholarships for college.”

Cody and his brother Willy Braun are known for their passionate baseball fandom, which can lead to some heated, yet playful, arguments. Willy remains a Red Sox fan, Cody a Yankees booster.

“I grew up following in my dad’s footsteps as a Yankees fan in Idaho,” affirms Cody. “Then I moved to Texas and started to follow the Rangers and Astros. Willy got to go see the Red Sox during the World Series the year before last. We’ve become friends with a lot of players.

“Getting to know those guys on a personal level has been great. We watch them pitch and then we go play golf with them. Then, when you watch them on TV, it’s more like rooting for your buddies than for a team.

“Still, if the Yankees are playing the Rangers ....”

One of his all-time favorite players is Don Mattingly, who played his entire career for the Yankees and now manages the Los Angeles Dodgers. Braun’s dream team would include Mattingly as coach and my father, Jon Dee Graham, “screaming as the umpire behind the plate.”

Since Braun’s all about one liners, the rest of his team would follow suit.

“I’d have mostly comedians,” he nods. “I’d have Bill Murray as my first basemen and Sarah Silverman as my catcher.”

“Most ball players are really great guys,” enthuses Braun. “A lot of ballplayers I know play guitar. They all want to be musicians and we all want to be ballplayers. We love baseball. We love music. We get to hang out with our friends and have a great time. Everybody wins.

“We have about 30 people on each team, so it’s hard making sure everyone gets a chance to play. And same with the bands. We have about 20 bands in one day on two stages. We try to rotate the players and bands to keep it interesting.”