May keeps coming up roses for Jimmy Buffett nuts. For the fourth consecutive year, the pride of Jerry Jeff Walker converts crowned local rehearsals for a summer tour with an Austin nightcap. A raucous Moody Theater show May 30, 2012, and a pair at Circuit of the Americas – May 5, 2013, and May 31, 2014 – now cede to the new top dog: Stubb’s, Tuesday, May 26, 2015. 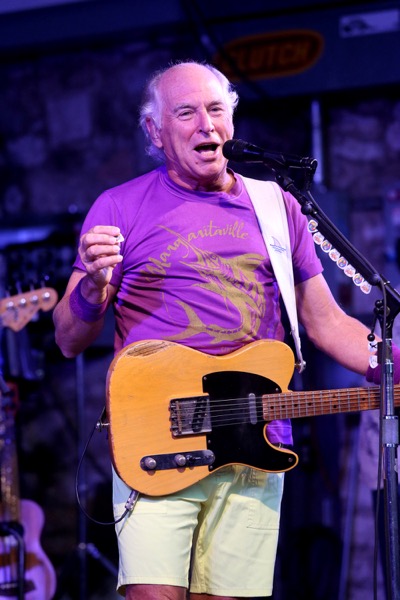 “Look what rolled in with the flood!” crowed the singer at the stroke of 8pm. Announced a week ago, the instant sell-out left its money to local aid in the wake of the weekend’s calamitous rains, according to Buffett. “I looked out my hotel window yesterday and thought Austin could become an island here any minute.”

Instead of building an ark, JB delivered a heroic relief effort, bridling with pent-up energy and all but leaping in the audience to surf fanatics instead of remote corners of the globe. Mega acts often touch off mondo tours on a much humbler scale than their usual stadiums, including the Rolling Stones last week in L.A. for a tour whose only Texas date remains June 6 in Dallas. Buffett riling up some 2,500 lucksters under an unmenacing sky on the Red River strip bore the unmistakeable whiff of “only in Austin.”

“Why isn’t there a direct flight between Austin and Key West,” stamped Buffett after transforming Austin into an isle anyway with the barefoot country-folk of Eighties bookends “Coconut Telegraph” and “Off to See the Lizard.” If anyone can make Southwest Airlines reinstate that flight path, it’s a cottage (condo) industry like Jimmy Buffett, 68.

Bowing to Lubbock pedal steel maestro Doyle Grishman on the stage riser (“He’s played on every album”), Buffett doubled up a pair of oldies from his post-Nashville coming out. 1973’s A White Sport Coat and a Pink Crustacean yielded early set pieces “Grapefruit – Juicy Fruit” and “The Great Filling Station Holdup,” whose ripple effect into LP-mate “Why Don’t We Get Drunk” late in the show gave the performance serious throwback appeal. The latter two especially flashbacked to a songwriting sweet spot where the Gulf Coast playboy had tapped his talents for crisp, classic country ditties done Texas style: Southwestern sly and wry. Zero fat, but all beef.

If the Stones can bow to whole-album hipness by kicking off their current trek with Sticky Fingers, surely Buffett’s band of a dozen can oil up a catalog monument like 1974 travelogue A1A, whose pearl, “Tin Cup Chalice,” closed the show solo acoustic.

“Some ocean came inland this week, so we’ll try to push it back out,” he offered as warm-up to “Son of a Son of a Sailor.”

He also divulged partial explanation for his giddy exuberance: Coral Reefer Band backbones Mac McAnally and bandleader Michael Utley married off a daughter and son, respectively, to each other.

“A next generation wedding!” exclaimed Buffett, beside himself.

The hits thus crackled and popped with extra vigor, including new set inserts “Blue Guitar” and Lyle Lovett’s “If I Had a Boat,” which should’ve been a given in its upscale Buffettness, yet neither its lyric delivery nor tempo ever clicked. Between “Great Filling Station Holdup” segueing into a gritty snippet of “Midnight Rider” and Crosby, Stills & Nash appropriation “Southern Cross” billowing in gusts, the band hummed and bucked. “Come Monday” shouted out ATX music scene bygone Castle Creek, where the song “Margaritaville” began life.

“When it comes right down to it, Austin is ‘Margaritaville,’” proclaimed Buffett.

A 95-minute main set wrapped with two quick songs and Buffett bounding offstage no doubt to the bar he had promised at the outset when admitting he’d had an adult cocktail before the show. Perhaps that explains two additional verses in “Margaritaville” about falling off a stage in Australia, not to mention some of it sung in Spanish. Jimmy Buffett and Austin go together like lime, tequila and salt, salt, salt.

“License to Chill” “Coconut Telegraph” “Off to See the Lizard” “Grapefruit – Juicy Fruit” “The Great Filling Station Holdup” “Son of a Son of a Sailor” “It’s Five O’Clock Somewhere” “Blue Guitar” “Come Monday” “Volcano” “Fins” “Margaritaville” “Bama Breeze” “Cheeseburger in Paradise” “Why Don’t We Get Drunk” “If I Had a Boat” “A Pirate Looks at 40” “Southern Cross” “Changes in Latitudes, Changes in Attitudes” ----------- “We Are the People Our Parents Warned Us About” “Tin Cup Chalice” 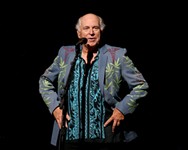 Monday Comes to Austin for Jimmy Buffett
Deep cuts and musical tributes, but no pink Crustacean