Earl Sweatshirt’s primary interests are few, so the 21-year-old Odd Future MC is direct about them: skating, having sex, and making music. You can hear about all three in person tonight at Emo’s.

The L.A. wunderkind fell in with Odd Future in his teens, releasing a Tyler, the Creator-produced debut LP, Earl, the summer of 2010. When Sweatshirt’s mother, a law professor at UCLA, killed his extended rager with a ticket to a Samoan boarding school, fans erupted into a panic.

Working his way through the program, Sweatshirt, born Thebe Neruda Kgositsile, emerged a year later with a fresh perspective. His third studio LP, I Don’t Like Shit, I Don’t Go Outside, reflects both his growth as a rapper and as a person. 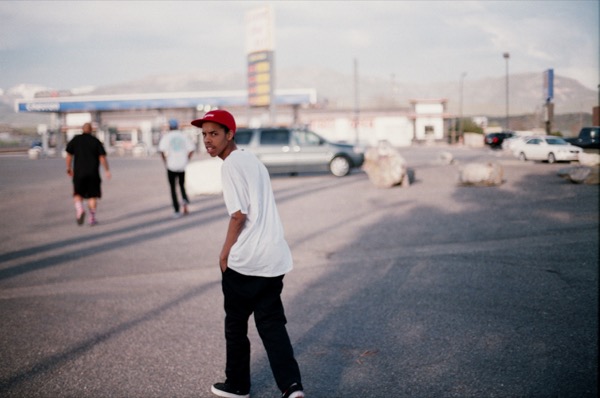 AC: So your collaborator, Tyler, the Creator is now infamous in Austin for having allegedly incited a riot during South by Southwest 2014 at Scoot Inn. Have you guys talked about that?

ES: Yeah, I remember he was all bummed. He’s not a person that would do well getting put in a box. And he was getting all discouraged; he was about to cancel his show and shit. I called that fool, told him to use that energy to go have a good-ass show. And he did. I think he went to Dallas and had a really good show.

AC: You just released a new track called “Solace” with a spoken word element that shook some people up.

ES: [It’s] a snapshot of wherever I am at a certain point in time. Like that was that music that got done right when I set the studio up in my house. I’m trying to catch up the consumer base with the rate that I do music at, so that everyone’s not consistently behind.

AC: So rather than waiting until you have a handful of songs for a mixtape, just put them out one at a time?

AC: Is it true you’re kind of shy about rapping in front of an audience?

ES: Nah, I just don’t like to waste that shit. I’m not shy; I just like doing it in the appropriate setting. Just like stand-up comedians that aren’t trying to do stand-up for groups of like two people because it’s their job. Like why you wouldn’t have your dad that’s a plumber work on plumbing shit at the house.

AC: There’ a marked change in tone between your second album Doris and I Don’t Like Shit, I Don’t Go Outside. What changed about your approach to crafting an album, or rapping, in between those two?

ES: What I was saying is it’s just a natural progression that comes with growth. I don’t know. The good times got better, and the bad times got worse. Just life-wise. That’s what comes with getting older, I think. Your responsibility gets greater.

AC: You were 20 when you recorded the new album, and maybe 15 when you put together your first LP. Was there a difference in the experiences?

ES: Absolutely. Like I said, it comes with getting older, just your grasp on what you’re doing – not flying blind.

AC: How did you go about recruiting guest spots for I Don’t Like Shit? It seemed like Doris was pretty star-studded, and your latest not as much. A bit fewer voices in there.

ES: I just did songs with the people that I was around. Yeah, I’m getting more comfortable. It just happened naturally.

AC: One of the tracks that stuck with me was “Grief.” Did it help you deal with your grandmother’s passing? Do you listen to that track a lot?

ES: No. It was like being alone. No, not really. It’s a fun verse to do, when I do it live. But like I said, I don’t bring work home. The music that I use now to tour with is not music that I’m listening to at home.

AC: Have you been to Austin a lot? Do you have fun when you’re here?

ES: No, I don’t really do shit. I mean, I like doing things, but it’s a pretty small list. I like skating, just fucking, and doing music.

AC: Your mom sent you away to boarding school after your debut album came out. A lot of people thought that would stunt your musical growth. Do you think she made the right decision?

ES: Absolutely, 100 percent. It made me find myself so that I’m not just shit like everyone else – people that aren’t in tune with themselves. I really found out who I was, so I don’t get caught up in my own emotions. Now I know what my emotions are and can express them. I also learned how to communicate really well.

AC: Were you totally away from hip-hop at that time? Were you writing?

ES: Yeah, I was listening to music and stuff. I love music. Like, I never don’t listen to music.

Thebe Kgositsile and Earl Sweatshirt Become One at Emo’s
L.A. rapper shakes off some of the melancholic