The Eagles Come Home to Roost

Platinum ego encases History of the Eagles, a three-hour rock doc (on Netflix and mailed to concert reviewers) that spawned a two-year tour. Founders and songwriting axis Don Henley and Glenn Frey wield their aural iconography like a tomahawk – screw up, get scalped. Tuesday at the Erwin Center, they selflessly ceded half of a three-hour show to Joe Walsh.

Not literally half. Yet by framing the epic second set with “Pretty Maids All in a Row,” the guitarist’s vocal contribution to 1976’s Hotel California – a No. 1 album that lost the Grammy for Album of the Year to Fleetwood Mac’s Rumours – and his co-write from the same album, “Life in the Fast Lane,” the Eagles very nearly reverted to their genesis as a backing band. Henley and Frey hatched the Eagles while touring behind Linda Ronstadt.

Last night, they powered the band member that by Frey’s admission needed no introduction and in fact received his last. 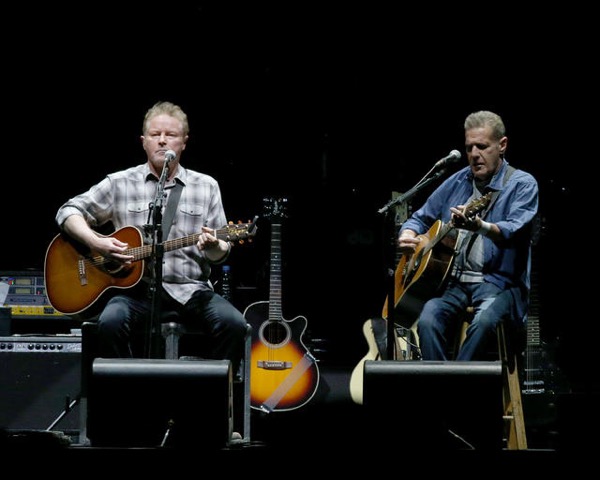 In the beginning: Don Henley (l) and Glenn Frey (Photo by Gary Miller)

Everyone in the packed house should’ve received a free DVD of History of the Eagles. The concert began formally, with Henley and Frey appearing in white spotlights at either end of the stage – waving at each other. The two then came together to duet acoustically on the first song the initial group wrote together, “Saturday Night,” from conceptual sophomore slump of sorts, 1973’s Desperado.

They quickly fell into VH1 Storytellers mode by introducing original member Bernie Leadon, who performed his “Train Leaves Here This Morning” from the group’s eponymous debut a year earlier. Final peak era substitute Timothy B. Schmit appeared next. By the time the intermission rolled around 70 minutes later, they’d reached 1975. And then there were five: (l-r) Henley, Timothy B. Schmit, Bernie Leadon, Frey, and Joe Walsh (Photo by Gary Miller)

Had the hubris brothers let the music do the talking upfront, excised the 20-minute respite, and condensed the two encores into one, the Eagles could’ve shaved an hour off the marathon. Instead, they made sure those that paid a now-standard fossil rock fee of upwards of $200 per ticket got every penny’s worth. That it spooled out precisely like a documentary was perhaps inevitable.

“Austin, Texas,” pronounced proud Texan Don Henley straightaway. “I have a lot of history here. I even remember some of it.”

“Welcome to the History of the Eagles,” countered Frey. “Final lap.”

“We’d appreciate it if you’d suspend your texting and tweeting,” smiled Henley. “As they said in the Sixties, ‘Be Here Now.’”

Reportedly the Eagles had cell phone spotters in the audience, but only the ushers appeared to be enforcing the commandment. The venue staff also made dancers sit down. Before the show began, band manager Irving Azoff walked the floor of the arena.

Onstage, fun also kept to a minimum. Henley kept the beat steady behind the drums, four guitarists (Frey, Walsh, Leadon, and Steuart Smith) did the work of two, and golden four-part harmonies of yore roused now more campfire than country or bluegrass. The first set’s falling dominoes of early megahits belied the Eagles’ debut run of 1971-1980 only in that their radio stranglehold quadrupled over the ensuing decades.

“[In 1978], magazine articles said we were passe,” smirked Henley toward the end of the second half before launching “The Long Run,” which today has every right to gloat. “Look who’s still here.” 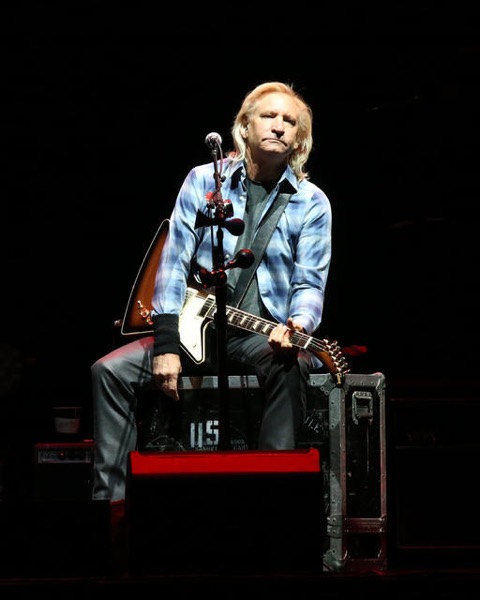 Walsh, actually – the Eagle whose membership in the group even today feels incongruous. He wrote solo smash “Life’s Been Good” while an Eagle, and all four other Eagles appear on its solo album of origin, 1978’s But Seriously, Folks.... His “In the City” still stands out on the Eagles’ swan song the next year, The Long Run, but his guitar workout with Frey, “Funk #49,” funked before the Eagles existed. Encore stomp “Rocky Mountain Way,” another solo hit.

By that standard, Henley’s “Dirty Laundry” and “The Boys of Summer” could legitimately find their way into an Eagles set-list. And have – at ACL Fest 2010. Frey’s “The Heat is On” became a modern standard by virtue of opening Beverley Hills Cop.

Winking, Henley groused about having to follow Walsh’s signature rock star litany “every freakin’ night,” yet after “The Long Run,” the guitarist’s “Funk #49” ignited an axe duel with Frey that segued into “Freebird” moment “Hotel California.” Then, in the second encore, “Rocky Mountain Way” filled up the UT drum in a manner Walsh probably couldn’t muster without the Eagles. The two-part History of the Eagles perhaps demands a third segment – Joe Walsh.