¡Pachanga! By One and All

Pockets of Latinos inhabit every festival. We blend into the masses, meeting up at the small sampling of Spanish-speaking sets, and then disperse again. Pachanga Latino Music Festival’s 10-hour slate at Fiesta Gardens on Saturday turned that isolating experience on its head.

Representatives from Mexico, Spain, Los Angeles, and Chile divided between three stages kept the crowds shuffling between the staggered sets. Though humid most of the day, families spread out on blankets at the Hierba stage and visited the bleachers overlooking a waterway of Lady Bird Lake. Unlike Austin’s string of spring festivals, plumes of marijuana smoke were exceptionally rare.

A woman in her 40s scoffed at my electronic cigarette, declaring proudly in a thick Mexican accent: “I only smoke weed.” Listen to your elders. Proving those latter two cities can work together was the mindmeld behind Compass: the North’s Toy Selectah, and the South’s Camilo Lara of the Mexican Institute of Sound. The early afternoon set burned with “Te Andan Buscando” (They’re Looking for You) from the duo’s eponymous debut LP. Lara complained about the sun, which glared directly at the stage. Austin’s Selena tribute Bidi Bidi Banda closed down four hours at the Niño’s Rock tent with a La Reyna look-alike contest, kicking off the slew of fierce Latina artists. At 3:45pm, L.A.’s Irene Diaz hypnotized the Alt.Latino patio with smoky noir single “I Love You Madly” from her 2013 EP of the same name. Then, with one pause at her Korg, she crushed the good girl, Nora Jones vibe.

“I want to sing a new song for you guys,” she said. “It’s really personal, so I don’t know if I should sing it. It’s called ‘Sweet Sex.’”

In the space between applause, the Alt.Latino crowd bragged about when they first heard the singer’s buttery croon on the airwaves.

Singer-songwriters Maria del Pilar (Santiago) and Mexico City expat Ceci Bastida each dominated their consecutive performances at the HEB Pavilion. Del Pilar sang for her father, who worked overtime to pay for her music lessons as a kid. Bastida, who’s now based in Los Angeles, wrote her latest album, The Age of Violence, to reconcile reading about daily tragedies while pregnant.

“When you’re pregnant, you wish the world would be a better place for the child you’re bringing in,” she told the Chronicle. “I’ve always talked about social issues and what I see happening around me, so being pregnant made that more intense. I started writing about the violence in Mexico, which is ongoing, but got more intense around 2006.” 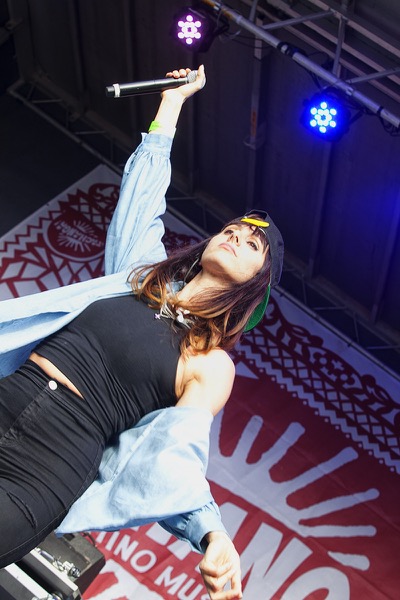 Nobody had more fun at their set than Seville rap sorceress La Mala Rodriguez, who brought out a rabid fanbase – Spanish, Mexican, Texan – which merely shuddered when she soaked them in a barrage of water. Awkward teenagers yelped in excitement when she turned around to reveal deep rips in the seat of her black jeans. Instagram lit up moments later.

Singer/actress Ximena Sariñana arrived fully loaded for the closing set with a sevenpiece band decked out all in white. An understated opening revealed only her voice cutting through the synth, but as she bounced centerstage, the 29-year-old quickly prompted catcalls. During “Parar a Tiempo” (Stop Time) from last year’s No Todo lo Puedes Dar, she hopped in time with the brass flourishes.