Triad heaves chemistry as kinetic as a lightning storm

Sternum-rattling bass. Jittery cymbal crashes. A squall of feedback. Thus did Japanese trio the ZZZ’s announce themselves Sunday to what began as a small audience. By the time they finished demolishing the oxygen around them like an unholy blend of Savages and Unsane, the few had swollen into a slavering pack of wild animals desperate for more. 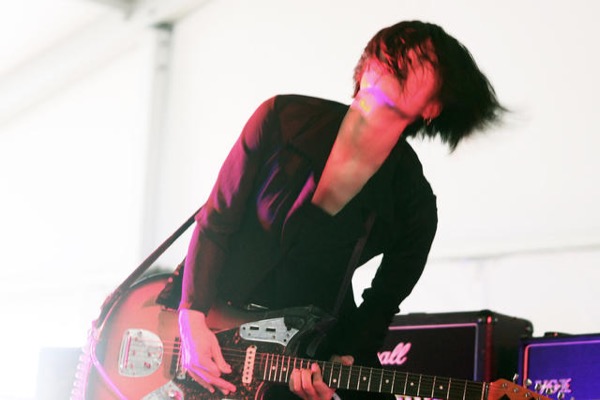 Dressed unsmilingly in black, the three women might have been mistaken for sullen goths were it not for the ferocity emitting from their terrified instruments. Drummer Lyn kept the rhythms in constant motion, moving from skittering jazzercises to roiling tribalism and keeping the songs off balance at all times. Guitarist Youkaku conjured a beastly sound from her Jazzmaster/Marshall/Vox combo, ripping discordant skronk from her ax like a serial killer disemboweling a victim.

She was in total control of the connection between amp, strings, and fingers, even howling into her guitar pickup to top off the pain. Bassist Yukary stoically held the din together while contributing to it via well-timed stabs and thrusting grooves. Vocals took a back seat, but when they did flow it was usually in harmonious contrast to the scree, at least until Youkaku starting chanting like a spellcaster and screaming like a trauma victim.

The band’s two EPs, as good as they are, give only the remotest indication of the incredible power ZZZ’s blasts out.

The set was as much a tribute to the triad’s amazing chemistry as to the lightning storm it created. They courted chaos but grasped its raging tiger’s tail as tightly as a lug nut on a screw. From blasting bash to fractured funk and No Wave noise-mongering, ZZZ’s retained total control over their version of audio hell on earth, exiting in a wave of crunge that left the crowd exhausted, exhilarated, and ready for more punishment.