Another sign that Levitation is leaving its psychcentric focus behind, Chui Wan killed it. The Beijing quartet comes off as a post-punk band soaked in just enough reverb to pass. Make no mistake, however. They’re far more interested in dialing in than tuning out. 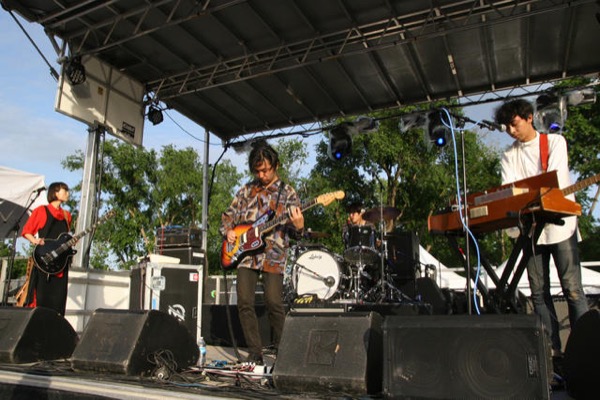 Guitarist Liu Xinyu and singer/multi-instrumentalist Yan Yulong pulled the focus with colorful riffs and echoing vocals, but bassist Wi Qiong and drummer Vincent are the band’s secret weapons. Her rubbery bass grooves, reminiscent of the late, great Mick Karn from Japan (the band, not the country), meshed beautifully with Vincent’s resistance to straightforward rock rhythms. The busy bottom gave the impression of ground constantly shifting under one’s feet.

The pair made the songs supremely danceable, inspiring both hip-driven booty shaking and neo-hippie arm waving in the healthy crowd. Xinyu splashed the rhythm canvas with a variety of colors, from shimmer to skronk, while Yulong contributed Farfisa organ blurts, rhythm guitar thwacks, and vocal exhortations often reduced to wordless grunts. The quartet tempered a tendency to meander with imagination and danceability, as well as the occasional demi-pop song led by Qiong’s pretty keen.

Chui Wan ended smartly by putting art aside. Yulong sawed at an electric violin, Xinyu traded his Jazzmaster for a synthesized bongo pad, and Vincent hit his kit with as unfancy a beat as he could muster, building to the kind of noisy climax every psych band worth its salt musters. Given the crowd’s enthusiastic reaction, the question of whether or not Chui Wan belongs as a psych rock festival is perfectly moot.