Local quartet grooves like nothing else on the scene

There’s an indescribable strangeness to Austin’s “anti-garage” outfit Gloves. It’s not the revolting, standing-at-a-distance-and-point sort of peculiarity. It’s more of a, “Where did you come from and why are you here?” alien quality. The one you’re constantly looking for in music, but usually only back up into.

I found them by happenstance, doing a bill preview for a headlining artist a few months ago. It struck me unusual that they were playing to a hip-hop crowd. They ended up cancelling their appearance, but the inclusion, along with other strange lineup concoctions in odd spaces, only added intrigue.

Prior to release of their exceptional debut, Get It Together, I sat down with the band – minus working singer Ajit D’Brass – over plates of smothered pork chops and greens from Roland’s on the Eastside. 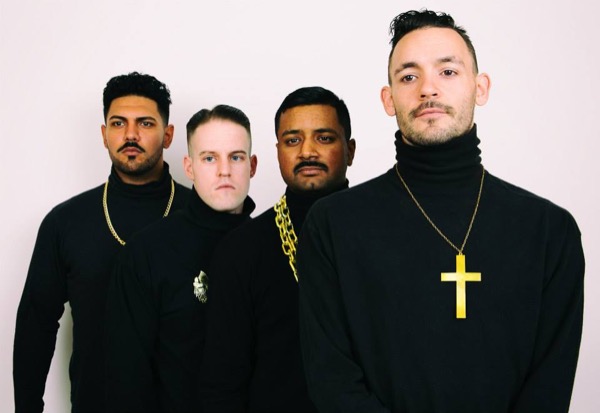 Colton May: It’s a response to the current state of the Austin music scene. Not specifically Austin music, but it’s just reaction to–

Salem Abukhalil: Things that are trending.

CM: To what’s already going on. “How many garage bands does Austin really need?” was kind of our mantra when we started off. We wanted to create something new.

SA: When we first started playing gigs, the only shows we could get were garage gigs, so it was really thin, this already kind of established scene on the Eastside of Austin. Now we’re realizing that we focus on different things like rhythm, groove. People think garage music isn’t [technical.]

They don’t think “woodshed” – consistently playing in the old-school James Brown vein, where you’ve got to drill if you want to be good. [Austin bands] are our competition. We’re going to play circles around them.

AC: At two white, two brown – Indian and Peruvian-Arab – members, Gloves is obviously a very multi-cultural group. Honestly, I don’t see that a lot in Austin, so that also piqued my interest.

SA: That’s why we’re where we are and really open to different kinds of music – our upbringing. We grew up in a part of Fort Worth that was super fucking racially charged with every kind of race representing the free world. You got everything from punk motherfuckers to podunk white kids, and everything in between.

That constantly affects you growing up. It definitely keeps you more open to other cultural dividends, but the music specifically.

AC: I’m interested in your process. In terms of percentage, how far along is the actual music before you get to the vocals?

AC: It really gets that far down?

SA: Yeah, because the way we see it, we try to max it out. We think, “How well can we flesh this out to make a good pop tune?”

CM: We write the song good enough where [it stands alone.] There’s enough there right now without vocals because we’ve already we got an interesting top part, the bass and drums, as a unit.

BF: It’s the groove. We got a groove. I mean, in some ways the groove is there and the idea is there, but the structure, we always mess with structure.

SA: We’ll start it, and we try to get that specific groove as interesting as possible in the allotted amount of time. Once we’re happy with it and we’ve given it a stamp of approval, then we’ll add vocals and bounce around ideas.

AC: I’ve asked around, “Does this sound like anything you’re hearing right now?” Everyone says no.

SA: We also have a lot of tricks up our sleeves because a lot of kids our age just don’t listen to [certain bands.] They don’t give it chance. They don’t give Parliament a chance that much anymore. They don’t want to listen to the music that affected those [rock] guys. If you really want to take it seriously, you’ve got to dig.

CM: [We] like to step out of that boundary, so that it pushes us in a different direction. There’s nothing wrong with sticking out like sore thumbs, because then you’re sticking out.

Gloves
Get It Together (Record Review) 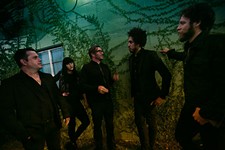