Last Saturday, Sir Elton John followed Jerry Lee Lewis on the Acura stage at the New Orleans Jazz & Heritage Festival, and, for all intents and purposes, lit the thing on fire.

From an aerial view, the horde looked not unlike an ant pile crushed underneath some unsuspecting sneakers. One festival-goer, talking to The Advocate, compared the scene to a heart attack: “Everything was choked. There were no arteries to move.” 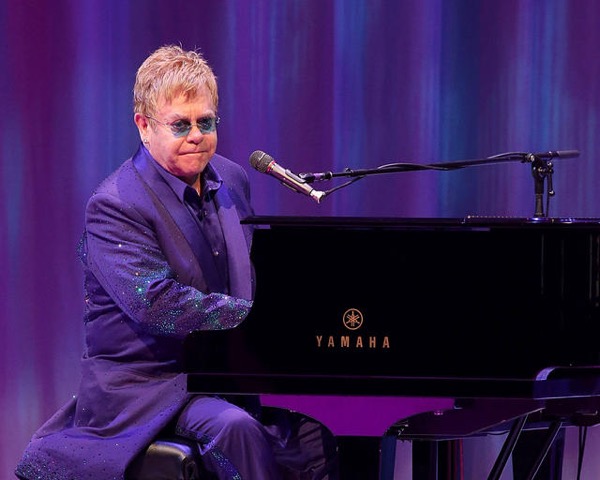 Two nights later, just before 10pm, John shuffled onstage solo at a sold-out Moody Theater for the Andy Roddick Foundation’s 15th birthday party. The UK pop icon sat at the piano with the grace of a prizefighter to begin an hour-long set, his initials bedazzling the back of his royal purple suit. Screens on either side of the stage magnified him as he cavalierly thumped out the opening lick of “Tiny Dancer.”

Booming auctioneer antics still ringing in their ears, the upper crust populating tables on the floor in front of the stage froze.

“For those of you who don’t know how I write songs,” he noted that he and lyricist Bernie Taupin are never in the same room together. The wordsmith constructs a vessel and the pianist animates it. “Forty-eight years and we’ve never had an argument,” joked John. “That’s probably why.”

Reading the lyrics to “Your Song” for the first time, John said he couldn’t believe a twentysomething had written them. Even more curious is how the 68-year-old pinball wizard still caresses the hit after all these years. The subtle hesitation over, “Anyway the thing is, what I really mean,” had the balcony twitching.

The exquisite extended intro to “Rocket Man” coaxed notable snorts from a couple of husbands squirming in the audience, but once the astral fuzz attained maximum intensity the only sounds were excited yelps. Tinkering with his own echo, John reached heights on the song that made reentering our atmosphere seem like a pipe dream. The set was only half through, but that could’ve been John’s walk-off moment.

“I would like to pay tribute to Andy and his foundation,” said John. “I’m proud of him.”

Roddick, in fact, started laying the groundwork for the program when he was 17. Monday night, he was lobbied by his superstar fundraiser to name any future son Bilbo. No coincidence that John named his son Elijah.

“Benny & the Jets” brought out the piano-smashing performer of old, if not the recklessly high notes. Losing himself in the Yamaha, John pulled off the piano equivalent of one of Stevie Ray Vaughan’s heavy-lidded solos. The crowd could’ve left through the emergency exits and he would’ve kept on playing.

A staccato rendition of “Philadelphia Freedom” let everyone catch a breath before he devastated with “Candle in the Wind.” Though the ballad remains a natural closer, it served as fitting tribute to the newest addition to the royal family, one named Charlotte Elizabeth Diana. 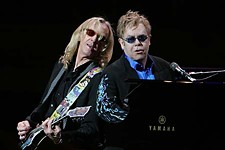